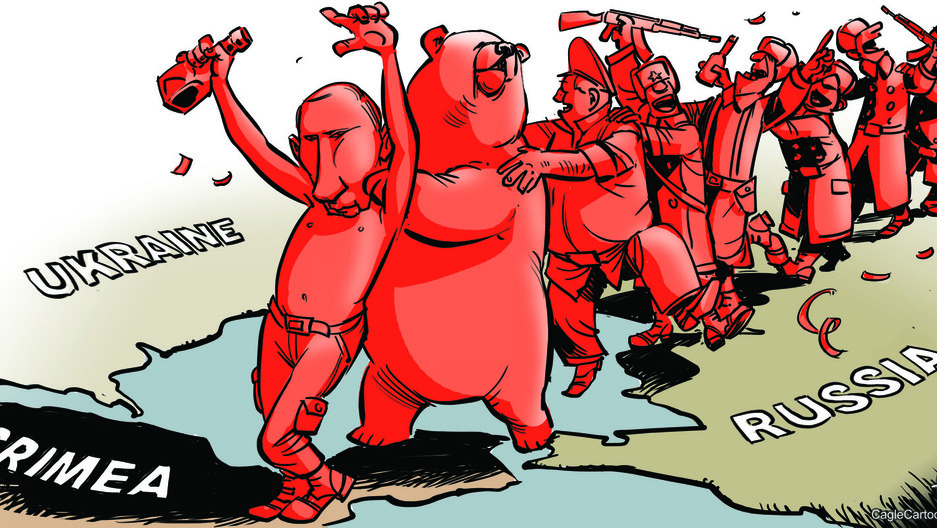 Turns out Crimea was just a detour in Putin's Carnival celebration.

Russia already has troops stationed in Crimea, but, depending on who's talking, they seem to have sent more. Or perhaps they've just left their bases? And just what is Crimea? And, if it's Ukrainian, why does the majority of the population speak Russian?

If you are like most, you probably have many questions about the current situation in Crimea. Mashable has a post that answers nine basic ones, including why does the U.S. care what happens to Ukraine? Our favorite: If the situation continues to escalate, which parts of Crimson Tide are most/least likely to occur?

The world of social media marketing is fraught with peril, as Indian supermarket chain Big Bazaar is discovering. To advertise the value of their products, they started the Twitter hashtag #With50RupeesICanBuy and offered vouchers worth 1000 rupees (roughly $15) to some of the participants.

Every revolution needs a theme song

Angry at high levels of crime, inflation and food scarcity, tens of thousands of Venezuelans around the country have poured into the streets to protest in the last month. At least 18 people are thought to have died in the anti-government protests. And the growing movement has found its soundtrack.

Protesters have been using social media to share Será, an album from the Caracas rock band La Vida Boheme. Lead singer and songwriter Henry D’Arthenay spoke to PRI’s The World about how one song in particular — Aún” (“Still”) — has become a sort of anthem for the movement.

What illegal product has a street value of $10,000 per pound? Obvious, eh? Rhino horn. It’s highly valued by practitioners of Chinese medicine, and as a result, record numbers of rhinos are being illegally hunted in Africa — to the point that some species are now facing extinction.

Many African nations already have measures in place to try and halt the illegal trade — and they haven't really helped. So what can be done? PRI’s The World heard from Ray Dearlove of the Australian Rhino Project about a novel solution — moving enough rhinos to Australia to create a viable breeding herd.

New Zealand got hit with what's being called a "once-in-a-lifetime" storm on Wednesday. Between six and seven inches of rain fell on the island-country in a single 24-hour period. The rains led to substantial flooding and also brought with them strong and damaging winds. In the city of Christchurch, residents were urged to avoid all travel while city officials tried to clean up the damage, according to The New Zealand Herald.