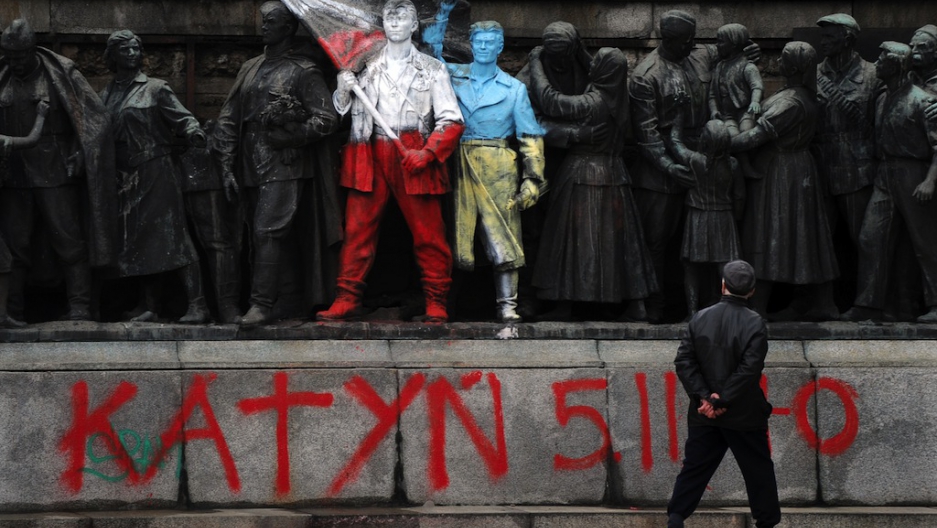 A man looks at the figures of Communist soldiers, painted in the colors of the Ukrainian and Polish flags by an unknown artist and with signs "Katyn 5.03.1940" in central Sofia on March 5, 2014. The Communist era monument was painted overnight in Ukrainian and Polish national flag colors with texts reading "Putin go home!" "Crimea 2014" and "Katyn 5.03.1940".
Credit: NIKOLAY DOYCHINOV
Share

PROVIDENCE, Rhode Island—It’s easy to recognize both analytical failure and diplomatic incompetence after the fact. While many can now fault Europe and the United States for failing to prevent the Russian invasion of Ukraine, we must now figure how to facilitate Russia’s withdrawal.

Clarity is essential in analytical thinking in the midst of crisis, and we come together—one brother an expert on security and Russia, the other an expert sociologist on Poland and Ukraine—to consider how to challenge Russia to save Ukraine.

First, the risk of escalating war must be avoided at all costs. Ukraine is already doing that, refusing to engage militarily over Crimea, but mobilizing to protect itself from an invasion of its mainland.

Ukraine cannot stop Russia by itself, but it can, and will, inflict substantial casualties on Russian soldiers although its own civilian losses will be considerable. Still, such a military confrontation is unacceptable.

At the same time, NATO must provide Ukraine with the support it needs to deter further aggression.

What are the West's military options to counter this blatant act of aggression? While many NATO nations, including the bordering state of Poland, have highly capable forces, none–including the US–has the capacity to challenge Russian forces on the ground in Ukraine.

The best the West can hope to do militarily is facilitate resistance through airpower if requested by Ukraine, a NATO Partnership for Peace nation. But no NATO nation wants to get involved in a shooting war.

Brinksmanship could set the conditions for an unwanted military engagement through incremental measures such as establishing NATO AWACS orbits over eastern Poland. This tactic would enable NATO to monitor Ukrainian airspace, and/or conduct a no-warning air defense exercise in Poland. An exercise of this kind would involve rapid deployments of non-Polish NATO air defense capability to Polish skies, including the F-22, the best fighter in the US inventory.

If NATO ups the ante, military risks for Russia would be dramatically increased. But alone, these moves would be secondary to the main focus: the Russian economy.

In 1998, Putin's Russia carved out Georgian territory without consequence. Now Putin is rerunning that script in Ukraine.

Will the West refuse once again to impose consequences? With Washington remaining hopelessly mired in the naïve belief about Putin's willingness to work with the United States, consequences are probably the last thing on the Obama administration's mind.

Economic sanctions must be imposed—and quickly—to hurt the foundation of Russian imperialism. Russian assets must be frozen, all trade cut off, and the economic infrastructure of Russia and its oligarchy put at risk.

Such consequences will get the attention of even the most nationalistic of Putin's empire-rebuilding supporters. It worked in Serbia, during the assault on Kosovo, when NATO targeted Serbian elites' economic interests, bringing Milosevic to the table. It can work again.

The real economic costs for Russia’s ruling class, and indeed its entire country, will be starkly evident without any policy work. The Russian economy will decline sharply, as Western investors and creditors dump Russian commercial ties like the risky bets that they are.

This process will be intensified if Western banks are no longer homes to the massive capital flight Russian oligarchs regularly stimulate with their transfers of wealth. Austria could take a lead here, given its banks’ deep ties to Russia’s ruling economic class.

Finally, and absolutely, all actors must work hard to distinguish between Putin’s criminal regime and the Russian people. The demonstrations protesting this war in Russia today are not overwhelming, but they are incredibly brave, facing repression by Russia’s own police. A hashtag is already circulating in Russia: #NotoWar.

Compelling people-to-people diplomacy is going on when Ukrainian students communicate directly to Russian students: "We ask you to tell your leaders not to kill us."

These demonstrations will grow as the costs of this criminal aggression in Ukraine become more apparent to the Russian public. One might hope that Russia’s oligarchs will recognize the risk Putin’s reckless intervention incurs for the Russian economy, and do something about it. And one might hope that Western leaders will recognize the danger Putin himself poses, and push back this greatest threat to global peace the world has seen since the end of the Cold War.

Floyd D. (Ken) Kennedy, Jr. is a retired U.S. Navy intelligence officer who specialized on the Soviet Union. Michael D. Kennedy is professor of sociology and international studies at Brown University. He is the author of the forthcoming book Globalizing Knowledge: Intellectuals, Universities and Publics in Transformation (Stanford).