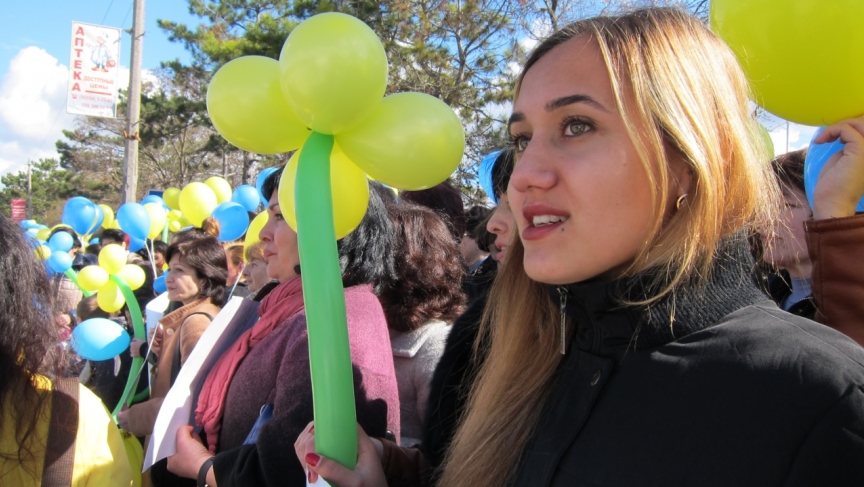 Crimean Tatars demonstate to keep Crimea part of Ukraine. They're holding yellow and blue balloons, the colors of Ukraine's flag.

Like many 15 year olds around the world, Medina spends a lot of time on Facebook. But unlike most teenagers, she logs in to discuss politics.

Medina is a Crimean Tatar. Crimean Tatars make up 15 percent of the Crimean peninsula’s ethnically-mixed population. And with the Russian troop presence in Crimea this past week, tensions are running high.

“The most popular subject for discussion for me and my friends is definitely the current situation here in Crimea,” Medina says. “We are always exchanging messages, updating each other on the situation. We’re worried.”

As the crisis over Crimea continues, everyone is on edge, but especially families like Medina's. Crimean Tatars are Muslims, the indigenous people of the peninsula. In 1944, Stalin deported the entire Tatar population of Crimea to Central Asia.

In the family’s living room, Medina's grandparents Zenife and Zavre watch the news. Her grandparents were among the first Crimean Tatars to return to Crimea in 1969. Thousands followed in the 1980s, even though discrimination against the Crimean Tatars continued until the collapse of the Soviet Union in 1991.

Now, once again, fear has returned.

Zenife says in the past few days, a few of her Tatar neighbors found their houses marked with crosses. She says Crimean Tatars are scared of the dormant ethnic tensions that the Russian troop presence has stirred up.

“We have nowhere to go," she says. "Russians have Russia, Ukrainians can go to Ukraine, but Crimea is our only home.”

Every day, Zenife has been participating in peaceful protests against the Russian troops. Most of the demonstrators are women and children. They wave blue and yellow balloons, the color of the Ukrainian flag. “Crimea is Ukraine,” the women shout. Across the road, Russian troops in balaclavas stand in front of a Ukrainian military base, blocking the entrance.

Long ago, Crimean Tatars had their own state, but now they believe their best chance of survival is with Ukraine.

At a Crimean Tatar Television station called ATR, one of the top stories of the day is the visit of an official delegation of Muslims from Russia, who have come to meet with Crimean Tatars.

“We can see how actively the new Russia-backed government in Crimea is trying to get Crimean Tatars on their side,” says Linur Yunusov, a journalist at ATR. “They are promising financial packages and government posts. There has been a whole string of delegations from Russia's Muslim regions trying to negotiate with us because the future of this pro-Moscow government depends on whether Crimean Tatars support it or not.”

Tatars represent only a small piece of Crimea’s population, but, politically, they matter. Crimea's new pro-Moscow government plans to hold a referendum in May on greater autonomy for the peninsula from Kiev — and they need Tatar votes. On Thursday, they moved that referendum up to March 16.

Eskandar Bariiev, a deputy in the Mejlis, the representative body for the Crimean Tatars, says he worries that the Russians will make an offer that the Crimean Tatars will find hard to refuse, a sort of autonomy that that they have always dreamed of.

“It will put us in an incredibly difficult position,” he says, but with memories of deportation still alive, he can't imagine Crimean Tatars aligning themselves with Russia.

Still, the pressure on the Crimean Tatars is increasing. They worry about what will happen if they continue to refuse to back the new regime.