Just about everyone who travels takes digital snapshots these days. The other day, a friend told me he'd snapped 400 pictures during a recent trip to Paris.

It's so easy with an iPhone that doubles as a camera.

Jorge Ayala, a sound artist based in Toronto, Canada, describes himself as someone who focusses on the sounds — not the sights.

"One of the things I like to do when I travel is capturing the sounds of the places I visit. It helps me remember the place in a different way than a photgraph would ever do. 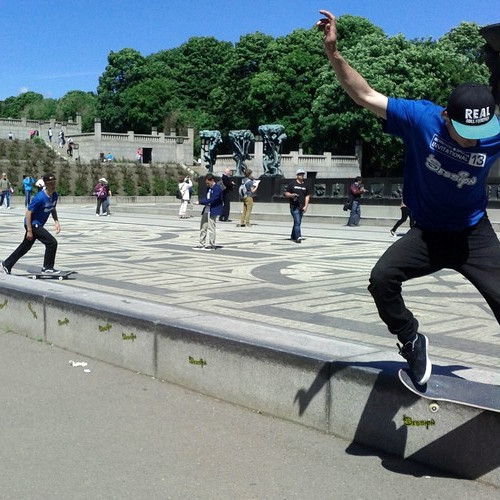 "One of the sounds ... I recorded at Vigeland Park, one of Norway's biggest sculpture parks. The sculptures were made by Gustav Vigeland, one of Norway’s most outstanding sculptors. Vigeland also designed the park. As I walked around the park, I started hearing all these sounds. It sounded like skateboarders. It was a contest, some sort of competition," he recalls.

The skateboarders, it turns out, were pretty good. There were probably 30 or 40 of them doing flips and jumps and all kinds of tricks.

"All of their tricks were really on point. I sat down to watch it and pulled out my recorder. I was pretty close to where they were, so I closed my eyes and I listened, and I realized that it was something I needed to capture," he says.

"It's a very specific sound that triggers memories of my youth and my friends. I used to skateboard [in Toronto,] but I was pretty bad at it. I totally sucked. So I would do it because I wanted to learn, but I realized that this was not for me. So I just liked to hang out with my friends. It was like they would be doing all this cool stuff and there's me cheering them on and trying my thing, but never really going anywhere to be honest. Just having a good time with my friends.

"I don't remember seeing anybody falling or doing anything ugly, but hearing the skateboarders at Vigeland was a very lovely experience," he says. And he wants all of you to do something similar.

"Just grab your phone and pick a soundscape that interests you and record it. It will give you different ways to remember a place. Those sounds were really some of the prettiest ones I've heard in a long time," he says.

The answer to our Geo Quiz is Oslo, Norway, home to the Vigeland Sculpture Park.

Some of today's Geo Quiz text game winners include: Jared in Bethesda, Maryland, Bradley in Bosner, Wyoming, and Kristen in Greenwood, Washington. To play along with the Geo Quiz next time, text "GeoQuiz" to 69866.