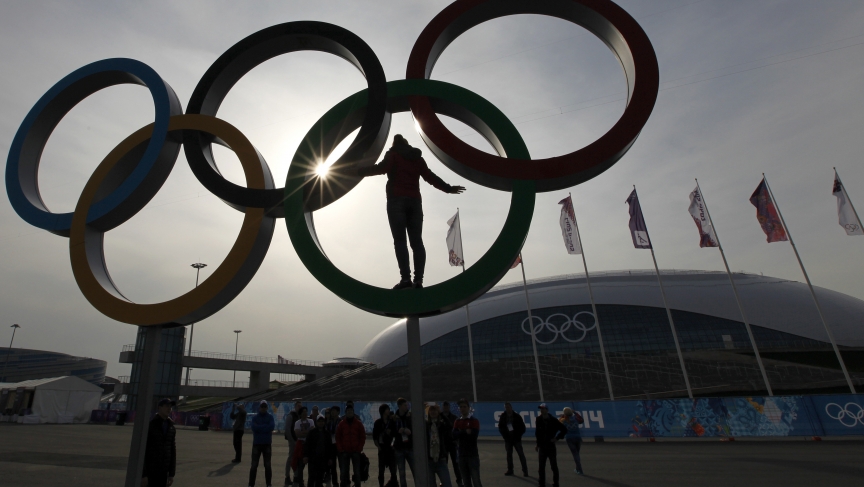 A woman stands in a set of Olympics rings as she has her picture taken at the Olympic Park a day after the closing ceremony for the 2014 Sochi Winter Olympics, February 24, 2014.

There’s been so much focus on Ukraine, we almost forget that just a short time ago we were talking about the “twizzles” of ice dancing. Those were good times.

The Sochi Olympics were widely considered a success. They helped introduce a new image of Russia to the world. Gone was the image of a powerful, aggressive Russian bear and in its place was the image of a cuddly cartoon bear that’s easy to hug. Russia was a modern society at peace with its tumultuous past.

The Moscow Times' Yakaterina Kravtsova covered the Olympics. But she says the events in Ukraine have completely overshadowed the games. They’re also overshadowing the Paralympics set to start at the end of the week.

“Even if we look at social media feeds, you can see that no one speaks about the Olympic games,” she says.

She says the change in focus started before the closing ceremonies. Journalists started to leave the games to travel to nearby Crimea. They sensed a story. And their senses were right.

Ukraine has become a big story. And Russian President Vladimir Putin helped turn it into a gigantic one by sending troops, or what he calls volunteers, to the area. To outsiders, it looks like an invasion of another country to sustain Russia’s navy and military might. But Putin’s choice damaged the $50 billion investment Russia made to change its image.

Kravtsova says a complete makeover was always an uphill battle. “Even the Olympics could not completely change Russia’s image in the minds of people all over the world,” she says.

She says Russians don’t even understand what their government is doing. “Some people are ashamed that we have such a government which can use force against Ukraine, because Ukraine is culturally and historically very close to Russia,” she says. “I mean, people in Russia have friends and family there — and they travel there.”

She adds that people are scared. “When the upper house of the Russian government federation council approved Putin’s decision to use force against Ukraine, everyone was talking like, ‘We don’t want war,’” she says. “It is a reality. There could be war.“

Her words make you miss those twizzles.