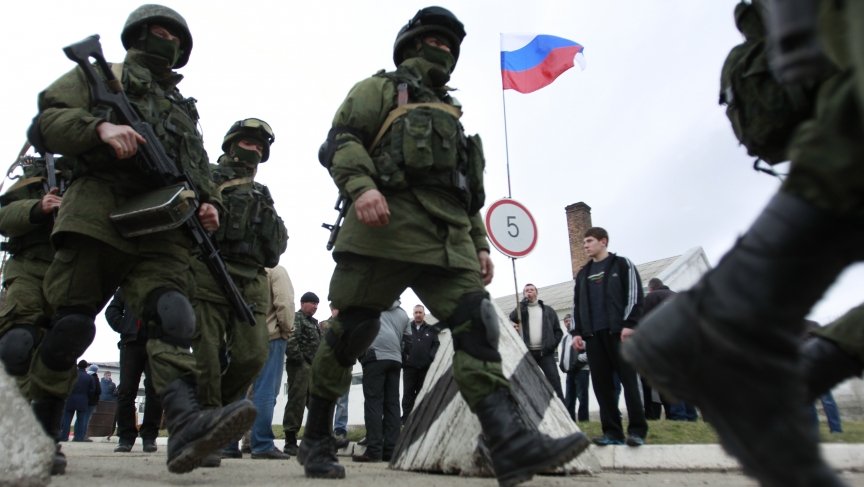 Military personnel, believed to be Russian servicemen, march outside the Crimean city of Simferopol, March 4, 2014.

Russia's intervention in Crimea and threat of further actions in Ukraine has created a crisis for Europe and the US. But beyond Ukraine, the move threatens to derail any progress in solving the conflict in Syria.

Washington wants to finish the task of eliminating the Syrian government's stockpile of chemical weapons, and to finally set in motion a process of political transition to some kind of post-Assad future for the country. Yet the Obama administration will need Russian help to achieve those goals. And events in Ukraine make help from Moscow appear less likely.

Secretary of State John Kerry made a symbolic visit to Kiev Tuesday, meeting with members of the interim government and paying his respects at memorials for anti-government protestors killed in the streets of the capital. The secretary said the US is not going to walk away from Ukrainians who are still fighting for democracy and freedom.

“We are committed and we are going to work to do what we can within our system as rapidly as possible,” Kerry said.

“We have lots of options,” Kerry went on to say. “But none of us want to escalate this so that it becomes the kind of confrontation where people can't find a reasonable path forward.”

Kerry also criticized Russia directly, warning that “you cannot invade another country and dictate your demand down the barrel of a gun.”

But Mark Katz, an expert on Russian foreign policy at George Mason University, says Moscow is feeling pretty confident now that it has forcefully brought a strategically important part of Ukraine under its security umbrella.

“The Russians believe that they have been successful in Crimea, that the west has backed down and that through hanging tough with regard to Syria as well, they may get a similar result,” Katz said.

When it comes to Syria, the US and Russia find themselves in an awkward partnership. And Syrian President Bashar al-Assad is a major point of disagreement. The Obama administration still says Assad has to go. The Russians do not agree.

Katz said Putin puts a great deal of importance on the value of loyalty and standing up for one's political allies. Successfully protecting Assad in Syria, Katz said, would send a strong message to other authoritarian leaders on Russia's borders, especially in Central Asia.

“These guys in Kazakhstan, Uzbekistan, Kyrgyzstan, Tajikistan and Turkmenistan, they have a choice. They can rely either on Russia, or on China, possibly on both,” Katz said. “If they see Russia as not being supportive of Assad in Syria, this may incline them to lean more toward China. And if they do, it's not clear that there's much Russia could do to stop them.”

If Assad were to be toppled by the Syrian opposition, it would follow on the heels of the recent humiliating ouster of Viktor Yanukovych, Russia's former ally right next door in Ukraine. That eventuality is something Putin will try to prevent, according to Andrew Tabler. He's an expert on Syria at the Washington Institute for Near East Policy.

“Russia now is looking at President Assad as a necessary evil, for the time being,” Tabler said. “Clearly, a much more assertive approach by Russia — and an aggressive approach in the case of Ukraine — is winning on the chess board.”

But the US and Russia still say they'd like to cooperate in Syria. And that is especially true when it comes to the goal of ridding Syria of its chemical weapons stockpile and its means for manufacturing those weapons.

Tabler reckons that the late June deadline for the complete destruction of Syria's chemical weapons will not be met.

“Still outstanding is Syria, until now, has not agreed to destroy its 12 declared chemical weapons sites. It has only agreed to inactivate them by welding the doors shut,” he said. “That's not in keeping with the chemical weapons convention that Syria signed.”

Getting Syria to meet that requirement will likely require some pressure from Russia. But Moscow is clearly focusing its diplomatic energy on the situation in Ukraine right now. So, Tabler said, “bandwidth is a problem.”

He added that the White House has put itself in a tough spot by making the elimination of Syria's chemical weapons such a high priority. “If that is delayed significantly, especially before the mid-term elections in the United States, that's a way that Russia puts a lot of pressure on President Obama."

There are two more things to watch to see if there is still hope for Russian and American cooperation in Syria, Tabler said. First, the ongoing talks aimed at setting up safe corridors for the delivery of humanitarian aid. And second, the next round of negotiations aimed at finding a political transition in Syria.

Russia's approach toward these negotiations, Tabler said, will be good indications of how much Washington can count on Moscow for help in Syria.