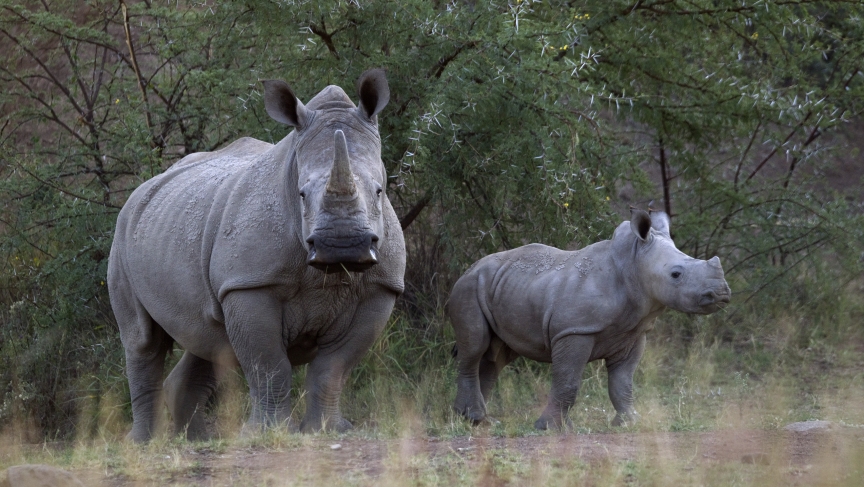 A White Rhino and her calf walk in the dusk light in Pilanesberg National Park in South Africa. In South Africa, nearly two rhinos a day are being killed to meet demand for the animal's horn, which is worth more than its weight in gold.

Record numbers of rhinos are being poached and killed in South Africa for their horns. The main reason is that a pound of rhino horn is worth about $10,000 on the black market.

That market is largely driven by practitioners of traditional Chinese medicine, who consider the horn an effective medicine. The trade has gotten so bad that certain species of rhino are now threatened by extinction because of poaching.

So in steps Australia with a novel idea for protecting rhinos, by moving them.

"The plan is to import a sufficient number of black rhino and white rhinos into Australia from South Africa to form a substantial breeding herd which will assist in securing the future of the species," said Ray Dearlove with the Australian Rhino Project.

"That's what we're trying to do. There is an existing population of rhinos —  a small one — at Taronga Zoo [where] there’s a group of about 10 or so black rhinos and a smaller group of white rhinos."

In recent years, poaching levels in South Africa have skyrocketed. Last year, a record 1,004 rhinos were illegally killed in South Africa. That's up from 668 the year before.

Rhinos are easily poached. They visit water holes daily and can be easily killed while they drink. And most of this poaching takes place in Kruger National Park.

"Our plan would be to have ... a breeding herd of at least a 100 within three years," said Dearlove. "Our first step is to bring in a group of about 20 or 30, to provide some genetic diversity. And hopefully, the breeding program goes well and we can have a safe and secure area for these rhinos."

The temperate Australian climate is considered an ideal habitat for the species.

But one of the challenges facing the conservationists is how to transport these creatures. A white rhino can weigh as much as 5,000 pounds.

"Someone has suggested the Noah's ark concept, but we're not going to go with that one," said Dearlove. "It's a challenge. The [rhinos] would basically be crated and sedated on the South African side and then [flown] from Johannesburg. There would obviously be a couple of [veterinarians] on the flight."

The flight might be unpleasant for the rhinos, but it's a safer option than keeping them in South Africa.

"As you would expect, there is a great deal of sensitivity about this on all sides," said Dearlove. After all, South Africa is viewed as the primary custodian of Africa's rhinos. "We are not saying that this is the ultimate answer," he insisted.

"The reality is that the South Africans have realized that they have a major problem ... they, to their credit, are looking for every alternative and option to see if they can solve this problem because the poaching is not going to go away."