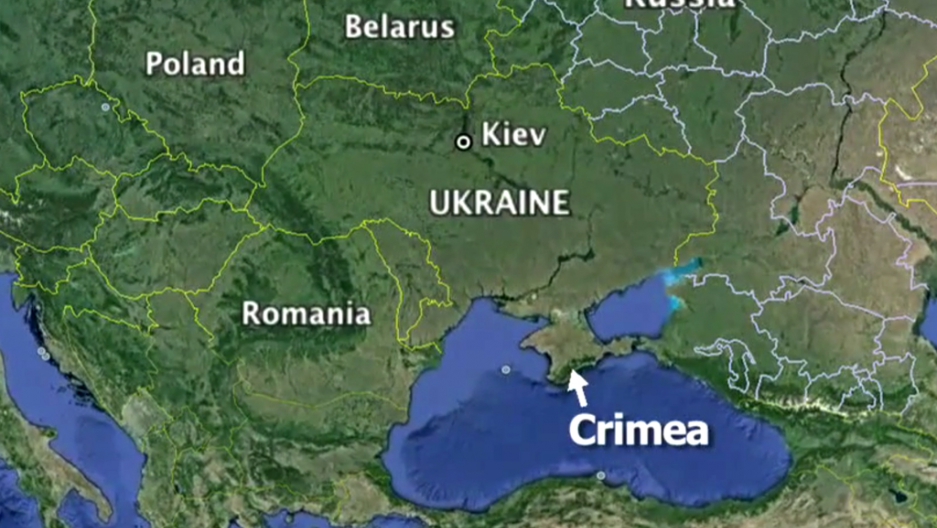 Events in Crimea are unfolding so quickly it’s hard to keep up. As Al Jazeera notes, “Ukraine's autonomous peninsula has become the focal point of new global geopolitical tensions.” In the past few days alone:

- The world’s political leaders have begun to talk consequences.

There's a lot of excellent analysis on what's been happening since the Euromaidan protests ushered in a new government in Kyiv. And you can follow GlobalPost’s live reporting here.

But even with such great coverage, you might still be stumbling over certain terms. So here’s a quick glossary to provide extra background, presented in narrative instead of alphabetical order.

Crimea is a Ukrainian peninsula in the Black Sea with geographic, political and historical ties to Russia. It’s also the flashpoint of escalating tensions between Ukraine and Russia. The region is home to about 2 million people: ethnic Russians in the south (58 percent), ethnic Ukrainians in the north (24 percent) and Muslim Tatars caught in the middle (12 percent).

“Russia has been the dominant power in Crimea for most of the past 200 years, since it annexed the region in 1783,” notes the BBC. In 1954, Crimea was transferred to Ukraine — then part of the Soviet Union — which some ethnic Russians view as a “historical wrong.” The region voted heavily for Viktor Yanukovych in the 2010 presidential elections and many believe the deposed president is the victim of an illegal coup. In recent days, pro-Moscow demonstrators have marched in several cities and called for Crimea to separate from Ukraine and join Russia. Moscow has some 6,000 troops on the ground and reportedly has “complete operational control” of the peninsula.

Crimea is legally part of Ukraine but has semi-autonomous status, meaning it can elect its own regional parliament and appoint its own prime minister, seated in the capital Simferopol. So its official name is the Autonomous Republic of Crimea. On Feb. 27, Crimea’s parliament appointed an unofficial pro-Moscow leader, Sergei Aksenov, during a legislative session held while masked gunmen occupied the building. Crimea lacks authority to conduct its own foreign policy but Aksenov declared himself “commander of all armed forces and police” in Crimea and asked for Russia’s help in restoring order in the region. On March 1, the Russian parliament authorized military intervention in Ukraine to protect Russian interests and Russian speakers.

Since the Euromaidan political crisis, there’s been a resurgence in demands for Crimea to secede from Ukraine, particularly among ethnic Russians who reject Kyiv’s new leadership. A number of factors make this scenario plausible — the presence of Russian forces and paramilitary groups, public declarations by regional authorities and a large base of public support. But even for Crimeans who want secession (and many don’t), it could increase the region’s economic isolation while strengthening anti-Russia forces throughout the rest of Ukraine. Michael Hikari Cecire writes for Eurasianet: “Looking at the big picture, Russia’s preferred geopolitical play isn’t to peel off Crimea; it is to re-integrate Ukraine as a whole into the Kremlin’s Eurasianist system.”

Crimea’s Turcic-speaking Muslim Tatars — the peninsula’s original inhabitants — make up about 12 percent of the population. They support the new leadership in Kyiv and recalling a long history of Russian oppression, staunchly oppose separatist demands. In 1944, Soviet leader Josef Stalin forcibly deported all 200,000 Crimean Tatars to Central Asia for supposedly collaborating with Nazi Germany and resettled Russians in Tatar homes. Nearly half died within the first year of exile. Most Tatars returned to Crimea when the Soviet Union collapsed and by virtue of their ethnicity, helped Crimea gain greater autonomy from Ukraine. Although Tatars are caught in the middle of the Moscow-Kyiv power struggle, neither side has addressed the situation and rights of the Tatar community.

Simferopol, Crimea’s administrative capital, has been at the center of rival demonstrations between pro-Kyiv and pro-Moscow supporters. Things escalated rapidly last week when Russian-speaking gunmen seized control of the Crimean parliament, administrative complex and airport, and blocked off roads leading to and from the capital. On March 2, a convoy of hundreds of Russian troops were seen heading from Sevastopol toward Simferopol. The Guardian reports, “Russian troops have surrounded at least two military bases in Crimea and approached others seeking to gain access or get hold or their weapons” — including the Perevalnoe base, located 20 kilometers outside Simferopol.

The Crimean port city of Sevastopol hosts a major Russian naval base, where Russia keeps its Black Sea Fleet. The base, which Russia rents from Ukraine, allows Moscow to project its influence into the Black Sea, eastern Mediterranean, Balkans and Middle East. In recent years, Russia has used the base to launch operations in Georgia, Libya, Syria and the Indian Ocean. Sevastopol is also home to Ukraine’s Naval Forces, a fleet of 10 warships. The recently appointed head of Ukraine’s navy, Denys Berezovsky, faces treason charges after surrendering naval headquarters to pro-Russian forces. About 380,000 residents live in Sevastopol, including 15,000 Russian servicemen and additional military retirees. Its city council recently installed a new mayor, Russian citizen Aleksei Chaliy, and its police chief has stated that officers will not carry out “criminal orders” from Kyiv.

Russia’s Black Sea Fleet is headquartered at the Sevastopol naval base, along with 15,000 Russian naval personnel. It consists of a few dozen warships, many of which date to the Soviet era. Mark Galeotti describes the fleet in The Washington Post: “The Moskva, an aging guided-missile cruiser; a large anti-submarine warfare cruiser — very dated; a destroyer and two frigates, which are more versatile; landing ships; and a diesel attack submarine.” Under the terms of Russia’s lease, any military movement outside the base must be authorized by Ukraine. While Moscow has vowed the Black Sea Fleet is adhering to the agreement, the Guardian reports that two Russian anti-submarine warships have been seen in Sevastopol’s bay.

The 2010 Kharkiv Pact extended Russia’s lease of the Sevastopol base until 2042. The agreement was negotiated by now-deposed Ukrainian President Viktor Yanukovych in exchange for discounted natural gas from Russia. International Business Times reports, “The Kharkiv Pact was heavily criticized by pro-European Ukrainians. The current opposition has threatened to annul the Kharkiv Pact and kick out the Black Sea Fleet in 2017.”

The “Budapest Memorandum on Security Assurances” is a diplomatic agreement signed by Ukraine, Russia, the United States and the United Kingdom in 1994. Under the memorandum, Ukraine agreed to give up its nuclear weapons, part of a larger process of denuclearizing the former Soviet republics. In return, the three nuclear powers promised to respect Ukraine’s sovereignty and territorial integrity. By invading Crimea, “Putin is signaling that all agreements signed during Russia’s period of weakness in the 90’s are null and void,” according to Forbes.

NATO — a political and military alliance of 28 member states — has held lengthy, high-level emergency talks and issued strong language about the “grave situation in Ukraine.” NATO Secretary-General Anders Fogh Rasmussen has accused Russia of threatening peace and security in Europe and of violating the UN charter, and called on Russia to “de-escalate.” Since Ukraine isn't a NATO member, the United States and Europe aren't obligated or likely to intervene militarily. Instead NATO has stressed a political resolution: “We urge both parties to immediately seek a peaceful resolution through dialogue, through the dispatch of international observers under the auspices of the United Nations Security Council or the OSCE.”

The Group of 7 (G7) consists of the finance ministers of seven leading industrialized nations: the United States, Japan, France, Germany, Italy, the United Kingdom and Canada. The Group of 8 (G8) is a forum for the G7 governments, plus Russia. Russia’s G8 partners suspended preparations for a summit to be held in Sochi in June. Instead it released a statement condemning Russia’s actions and called on it to engage in direct negotiations, international observation or mediation through the United Nations or the Organizaton for Security Cooperation in Europe. US Secretary of State John Kerry told NBC’s Meet the Press that unless Russia withdrew forces from Ukraine, it could be expelled from the G8 and face economic sanctions: “[Putin] may find himself with asset freezes, on Russian business, American business may pull back, there may be a further tumble of the ruble.”

Events in Crimea have drawn comparisons to 2008, when Russia went to war with Georgia over two separatist territories. After Georgia launched a campaign against South Ossetia, Russia sent troops into South Ossetia and Abkhazia to protect its Russian speakers. NATO declined to intervene and French mediation ended the conflict. The BBC reports that the stakes in Crimea are much higher: “Moscow resents what it sees as EU and NATO overtures to Ukraine. This is not just a geopolitical battle for influence in Russia's backyard. President Putin is seeking to protect land that he regards as historically and culturally tied to Russia.”

Recent events have also drawn comparisons to the early 1990s, when Transnistria declared independence from Moldova. Russia backed the province, which has a large ethnic Russian province, and a brief regional war ensued. The Atlantic reports: “Russia now stations troops on the wisp of land along the Ukrainian border, and provides Transnistria with financial assistance. Negotiations to resolve its status are frozen.”