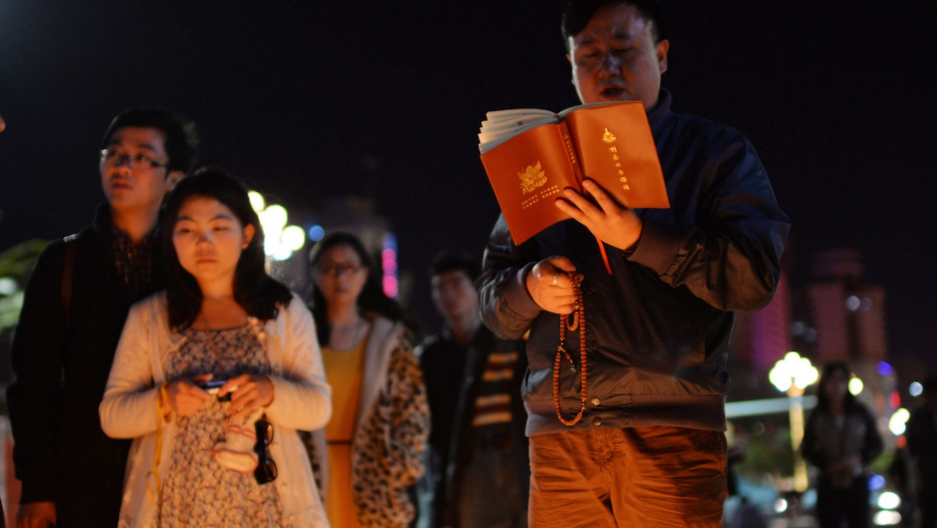 A Buddhist chants prayers on as mourners light candles at the scene of the terror attack in Kunming, southwest China's Yunnan Province.
Credit: STR
Share

HONG KONG — Prior to Saturday night, Kunming was known as the capital of a province celebrated for its tranquility and relative ethnic harmony.

That reputation is sadly shattered after Saturday’s terror attack, in which assailants wielding meat cleavers and curved swords rampaged through a train station, leaving 29 civilians dead and 140 injured. Witnesses said the smell of blood filled the air.

The attack occurred days before China’s annual parliamentary session, which opened on Monday. Separately on Monday, official news service Xinhua reported that suspects had been arrested.

In Kunming, residents remain bewildered and outraged by the violence unleashed on their city.

“People are very angry, they are very pissed off,” says Apu Sun, a researcher and translator in Kunming. “Why do Xinjiang people attack us, they say, we are innocent? Why choose Kunming? Why choose the most vulnerable people?”

That anger is also evident on social media, where many directed their rage against the Muslim Uyghur minority. Ethnic relations in China are already toxic, and the attack has generated tremendous anger toward Uyghurs — a Turkic people who live in the far western region of Xinjiang. They face discrimination and religious restrictions, and have benefited less from the territory's economic boom than Han Chinese.

Han Chinese, in turn, often complain that Uyghurs are ungrateful for the economic development and preferential policies extended to them by Beijing.

“In our cities all the thieves are cantaloupe sellers [commonly understood to be Uyghurs]. If they can’t steal they fight, and they immediately reach for a knife to intimidate ordinary people!” one user wrote on Sina Weibo, China’s Twitter. “Even if they themselves are not terrorists, Xinjiang is very disappointing. I personally loathe Xinjiang people.”

Over the last year, more than 100 people have died in clashes between Uyghurs and Chinese security forces in Xinjiang.

The Kunming massacre is the first time coordinated, large-scale Uyghur violence has spilled over into another part of China.

“An attack of this scale and a degree of organization among a group of assailants is unprecedented outside of Xinjiang,” says James Leibold, an expert on race and ethnic policies in China at Latrobe University.

The Chinese government has tried to downplay the incident, avoiding mentions of the word "Uyghur" in official reports, and stressing in editorials that no one ethnic group should be blamed.

On Sunday, three of Beijing's most influential newspapers buried the news, keeping it off the front page. Censors have worked overtime to delete Sina Weibo posts warning people to avoid anyone wearing T-shirts with Uyghur script.

The government's fear, Leibold says, is that Han Chinese citizens' rage could turn against the Party.

“The state has a problem with Uyghurs, but I don’t think the state has a fear of Uyghurs. What they do fear is angry citizens who feel the Party doesn’t protect them,” he says.

"They’re in a difficult position — there’s nothing to be gained. They have to be perceived to be doing something, standing up for law and order, seeking justice. By blaming the Uyghurs, though, it makes the government look bad, and it can create this inter-ethnic distrust and hatred."

Whatever measures the government takes to soothe worries, for Kunming residents the city will never feel the same. Sun says the streets are quiet as people urge one another to stay home.

"This will change us. In the past Yunnan [province] was a very safe place for tourists. We say we have clean air here, kind people, hospitable people, pleasant life.”

"Now people are scared. My friends around me, they call me, they say, hey don’t go out alone, don't walk at night, don’t go to a very remote place. People are very concerned, very concerned.”