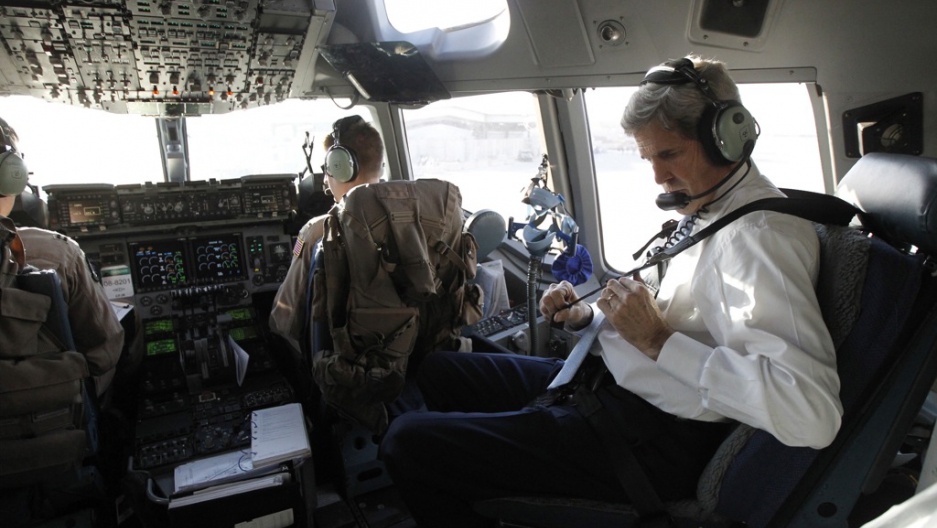 US Secretary of State John Kerry flies out of Iraq on March 24, 2013. Kerry arrived in Afghanistan the following day for talks with President Hamid Karzai.
Credit: Jason Reed
Share

Maybe US Secretary of State John Kerry has forgotten about the Iraq War.

How else could he appear on "Face the Nation" and, with a straight face, slam Russia for "invading another country on completely trumped-up pretext"? Watch. Go to 00:57 and 02:50 for the money quote, twice repeated.

As a reminder to Kerry (and anyone else): The United States invaded Iraq on March 20, 2003 because the country's leader, Saddam Hussein, almost certainly had "weapons of mass destruction." Here's the famous case for invasion then-Secretary of State Colin Powell made to the UN Security Council:

In the end, however, the US invasion of Iraq was based on a — how do you say? — "completely trumped-up pretext."

A decade later, and after hundreds of thousands died, we now know the WMDs never existed. Powell said he had been misled.

Kerry can't possibly forget the Iraq war. He voted for it. And now he's hearing from veterans like Ross Caputi, who fought in Fallujah and notes in a recent open letter to Kerry that the Iraq War "resulted in hundreds of thousands of deaths, millions displaced, permanent environmental contamination, and a new repressive regime that most Iraqis regard as being more brutal than that of Saddam Hussein."

Caputi practically begs Kerry to suspend shipments of Apache helicopters and Hellfire missiles to the Iraqi government, which is now struggling to contain an Al Qaeda threat that before the Iraq War didn't exist.

More from GlobalPost: These are the 9 weapons the US is now selling Iraq

Anyone with memory problems, including John Kerry, might consult this graphic: "Iraq: Failure in 49 steps."

For the latest on Russia's incursion into Ukraine, visit our frenetic live blog.