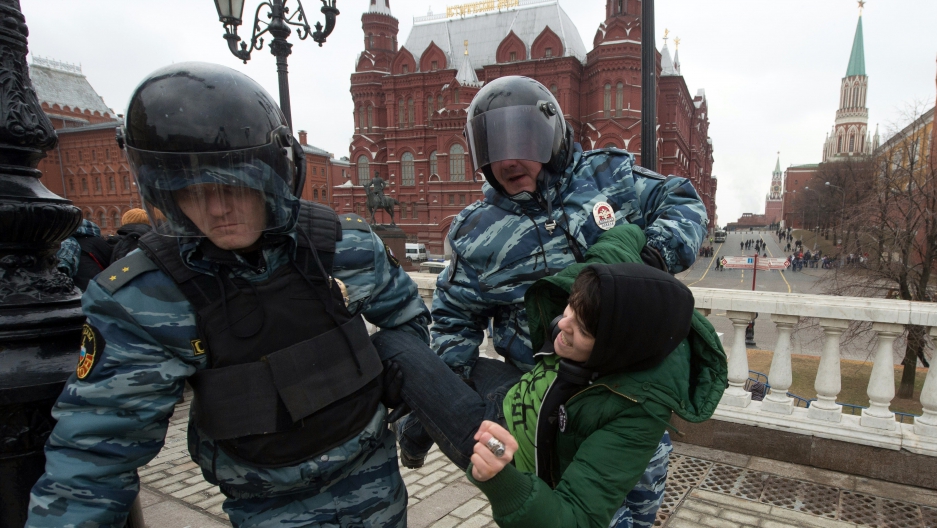 Russian police detain an anti-war protester near the Kremlin during on Sunday.
Credit: Dmirty Serebryakov
Share

That’s probably what you’d believe if you relied on Russian state television for news about Moscow’s invasion of Ukraine’s Crimean peninsula last week.

As tensions there escalate amid Kyiv’s desperate scramble to restore political order, the Kremlin’s propaganda machine is serving as an ideological vanguard for Russia’s military operations there.

The message is simple: Ukraine has been seized by an illegitimate junta, its destiny is to become a failed state and the resulting chaos threatens the country’s large number of Russian speakers.

Fed to Russia’s population — much of which gets its news primarily from state-run television — that rhetoric has helped Moscow justify the threat of war against its neighbor.

“Taken together, all of these themes clearly indicate a certain official political line,” says Aleksandr Morozov, a media analyst in Moscow.

In fact, both protesters and the new government in Kyiv represent a broad political spectrum, hail from all parts of Ukraine, have repeatedly reached out to their opponents and pose no direct threat to the country’s pro-Russian population.

Although radical nationalist groups have indeed played a key role in the months-long protests, the most prominent of them — the militant group Right Sector — wields little political influence.

The only reported attacks in recent days have been by pro-Russian protesters in the country’s east against pro-Kyiv demonstrators. Those appear to have been whipped up with Russian support in the wake of the invasion.

Instead, intimidating and well-armed troops are patrolling quiet streets and bullying their outmanned and outgunned Ukrainian counterparts into giving up without a fight.

Nevertheless, state-run television in Russia has kicked into overdrive since Ukrainian President Viktor Yanukovych’s ouster, fueling fears among Russians and Russian-speaking Ukrainians — many of whom also tune in to Russian TV — that the Kyiv authorities are out for blood.

Last Saturday, Russia’s Foreign Ministry claimed armed radicals from the capital had attempted to seize Crimea’s Interior Ministry, a claim widely disputed by locals in the Western and Ukrainian press.

A day later, the state-run Russia 24 news channel reportedly used footage from violent clashes in Kyiv before Yanukovych’s ouster to illustrate alleged street fighting between police and protesters in the Crimean capital of Simferopol on Wednesday, the day before troops began arriving.

Scuffles between opposing protesters had taken place, but the police weren’t involved and the severity was nowhere near what Kyiv had seen last month, when around 100 people were killed.

Also on Sunday, Russian state-owned Channel 1 reported that around 140,000 Ukrainians had poured over the border in the past two weeks seeking refuge from the alleged crisis next door.

But eagle-eyed bloggers quickly pointed out that the television footage accompanying the report actually showed a busy Polish-Ukrainian border crossing. A screen grab of a Russian border post through which those refugees had supposedly flocked actually showed an empty crossing.

Those details appeared lost on thousands of pro-war demonstrators who turned up in Moscow last weekend to support President Vladimir Putin’s request to send troops into Ukraine.

The demonstration — covered prominently by state television, including the English-language Russia Today network — allegedly drew between 10,000 and 25,000 people.

That rally was mirrored by far smaller anti-war protests, which went unreported and were swiftly broken up by police, resulting in around 360 detentions, according to a Russian police watchdog.

The pro-war turnout — and the cause around which protesters rallied — is largely unsurprising, given years of what analysts say has been effective use of state propaganda.

“It didn’t start yesterday or last week, but goes back as far as Russians can remember,” says sociologist Alexei Grazhdankin, deputy director of the Levada Center, an independent polling agency.

That’s reflected in fresh statistics from the Levada Center, published Monday and based on research collected shortly after Yanukovych’s outster.

According to the survey, 43 percent of Russians believe the Kyiv protests were the result of Western influence, while only 17 percent say they were prompted by discontent with Yanukovych’s corrupt regime.

Even fewer — 11 percent — think the demonstrations were aimed at ending Ukraine’s political and economic dependence on Russia.

But in case there were any doubts, a live feed of a vote from the upper house of parliament that unanimously granted Putin permission to use military action in Ukraine last weekend helped put them to rest.

One by one, stiff and uncompromising senators took to the tribune to denounce the “fascist” threat Ukraine’s new rulers posed to stability, while also condemning the Western support that allegedly enabled the violence in Kyiv.

There was even a proposal to recall Russia’s ambassador to the United States over the matter — all broadcast live on state TV.

More from GlobalPost: Threat of war in Ukraine prompts anti-war demonstrations around the world

Despite parallels to the Soviet Politburo’s collectively trumpeting the Communist Party line during the Cold War, Morozov, the media analyst and editor of the Russian Journal, says the Kremlin propaganda now on display is different.

It’s more aggressive and depicts a “clash of civilizations” between Russia and the West.

“One would hope that such an ideology is for domestic consumption and a boost in ratings, and that it won’t start dictating important political decisions,” he says.

“It would mean Russia will no longer be a partner with the Western world, but will turn into an Iran for some time.”