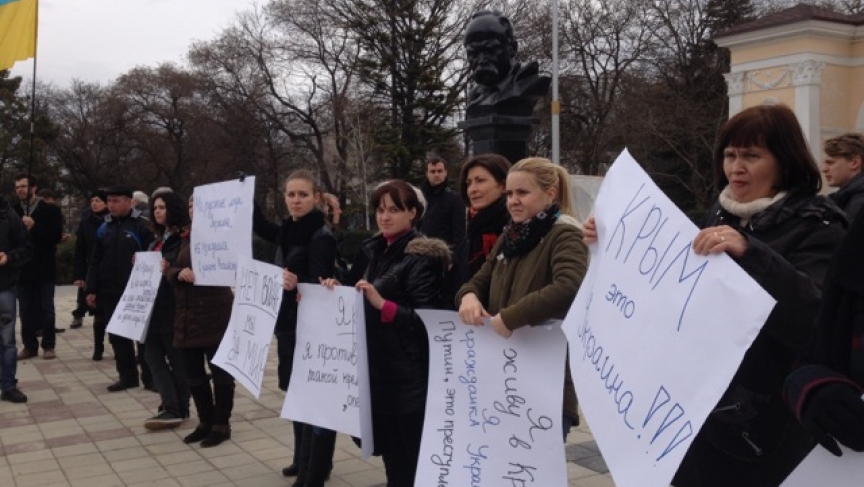 Protestors in the Crimean city of Simferopol come out in support of the new government in Kiev.

Two dozen men gather along a potholed road in a suburb outside the Crimean city of Simferopol. They are an overnight neighborhood patrol.

Russian troops are now controlling the Crimean peninsula, and one man here, named Timur, fears the worst. He says their presence has inflamed tensions, but he is even more worried about rumors of other “visitors” from Russia.

“There are all sorts of people around who are trying to cause trouble,” Timur says. “They are Cossacks and others who have been sent from Russia.”

In the past, Cossack mercenaries have often followed the regular army and they have a reputation for stirring trouble among neighbors. Timur says Crimeans must unite to make sure it doesn’t happen here.

“We are patrolling together, Ukrainian, Russian and Tatars, trying to keep our neighborhoods safe because we all expect trouble,” he says.

The Russian presence has already upset Crimea’s delicate ethnic balance. Timur is a Tatar. His Muslim community is indigenous to Crimea and has a long history of bad blood with Russia. Then there are Ukrainians, most of whom support the revolution that ousted the pro-Russian government in Kiev. But ethnic Russians make up 60 percent of the population — and the Kremlin says it has sent troops into Crimea to protect them.

Masked men armed with Kalashnikovs and anti-tank weapons now control every administrative building in Simferopol. Every day, their supporters gather to cheer them under the Lenin statue in the city’s main square. “The presence of these Russian troops means that we are not alone,” says an elderly woman named Valentina. “What happened in Kiev showed the true face of Ukrainians. They are fascists. Here in Crimea, we want peace. We can live peacefully with Tatars, they are the nice neighbors.”

But a man next to us starts to argue. “No,” he says. “They are murderers; the Tatars want to kill us. We need to be protected from them.”

Others join the argument. It's still going on when I leave.

Across the city, there is another, much smaller demonstration. This one is in support of Ukraine. I walk up to a young woman holding a sign addressed to Vladimir Putin. It says, “I am Russian and I don’t need your protection.” She says the presence of the Russian troops is extremely dangerous.

“It’s designed to get us fighting each other. It’s becoming so tense,” she says, starting to cry. “They are turning us against each other.”

When she becomes too upset to talk, her friend Victoria jumps in.

“We are scared here because foreign troops are in the center of our city. I can hear all the time people screaming 'Russia, Russia,'” Victoria says. “I cannot go outside and speak Ukrainian. I saw people being beaten up for speaking Ukrainian. We don’t want Russia to protect us.”

Just outside Simferopol, Russian troops have taken over another military base. There is a line of armored vehicles and men, hundreds of them, all along the perimeter. The men are heavily armed but their uniforms are not marked.

When I ask who they are and where they are from, one of the men, in a balaclava, puts a finger up to his mouth. They don’t speak, but Russian supporters are waving flags and cheering them on.

Farther up the road, Ukrainian soldiers stand behind the gates of their base. It’s a stand-off. At the entrance to the base there is a church, where a visibly nervous man is reading the Old Testament.

“Some of us pray to their God on the Red Square [in Moscow]; others to the real one,” the man says in Ukrainian.

Inside the church, I find a group of women who are also shaken by the arrival of the Russian troops.

“We were finishing a service and suddenly all hell broke loose,” one woman says. “We are going to stay here until they go. I was born in St. Petersburg, I am 100 percent Russian, but I am ashamed for Russia. I am ashamed that this is happening.”

As the stand-off continues, the women — one Ukrainian and two Russians— form a semi-circle and sing a Ukrainian song.

Such unity is what Crimea and Ukraine need the most now. But the battle between bigger players, in Russia and in the West, is already turning neighbors against each other.