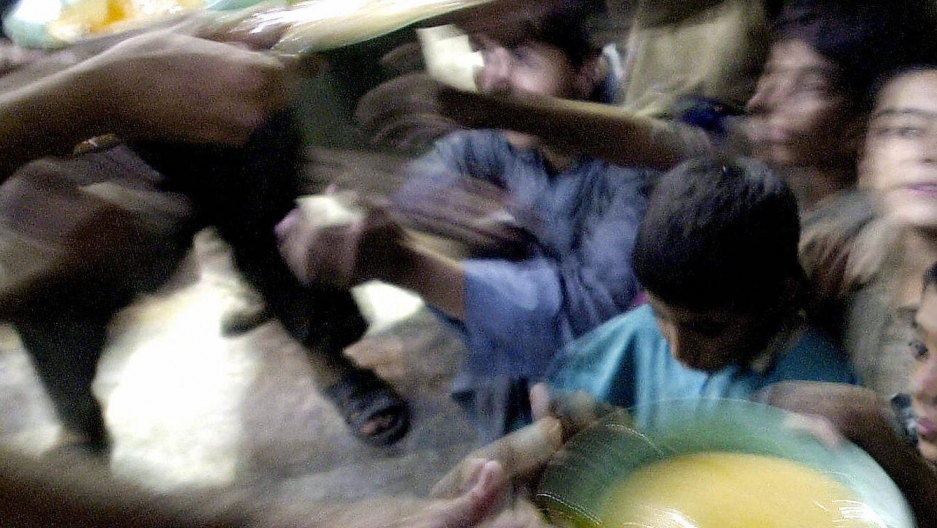 Pakistani street children receive food offered by a local businessman in a street in Karachi in 2003.
Credit: Aamir Qureshi
Share

KARACHI, Pakistan — “I know how the street works,” boasts Umar.

Umar is 14 years old, but he’s been on the streets since he was 10. His father remarried four years ago and Umar’s new stepmother pushed him and his brother, Abdal, then 8, out of the house.

Lost in a city of more than 20 million, about 200,000 children live on the streets of Karachi — an invisible population. And now some of them are starting to work as spies and couriers for terrorist groups.

Karachi has long been a notoriously violent megacity where criminal gangs, political parties and Islamic extremists all jostle for control. But over the last few years the political, religious and ethnic tensions that define daily life have intensified. Taliban violence and the floods of 2010 and 2011 pushed waves of migrants to Karachi, challenging the Urdu-speaking Muhajirs’ longtime supremacy in the city’s government and on its streets.

The city didn’t prove to be the city of dreams many newcomers had hoped for. Many of their children were forced to live and work on the streets. Others were lured there by peer pressure and drug abuse, or pushed by domestic abuse, says Ali Bilgrami, a program director at the Azad Foundation, a local NGO that works with street children in Karachi.

The children are easy targets for both criminal gangs and the Taliban militants who began arriving in the city in late 2010, initially for rest and medical help. Since 2010 the Taliban has become more entrenched in the ethnic Pashtun parts of Karachi, competing with local criminal groups and politically sponsored mafias by using the city to raise funds through extortion and kidnapping. Both the Taliban and the local gangs now recruit messengers from the large population of street children the migration has created.

I met Umar, his brother Abdal, and another street kid, Sajjad — the names of all three have been changed as a precautionary measure, although none of them have traceable documentation — at the Azad Foundation’s offices in a residential area in central Karachi. On the walls of the basic office space are hand-drawn posters instructing people how to work with children. The fact that someone deemed them necessary is not reassuring. “Do not try to have sex with a child. It is a serious offence,” reads one recommendation. “Street children should treated with respect and dignity (sic),” reads another.

The world that these boys inhabit is brutally harsh. Sajjad says he often gets into fights, but he only fights back when he thinks he can win. When he is challenged by someone bigger than him, he says with a hint of pride, he cuts himself, and watches them run away at the sight of blood. He produces a rusty razor blade from his pocket to show me, and pulls up his sleves to show me his arms. They are covered in scars. He has only three fingers on one hand, but doesn’t say how he lost the other two.

Abdal’s arms are also crossed with cuts. He wears a five-rupee coin in his ear. He says it looks cool.

All the boys live in Saddar Town, the heaving commercial centre of Karachi where business owners have reported a rise in recent months in extortion demands from Taliban-linked and politically backed groups. In Saddar Town, Karachi’s booming informal economy jostles for space along side the newly built offices of Pakistan’s emerging business elite.

Traffic crawls through streets crammed with cars, motorbikes and hawkers selling everything from auto parts to fresh fruit. Old colonial buildings have now been overshadowed by high-rise office blocks, home to some of Pakistan’s largest companies. Five-star hotels have sprung up just around the corner from markets selling second-hand clothes to Karachi’s poorest.

Umar works and sleeps outside a bank near a restaurant that often gives out leftovers to the street children, he says. Abdal works with a garbage collector, pushing a wheelbarrow around the streets collecting rubbish from local businesses. Sajjad is less specific about his work.

“The kids have to be affiliated with gangs for protection,” explains Yusuf Shah, a social mobilizer with the Azad Foundation, who has been working on the streets with the children for four years. Traditional street-children gangs are just made up of street kids, headed by an adult who also grew up on the streets, says Shah. The scrapes they get into arise mostly from turf wars, and drugs are mostly for personal use. But now, says Shah, these street-kid gangs are being infiltrated and used by larger criminal gangs and extremist groups.

The street children are an invisible population in the hundreds of thousands — ignored by the local administration, a pest to local residents, abused by the police — and that is precisely what makes them useful. They can carry weapons and bhatta (extortion) threats around the city. “They are giving weapons to the kids to take places for target killings,” says Bilal Ahmed, a consultant overseeing research into the links between street kids and crime in Karachi. Target killings are an almost daily occurrence in Karachi, and used by sectarian groups to kill members of minority groups, keeping the entire community in a state of fear.

Street kids are also being used to carry messages between members of terrorist groups, who fear phone-tapping by intelligence agencies and the police, says Ahmed.

“They use any tactics to gain access to the children,” says Ahmed, But generally extremists recruit the children through a promise of money and drugs rather than through Islamic ideology, he says. “They will not recite Quranic verses,” says Ahmed. “There are very few cases where they have a religious mindset.” Only a few older boys that he’s spoken to offered a religious justification for their acts.

More broadly, gangs and extremist groups seeking recruits profit from the fact that these kids are young and alone. “It’s the safety factor. The children feel secure with adults and adults have a certain power over the kids. The gang leaders, the community leaders, the criminals, they have more power and the kids are drawn to them because they feel more secure,” Ahmed says.

Bilgrami believes there are a further 600,000 youths in Karachi who are at risk of becoming street children, and warns that while the use of street children by extremist groups and large criminal syndicates is in its infancy, he expects it to grow. “No one is looking at them [street kids] as a potentially pivotal link in crime and extremist linked violence,” Bilgrami says, which he thinks is a mistake: “It will only grow because there is no strategy [to address it] within the government of Sindh [the provincial government].”

A twin suicide attack on a shrine in Karachi in 2010 may have been the work of street children recruited to be suicide bombers, said a police source who declined to be named. The attack was claimed by the Pakistani Taliban but a Sunni sectarian group, Lashkar-e-Jhangvi, is more likely to have orchestrated the attack, the police source said. The case remains unsolved, like most in Pakistan, where the investigation capabilities of the police are woefully poor.

Bilgrami says he heard unconfirmed reports at the end of last year that street kids from Karachi are being taken to Quetta, the violent capital of Balochistan province 400 miles from Karachi, to be used as suicide bombers by extremists groups.

The boys I met just talk about getting money and drugs. “I know all the police and everyone who sells [drugs],” says Abdal. He explains his daily routine, which revolves around selling bits of wire and metal to a trash collector, in order to buy hash — known as charas in Pakistan — and solvents. Later he produces a piece of paper carefully wrapped around a small hunk of charas, as if to prove his point.

I ask Abdal and his friends whether they have been approached by gang leaders or other people and asked to do things for money. They shrug but acknowledge they have. They are vague about what it is they get asked to do. Abdal mumbles something about carrying packages for police and other adults. Sajjad, who is about 17 but doesn’t know his exact age, gets a bit philosophical. “It's all fate. Sometimes I win, sometimes I lose,” he says wistfully.

Shah says that some of the older boys Sajjad’s age wind up becoming recruiters for the gangs. Recruiters find children who have newly arrived on the streets and lure them to the gang headquarters. They are then kept there for a few days, given drugs and often sexually abused, says Shah. This is initiation into Karachi’s murky underbelly.

“Then the child doesn’t want to go home,” he says, adding, “It’s easy to brainwash a child.”