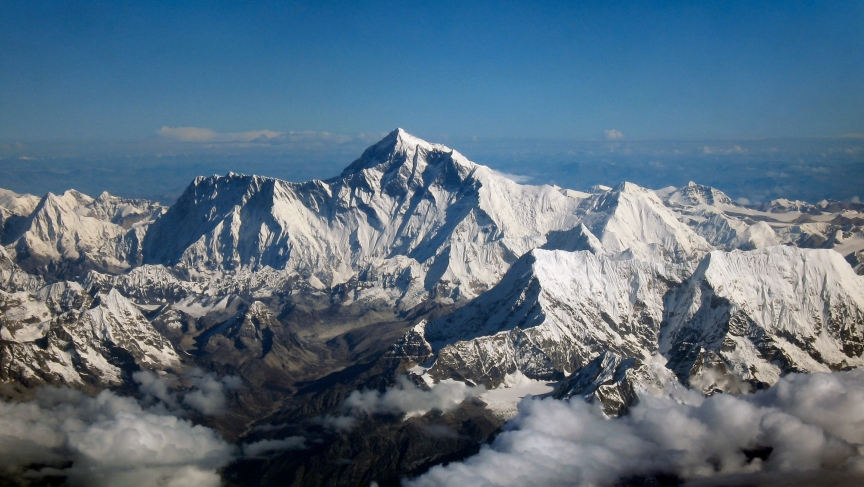 Climbers who want to summit Mount Everest, pictured from the south, looking north, will now have to help clean up the mountain, too.

The government of Nepal is taking action against the impact of tourism on Mount Everest — the tallest, and probably most famous, mountain in the world.

Starting in April, climbers ascending beyond base camp will be required to bring back eight kilograms (more than 17 pounds) of garbage — or officials may fine them. This rubbish doesn't include each climber's own personal garbage generated during the course of their climb, according to the Guardian newspaper.

Years of expeditions have left the mountain littered with refuse, such as abandoned oxygen cyclinders and human waste. There are already measures in place to try and curb the environmental toll, such as a refundable $4,000 deposit that is returned when climbers prove they have carried out all of the trash they brought in — but enforcement is proving difficult.

Despite being a bestseller 160 years ago, Solomon Northrup’s memoir "12 Years A Slave" was largely forgotten until the British film director Steve McQueen turned it into an Oscar-winning film. It tells the story of a free black man and talented violinist who lived in Saratoga Springs, New York with his family in the mid-1800s. He was drugged, kidnapped and sold into slavery in the South for 12 years before finally managing to escape.

Until recently, the only people who remembered his story were his direct descendents — such as Adam Clayton, the great-great-great-grandson of Solomon. He spoke to The Takeaway about reading his ancestor’s memoir as a teenager, the impact of seeing the film and knowing that Solomon’s story has regained its place in American history.

Better get that banana before it's too late

In the 1990s, scientists discovered a fungus spreading through the banana crops of southeast Asia. The Tropical Race 4 strain of Panama disease turns a banana's flesh into a rotting, fibrous mass. And it’s still spreading. Last year, banana farmers in Jordan and Mozambique discovered their crops had been affected, according to Quartz magazine.

Now, it’s heading toward Latin America — home to at least 70 percent of the world’s $8.9 billion per year banana exports. Randy Ploetz, the professor of plant pathology at the University of Florida who discovered Tropical Race 4, believes the long-term outlook is grim. In the worst-case scenario, he says the fungus could wipe out 80 of the 145 million tons of bananas and plantains produced each year.

Bitcoin gets a little bit of good news

Seven Native American Sioux tribes in the US have adopted a cryptocurrency derived from Bitcoin as their official legal tender. Called MazaCoin, the tribes hope it will help them escape poverty if it proves a success. The Oglala Lakota Nation are leading the effort, according to the Independent. The project is the brainchild of Payu Harris, a member of the tribe and a Bitcoin developer.

One key difference between MazaCoin and Bitcoin is that there is no limit on the number of MazaCoins that can be created. Bitcoin has a ceiling of 21 million coins, so the currency is inflationary. So far, 25 million MazaCoins have been set aside as a national reserve for the Lakota Nation, while another 25 million coins have been reserved for a Tribal Trust, which will give grants to local businesses and tribe members.

How does a snake eat a crocodile? Head first

One of the most visited stories on the BBC news website has been a clash of two titans, between an Australian crocodile and an enormous snake. It happened on Sunday at Lake Moondurra, in Queensland. Local residents filmed the struggle, which reportedly lasted for five hours. Ultimately, the snake, thought to be a 10-foot python, overwhelmed its opponent by squeezing it. Once the crocodile had died, the snake slowly began to swallow it, head first. You can see photographs of the encounter, taken by Tiffany Corlis, a local author, on the BBC website.

Athletes competing in the Paralympic games in Sochi have unseasonably warm weather awaiting them. High temperatures are expected to be in the low to mid-60s, according to AccuWeather. The games run from this weekend through March 16.