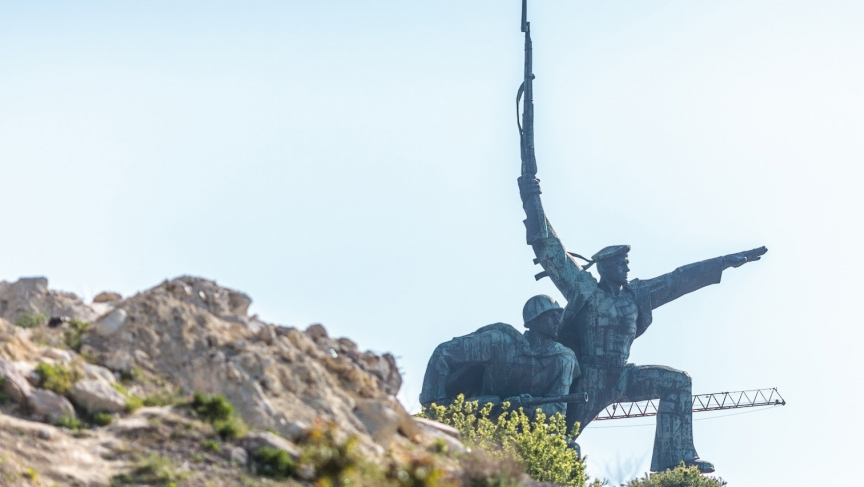 A monument in Sevastopol to the city's heroic defense against the Nazis in World War II.

Let's be clear — we don't know what Moscow is thinking for Ukraine.

On the one hand, Russia's leaders might see the Ukrainian Revolution as an existential threat. It's a revolution against tyranny and corruption, and the Kremlin does not want to see that spreading. And if that's the case, the worst nightmare scenarios of Russian intervention become plausible.

But Russia's likely thinking on the Crimean peninsula is a lot more transparent, and it's an old-school lesson in geography and history.

Let's start with geography. Crimea offers Russia something it sorely lacks — access to the sea. For much of its history, Russia was a landlocked state.

Being landlocked limited its access to world markets and left its rulers feeling isolated and marginalized — a second-rate power on the periphery of the civilized world. Crimea offered Russia an ice-free port, not so much for shipping, but as a base for its naval power.

Sevastopol makes a great naval base. It has a large, deep, defensible harbor and it's located almost in the middle of the Black Sea, offering an easy jumping-off point to project power in all directions in all seasons.

Sevastopol was founded as a naval base in 1783 — the same year as the American Revolution came to an end. For Europe, that's pretty late in history. That's because, for the preceding centuries, Crimea was home to a powerful Islamic state which dominated what is now southern Ukraine and southern Russia.

Russia's conquest of the Crimean Tatars was, and still is, hugely symbolic for Russians. It symbolized Russia's coming out as a great power and the beginning of its emergence as a naval power, a player on the world stage. The region was colonized by Russians and Ukrainians. Most of the Tatars were driven out — although some remain and are today protesting against the Russian takeover.

Russia's emergence as a power in southeast Europe 200 years ago threatened to destabilize the balance of power. Other great powers, like France and Britain, worried that if Russia took over Turkey, there would be no stopping Russia from projecting power into their backyards.

In the 1850s, it seemed the Russians might finally defeat the Ottoman Turks and obtain an outlet to the Mediterranean. So Britain and France intervened directly, leading to the so-called Crimean War.

The allies besieged the great Russian naval base at Sevastopol in Crimea. The Russians mounted a prolonged and heroic defense, but were finally beaten. This defeat was a national humiliation for Russia. The message was that Russia was poor and backward compared to the rising technological powers of the West. So Moscow launched a campaign of reform and transformation.

In 1941, the Nazis invaded the Soviet Union. The Soviets suffered defeat after defeat.

In the fall, the Germans assault Crimea. But then they get stuck. Sevastopol holds out, in part because it can be resupplied by sea. The city holds out for nine months. And through all that time, the eyes of all Russia are on this rare example of relative success — a symbol of Russian stubbornness against the fascist invaders. Sevastopol was awarded the status of "Hero City" at the end of the war.

Then, with a stroke of a pen, Crimea was transferred from Russia to its satellite Ukraine in 1954. A decree stated the move was motivated by "the commonality of the economy, the proximity, and close economic and cultural relations between the Crimean region and the Ukrainian SSR [Soviet Socialist Republic]."

Some said Khruschev also wanted to reward Ukraine for its heroism during World War II. Under the Soviet Union, the transfer was a pretty meaningless technicality. But when the Soviet Union collapsed in 1991, Ukraine and Russia almost came to blows over Crimea.

There was a compromise: Crimea remained part of Ukraine, but with an autonomous government. And most important for Moscow, Russia kept the Black Sea Fleet pretty much intact and was allowed to lease the base at Sevastopol.

Given the historic symbolism of Crimea, it's unlikely Russia will tamely leave now. The defensive lines being dug by Russian troops along the Perekop Isthmus between Crimea and the Ukrainian mainland are in the same locations as the trenches dug in 1941 against the Nazis. And the Russian media today is filled with references to the "fascist coup" that has seized control in Kiev.

On top of that, geography remains the same: Sevastopol remains the key naval base needed for Russia to maintain its vision of itself as a great power. Some of us in the 21st century don't like to think that "hard power," such as a huge navy, still matters that much. But if you ask me, it always has and always will.

Russian leaders appear to have convinced themselves that they cannot give up Crimea without forfeiting Russia's status as a great power.

So what likely happens next? Well, Crimea is physically detached from modern Russia. It's separated by those parts of eastern and southern Ukraine that contain large Russian populations to this day. If you were the Kremlin, what would you do?