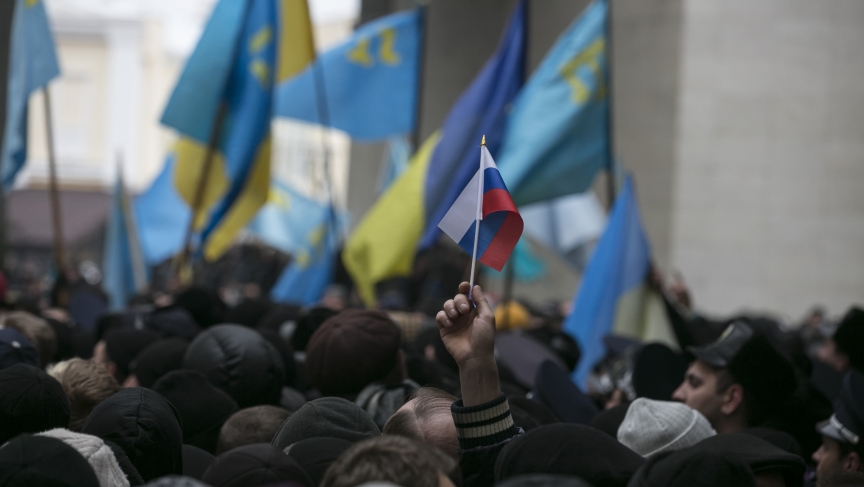 An ethnic Russian Ukrainian holds a Russian flag as Crimean Tatars rally near the Crimean parliament building in Simferopol February 26, 2014.

There’s a tendency to oversimplify the situation in Ukraine. Hearing the news, one might think the country is divided east and west with a Ukrainian side versus a Russian one.

The reality is much more complex.

So says Alina Simone. She is a Russian-speaking, Ukrainian-born, Jewish-American writer who lives in Brooklyn, New York. And she is like many in Ukraine, who come from a variety of backgrounds and cultures.

She says that identity in Ukraine, and other countries that were part of the former Soviet Union, almost comes down to genetics. "It almost requires a blood test,” she says. “Your passport defined your identity as Jewish, Russian, Ukrainian, or Tatar.”

Due to her heritage, Simone’s parents were able to pick between Jewish or Russian for their daughter’s identity. They chose Russian. And they did it for practical purposes.

She’s from the town of Kharkov, where Russian was the main language in schools — pushed by the then-Soviet government. But while her parents chose her identity for her passport, they didn’t force the Russian identity on her during her childhood.

That makes it hard for her to answer the question: "Are you Ukrainian or Russian?"

“It’s very complicated,” she says. “But I do consider myself Russian because this was the language I grew up speaking and half of my family is from St. Petersburg.”

Yet after the Orange Revolution in 2004-05, her father began to rethink his position. He started encouraging Simone to own her Ukrainian identity. He told her that, by western standards, she is Ukrainian, as her family has lived in the area for generations. He told her she should be comfortable calling herself Ukrainian.

Simone's situation is common in Ukraine. She says it’s a country full of mixed ethnicities — something you don't see in the simple maps that appear on websites and screens, from the New York Times to CNN.

“I think it’s really important to remember that location does not automatically equal loyalty. Nor does language." She says that just because you are a Russian speaker, that does not mean you support a Russian annexation of Ukraine.

She says there are plenty of pro-Maidan protesters, those who occupied Kiev's Independence Square, who only speak Russian. On the flip side, her father just spoke with an ethnic Ukrainian friend who supports Russia.

So, as you hear stories in the coming days about Ukraine, she says you should keep in mind the situation is complex, and that identity isn't as simple as what appears on a passport.