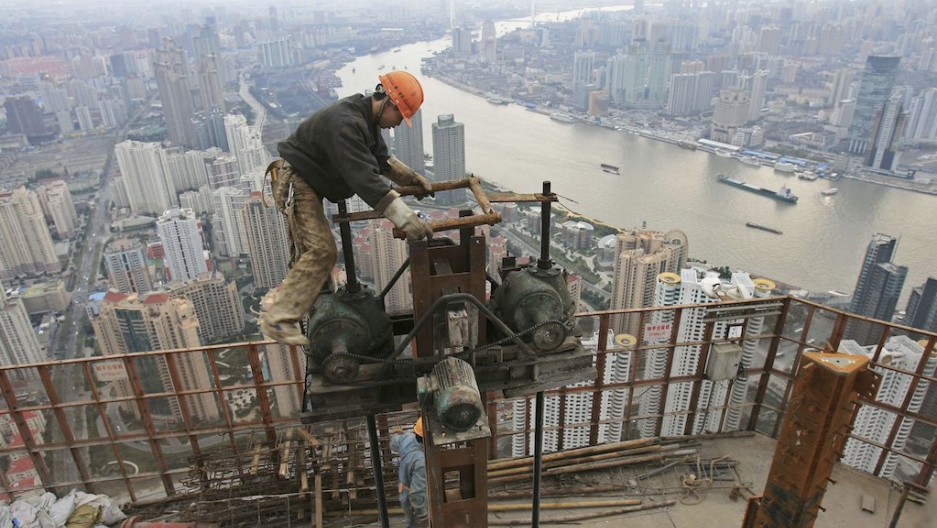 A man works on the construction site of the Shanghai World Financial Center in 2006. China's quest for natural resources is enormous, but not as big as many claim.
Credit: China Photos
Share

HONG KONG — China's coming for your water. Your food. Your oil. Your iron ore.

The country has a “voracious appetite.”

At least that's the drumbeat you've been hearing in headlines over the last several years.

True, China has launched an impressive series of projects to secure mines, farmland, and water resources, from Brazil to Zimbabwe to Papua New Guinea.

Given all that it’s easy to think that China may be single-handedly driving the world into a desperate, dangerous contest for Earth’s dwindling resources.

The reality, however, is more complicated.

Elizabeth Economy of the Council on Foreign Relations helps cut through the hype in her new, co-authored book, "By All Means Necessary: How China’s Resource Quest Is Changing the World."

She spoke with GlobalPost about the risks and realities of China’s strategy for securing raw materials. This interview has been condensed and edited for clarity.

GlobalPost: Your book talks about the significance of China’s push into the outside world. What are the main effects, from an economic point of view?

Elizabeth Economy: The consequences are across the board, whether you’re talking about global economics, global governance or international security. I think on the economic front, China’s quest for resources has certainly contributed to rejuvenating some economies, particularly resource-rich economies. And, it has certainly contributed to price rises in the case of some commodities.

What were the biggest surprises of your research?

One of the most interesting things we found was China’s impact on the iron ore market. You’d tend to think that China’s going to come in and just drive up prices. But in fact iron ore prices had traditionally been negotiated in a very structured way between large consumers and large producers. When China came in, thousands of producers came too, and this made the market more flexible, instead of rigid. That was one surprise.

Another surprise was that Beijing is not really the puppet master controlling trade and deals in the way we think it does. [China’s National Development and Reform Commission] will go out and put together a package for a country, but it doesn’t mean the Chinese companies want to participate. In Brazil, for example, only about 30 percent of the promised investment in 2007 has been realized. It’s especially these big promised investments that don’t come to fruition.

I think we’re beginning to see that Chinese companies, particularly the private firms, realize that the projects China proposes are not necessarily money-making. About 67 percent of all [China's] foreign direct investment is money-losing.

In what aspects is China’s quest causing real friction?

One issue is the extent to which China at home is really China abroad. At home, Chinese companies do not typically do environmental impact assessments. When they go abroad they act the same way. When I was in Brazil, [Chinese investors] would assume that the Brazilian officials could simply appropriate land from the public.

They’re also learning what the US learned in the ‘60s and ‘70s, which is when you get into bed with ugly leaders, and then those leaders fall out of power, the people in those countries remember you as tied to those leaders. In Zambia, certainly in Myanmar, there’s a lot of mistrust because they see the Chinese as having done a lot of deals with an authoritarian, dictatorial government.

I think China is beginning to understand it needs to take stock of what people believe. China investment usually operates only at the top level, and they thought they didn’t need to consult with local communities.

There’s no doubt that there’s been a backlash in a number of countries against Chinese resource investment. On land issues there have been protests in Kazakhstan and the Philippines. Brazil and Argentina passed land laws that they said were not developed directly in opposition to China, but appeared just when China was going out in full force.

What sort of new pressures does this put on China’s government? In other words, what sort of challenges does this global push for resources create for China?

You also see in Africa small scale Chinese farmers who go in to support the Chinese communities that grow up. So you have almost self-sufficient communities, and this has bred a lot of resentment — not only because of the sense that the Chinese keep to themselves, but when the Chinese come in and announce these big investment deals, there’s a fear that these jobs will be taken by Chinese workers.

There’s a very strong feeling — I’ve heard this from Chinese diplomats — that other people don’t work as hard as the Chinese. They say, “In Africa they all want to sing and dance and don’t want to work on weekends.” That’s an area of strong conflict.

This is an area where I think they need to be more sensitive to local concerns. But I don’t see any sign that they are changing.

How does China’s global push compare to what other emerging economies have done?

When you look back to the 1970s and ’80s, all major powers went out and sought resources. In the 1970s, Japan commanded 10 percent of global oil output, and China today commands 11 to 12 percent. We don’t want to demonize China in this regard, because in some ways it’s following the trajectory of all developing powers.

What challenges does this create for the United States?

In terms of what it suggests for the US, on the sheer demand side, it suggests a need for new technologies. For example, one of the things China’s rare earth embargo [against Japan] triggered in 2010 was the need to develop alternative sources of rare earth metals. Ideas of conservation and recycling, these are processes that can be triggered by Chinese demand.

On the global security front, given what’s going on now with the South China Sea and East China Sea, it’s important to disentangle resources from security. I think, yes, resource security plays into China’s strategic drive, but China’s security policy is really driven by a different consideration: China’s desire to assert its power, and the sense that China is not simply a regional power but a global power.

What is the biggest misperception about China’s resource quest?

I’d say it’s that China is the Cookie Monster of global resources, gobbling up everything everywhere it looks. The reality is, if you look at the biggest overseas agricultural investment, Canada is first, the US is second, and China is third.

China is responsible for a substantial portion of foreign direct investment, but I think there’s this sense that they are sucking up all the resources, and are a massive investor across all continents. In fact, they are nowhere near the biggest overseas investor. They are the fourth largest overseas investor in Africa, the third largest in South America, third in Southeast Asia, and so on.

It’s part of the hype that has surrounded China’s resource quest. There are issues to be concerned about but we need to have everything in perspective.