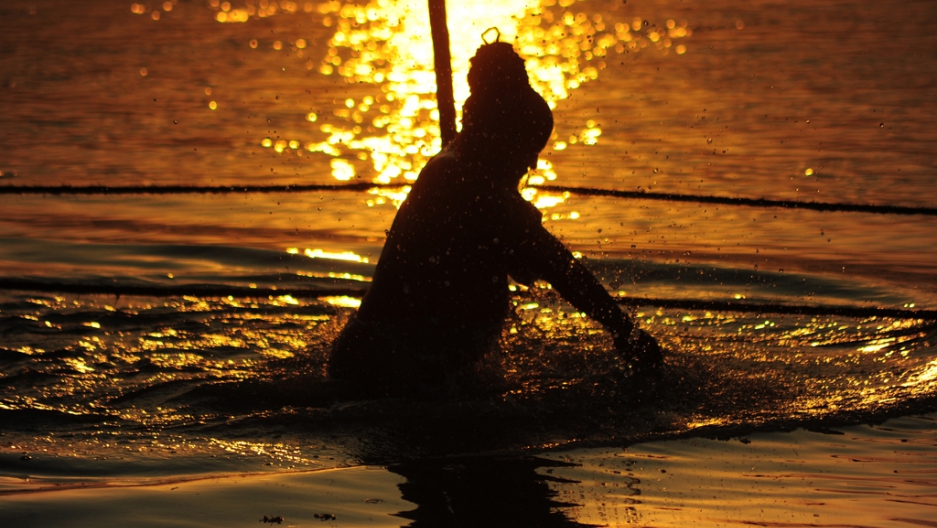 An Indian Naga Sadhu takes a holy dip at Sangam on the auspicious occasion of Basant Panchami during the annual traditional fair Magh Mela in Allahabad on February 4, 2014.
Credit: AFP
Share

Female "sadhus," or holy Hindu women, have broken away from tradition and formed a new all-female group in India that they hope will end male domination of spiritual practices.

In the northern city of Allahabad a group of women sadhus formally established their group or "akhada," holding ceremonies on the banks of the River Ganges which is considered sacred by Hindus.

Mahant Trikal Bhavanta, a leading woman sadhu, told AFP late Friday that the all-women akhada was believed to be the first in the history of Hinduism in India.

An akhada is a group of sadhus — reclusive ascetics or wandering monks who renounce normal life and are often widely respected for their holiness. India has more than a dozen such groups, all male-dominated.

According to some Hindu lore, it is believed the first akhada was formed by Hindu philosopher Adi Shankaracharya in the eighth century with the aim of safeguarding the religion's interests.

Bhavanta said the all-women group was facing criticism from male sadhus, who claim the move goes against age-old customs.

"Nowhere in the Hindu scriptures is it mentioned that women cannot have an akhada of their own," she told AFP.

"We are facing criticism from men because the move ensures that from now on, sanyasins (women sadhus) will also stand to rise in the seers' hierarchy, and the subjugation of women in the akhada system run by men will end," Bhavanta added.

Those who become women sadhus and renounce possessions in a quest for enlightenment are often widows.

Every 12 years, the Kumbh Mela religious festival is held in Allahabad, drawing legions of wandering holy men and women. Smaller, similar events are held every three years in other locations around India.

The event has its origins in Hindu mythology, which describes how a few drops of the nectar of immortality fell on the four places that host the festival – Allahabad, Nasik, Ujjain and Haridwar.

Bhavanta said her akhada would participate with its own flag in the Maha Kumbh to be held in Nasik next year.