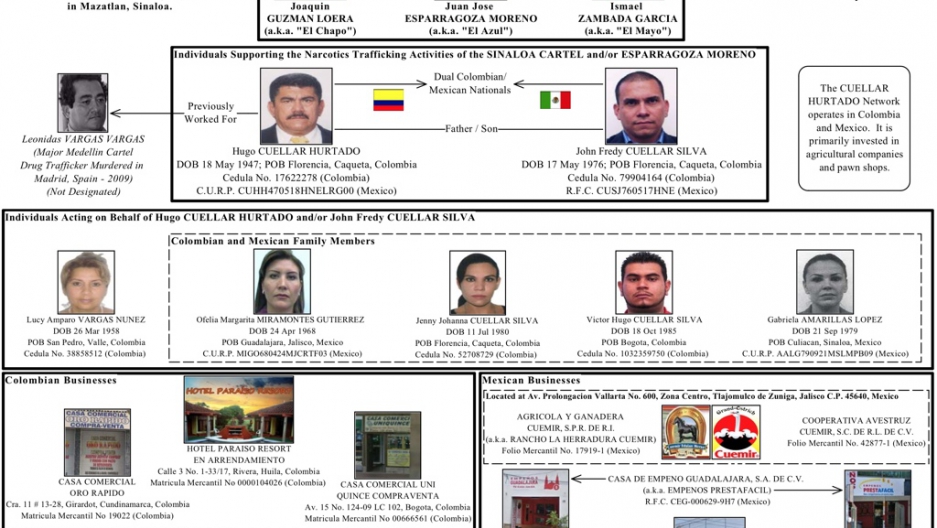 “We’re going after everything,” Peña Nieto told journalist Leon Krause in an interview for Fusion, the US English-language TV network aimed at Latinos. “Private sector agents, public agents here and in the United States and anywhere else in the world. I think he will offer a lot to talk about and to act on in the coming months,” he said.

If the Mexican president follows through on his vow, his agents might work from a detailed roadmap provided by the US Treasury Department’s Office of Foreign Asset Control, or OFAC.

The agency has been targeting the financial empire of Guzman and other Sinaloa traffickers for more than seven years. OFAC in recent years designated the kingpin’s two ex-wives and a number of their children as criminals.

Esparragoza, 65, is considered the lesser of a cartel triumvirate comprised of Guzman, Ismael “El Mayo” Zambada and himself.

El Azul was indicted 11 years ago in a Texas federal court. Like his Sinaloa Cartel partners, the US government has a $5-million bounty on El Azul's head and the Mexicans another $2.5 million.

A half dozen other people, including two sons and his wife, as well as 10 companies in Mexico and Colombia have been blacklisted along with Cuellar. The OFAC freezes US assets of those listed and prohibits American individuals and firms from doing business with them.

“Mexican authorities achieved a major victory with the capture of Chapo Guzman,” Szubin said in a statement. “Building on this success, OFAC will continue targeting the finances and operations of the Sinaloa Cartel and its other leaders, including Esparragoza.”

OFAC alleges that Cuellar, 66, smuggled cocaine to the United States before relocating to Mexico and becoming a direct supplier to the Sinaloa Cartel in the late 1990s. His businesses in Mexico include horse and ostrich breeding farms outside of Guadalajara and pawn shops around that western Mexico city.

More from GlobalPost: How Mexico's west was won: It took a village, and plenty of AKs