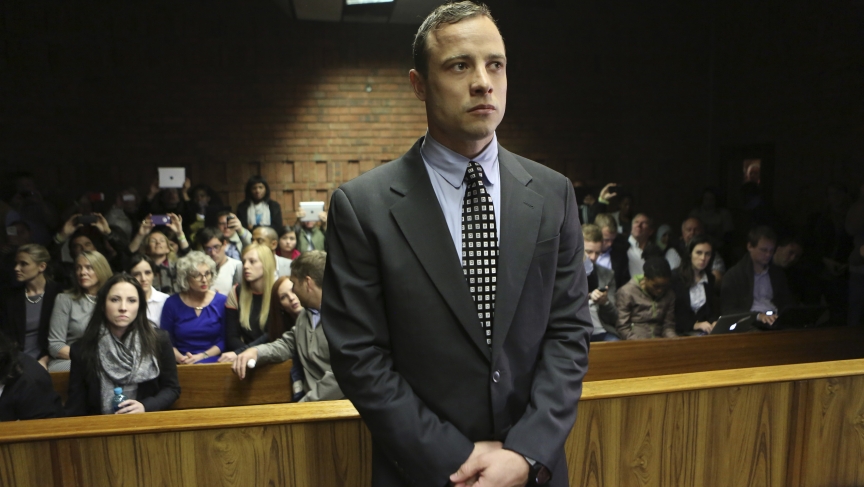 Oscar Pistorius enters the dock before court proceedings at the Pretoria Magistrates court in 2013.

Next week, Oscar Pistorius – the Paralympic sprinter who became the first amputee to compete in track at the Olympics – goes on trial for murder in his native South Africa.

The coming courtroom drama is already being compared to the American trial of O.J. Simpson. Like Simpson, Pistorius is an acclaimed sportsman and celebrity who regularly graced tabloid covers even before the tragic shooting.

His trial will be broadcast on live television in South Africa – including on a new 24-hour channel launched exclusively to cover the event.

Certain facts of the case are undisputed. On Valentine’s Day last year, Pistorius shot and killed his girlfriend, the model Reeva Steenkamp, inside his home in Pretoria. He fired four bullets through a closed bathroom door, hitting Steenkamp in the head, hip, and shoulder.

What is not clear is why Pistorius shot her. He claims he awoke in the night, heard noise in the bathroom, and – mistaking Steenkamp for an intruder – fired through the door.

Prosecutors say Pistorius shot her intentionally after an argument inside his heavily fortified home.

Now, with the trial about to begin, South Africans are trying to figure out what to make of their hero’s tragic story – and what it says about South Africa.

To some, the tale speaks to the problem of domestic violence.

“Men [in South Africa] feel they have the right to deal with women in a violent way,” says Tanya Charles, a spokesperson for Sonke Gender Justice, an organization that aims to reduce gender-based violence.

“This is not an unusual story, this is how men are behaving [in our country],” she says. According to her organization, South Africa has the world’s highest rates of gender-based and sexual violence.

Charles says it is important not to judge Pistorius before the trial begins. But even if he is found not guilty, his story will still reflect a culture where men pull the trigger far too quickly, she says.

“We have a man who allegedly wakes up to the sound of disturbance, and the only way [he] can deal with an intruder is to shoot them immediately, without finding alternative ways of resolving conflict,” Charles says. She believes South African men are raised to think they must protect their homes using any means necessary.

Other observers say the Pistorius case reflects another of South Africa’s social problems. “It speaks to the fear that the middle class have around crime,” says Nomfundo Mogapi, a psychologist and program manager at the Center for the Study of Violence and Reconciliation in Johannesburg.

Mogapi says Pistorius may well have believed that there was an intruder in his home because break-ins are common in South Africa. But she says crime statistics are misleading, because the vast majority of victims live in poor neighborhoods.

Mogapi says well-to-do South Africans often overestimate the risk of a break-in at their homes. And she says the media perpetuates misconceptions about the danger by only reporting certain kinds of crime. “The stories that we hear [in the media] tend to magnify the victimhood of the middle class,” she says.

Allan Storey, national chairperson of the advocacy group Gun Free South Africa, says there is another lesson to be drawn from the Pistorius tragedy. At heart, he says, the problem is guns. “We’re a very violent society, and what guns do is ratchet that violence up,” he says.

Storey says if Pistorius had not been armed with a gun, even if he had mistaken Steenkamp for an intruder, the incident would not have been fatal. Storey says the moral of the tragedy is that South Africa should have fewer guns, and better compliance with existing gun laws.

His organization is lobbying authorities to crack down on illegal firearms (an estimated 2,000 guns go missing each month in South Africa) and is trying to convince legal gun owners to give up their weapons.

“If we can reduce the amount of guns in society, gun violence is automatically reduced,” Storey says.

These three advocates may disagree on what lessons should be drawn from the Oscar Pistorius case. But there is one thing they all agree on: Before he shot his girlfriend, Oscar Pistorius was a symbol of hope and the power of the human spirit.

Now, as his trial begins, he will be transformed into a symbol of something else. The question is, what?