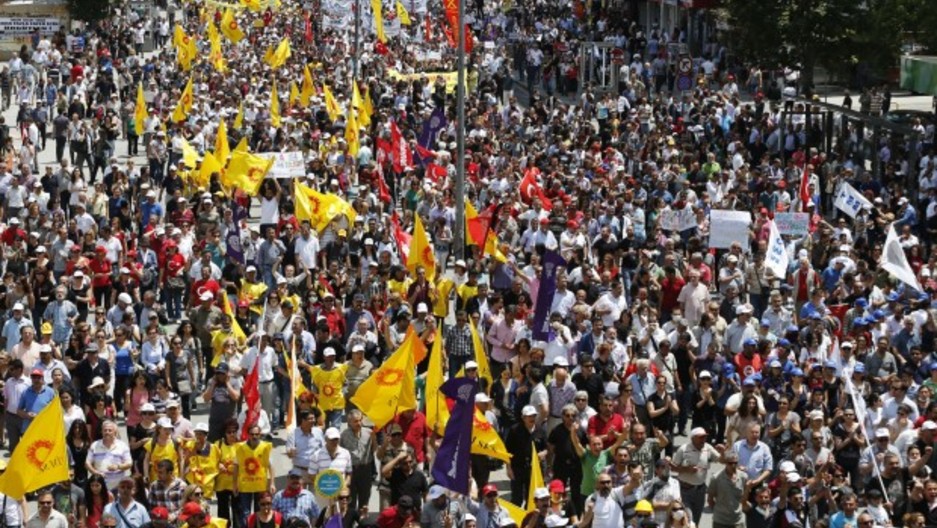 Anti-government protesters march during a recent demonstration in Ankara, Turkey.

Short of JK Rowling, you would have a really hard time making this stuff up. The political situation in Turkey now is like something straight out of Harry Potter: an elusive dark force running a “parallel state” from afar.

But the “he who must not be named” here is self-exiled Islamic cleric Fethulla Gulen.

“On the other side of the ocean, a preacher put together a montage!” Erdogan yelled recently to a crowd of ardent supporters. “Hey preacher!” Erdogan called out, again not speaking Gulen’s name, "If you’ve done no wrong, come back to your homeland!”

What exactly has this supposed “dark lord” been up to?

Since late January, someone — Erdogan blames Gulen — has been posting online audio recordings of phone calls between a person said to be Erdogan and members of his inner circle. Many are incriminating, like this supposed conversation between the prime minister and his son, Bilal (translated from Turkish):

Bilal: Hi Daddy, I’m calling to tell you we mostly took care of it.

Erdogan: By saying “mostly,” did you fully dissolve it?

Bilal: We have not fully dissolved it, Daddy.

The translation is courtesy of an English-language newspaper with ties to the Gulen movement.

In the most sensational recording yet, the two men are talking about moving huge sums of cash out of their homes. At one point, the man who’s supposedly Bilal says, “We still have 30 million euros that we could not dissolve. Berat thought of something though — there was an additional $25 million Ahmet Çalık should receive. And with the remaining money, we could buy a flat in Şehrizar.”

The man who is supposed to be Erdogan warns that their phones might be tapped. “Do not talk like this on the phone,” he says.

The purported calls would link Erdogan to a corruption scandal that’s been plaguing Turkey’s ruling party since December.

Erdogan says the calls are fake, and he has vowed to take whoever is responsible to court. More recordings continue to pop up online. Erdogan and his supporters charge that people affiliated with Gulen are trying to bring down his government and have infiltrated most government institutions.

Whatever the truth, the scenarios are grim: Either a secret investigation has uncovered an unbelievably corrupt and reckless prime minister, or someone is making this all up, including the phone calls.

The graft probe is affecting all aspects of Turkish society. Since it began, Erdogan’s government has purged the police force and passed controversial laws giving itself more power — including a law that allowed the government to block websites without a court order. Just this week, a law went into effect giving the government more control over judges.