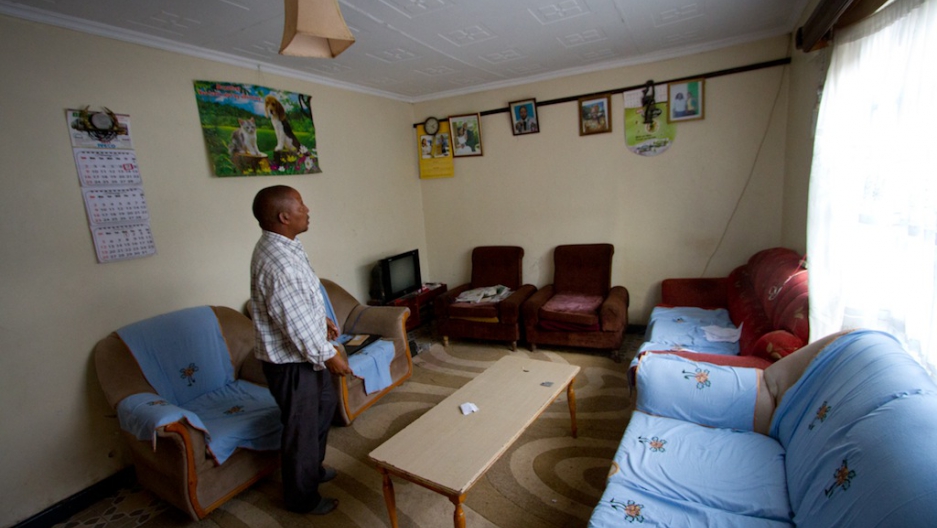 Samwel Wambiri stands in his home located on the Tassia II land, on the outskirts of Nairobi, Kenya.
Credit: Jacob Kushner
Share

NAIROBI, Kenya—This, says Samuel Wambiri, is how corruption can disrupt a life in Kenya.

Ten years ago, the 54-year-old father of three purchased a small plot of land on the outskirts of Nairobi for a modest 315,000 shillings. That's about $3,700, which Wambiri agreed to pay over 10-years. And upon that land, Wambiri built a home where he and his wife could retire.

But last month, just as Wambiri had finished paying it off, the agency that sold him the land announced some troubling news: Wambiri would have to pay 920,000 shillings, or $10,824 more — four times more than his original investment. That’s because the Nairobi County governor decided Kenya’s National Social Security Fund (NSSF), which sold the land, needed to build a sewage system and access roads through it at significant cost.

The NSSF announced it would transfer the cost of the utilities to the landowners themselves.

“I was happy that I had finally finished paying for my land,” Wambiri said. “I was looking for somewhere to settle, and I settled.”

But now, Wambiri and an estimated 5,500 fellow small-parcel landowners in Nairobi’s Tassia II neighborhood may be forced to vacate their new land altogether if they don’t find a way to pay the bill.

“More than half the occupants here have not finished to pay the first 315,000” shillings required by the contract over a 10-year period, Wambiri said. “How do you expect them to pay 920,000?”

As if the land issue wasn’t enough, last month NSSF board member Jacqueline Mugo accused the NSSF leadership of awarding the sewage and road contract to a Chinese firm in a secret process—and at a highly inflated price. China Jiangxi was hurriedly awarded the $59 million contract in December just two months after the tender was announced. In a breach of the official tender process, the NSSF management did not consult members of its board during the interim.

“I did not approve of the project because it was not profitable,” Mugo said during a parliamentary hearing this month over what has quickly become one of Kenya’s two most prominent political scandals. “The idea of spending a colossal sum of 5 billion shillings … is indeed ill-advised.”

Kenya’s parliamentary investments committee is expected to decide whether to revoke the Chinese contract and re-auction it in a more transparent process. It will also decide who—the small landowners or the NSSF—should pay for the utility construction.

If the NSSF is forced to pay, 1.5 million workers who contribute to the fund fear their retirement payments will be delayed on account of the fund’s mismanagement and resulting reduction in cash. Precedent may justify their concern: 52,000 Kenyan teachers are still waiting for their pension checks from a similar government pension fund some 17 years after they retired.

If the landowners are forced to pay, many may default and face eviction. Both the landowners and the union members say the so-called “Tassia II scandal” is a setback for a growing Kenyan middle class that is buying land, building homes and accumulating pensions with the hope of a stable retirement.

“This is a criminal case, and if anybody cares about Kenyan workers these people should have been arrested long ago,” said Francis Atwoli, Secretary General of the Central Organization of Trade Unions (COTU), an umbrella organization that encompasses several unions whose members’ pensions rest in the NSSF fund. In January, the energy workers’ union and others vowed a nationwide strike over the matter.

“You want people’s confidence in a pension fund to invest, so they’re willing to put more money into it… it’s about creating confidence, changing people’s attitudes towards savings,” said David Cartwright, an Australian businessman whose Kenyan tech employees will soon begin contributing to the $1.5 billion NSSF pension fund.

Cartwright said that unlike in Australia, Kenyan workers have no choice where their pensions are held.

“If I have to put my money in the NSSF, that doesn’t lend itself well to a competitive environment,” he said.

On a slow afternoon on the controversial Tassia II land, men in hard hats push wheelbarrows of dry cement toward a partially finished apartment building. Around them, the shells of homes and buildings in various phases of construction give the impression of an up-and-coming, middle-class neighborhood.

The NSSF has owned the Tassia II land since the early 1990s. In 2003, as Nairobi residents clamored for new land and housing, its board of trustees decided the time was ripe to sell it. They did, dividing it into 5,500 plots, which went to developers, squatters and middle-class businessmen like Wambiri.

In the decade that followed, Wambiri built his home slowly, room by room, using money from his job distributing milk to restaurants and cafes.

“I came here because the land was cheap, because I heard there was land I could afford,” he said. “It is a good location because it is right by the airport, the industrial zone. It is right by one of the main roads in Kenya, (and) the airport.”

Wambiri says he’s frustrated by the government's demand for more money beyond what was agreed to in the original contracts.

“I was happy that I had finally finished paying for my land. I was given my certificate of clearance last year and am awaiting my title deed,” he said.

Now, Wambiri is working to organize the other residents of Tassia II to bring a lawsuit against the NSSF for failing to respect their contracts.

In the meantime, he waits to see who Kenya’s Parliament will stick with the bill for the controversial Chinese contract.

Anthony Langat is a political journalist working for the Center for African Journalists in Nairobi. Originally from Nakuru County, Kenya, he holds degree in journalism from Egerton University. He is currently pursuing his Masters in Communication Studies at the University of Nairobi.