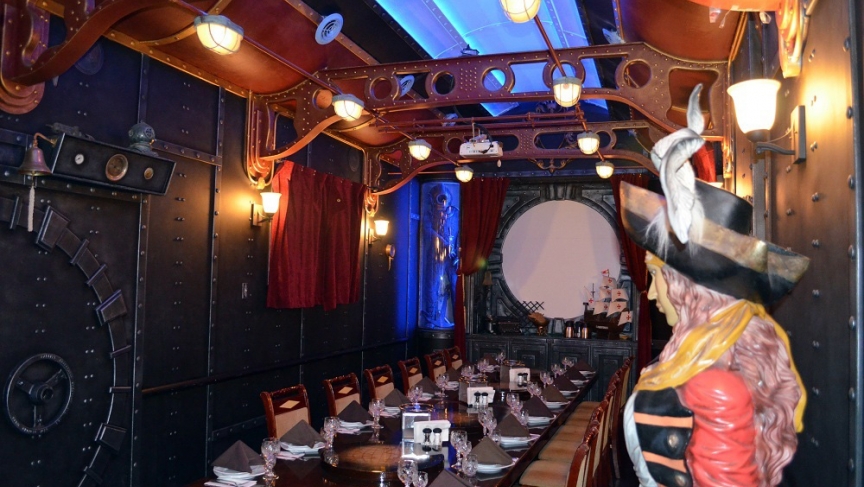 Gambrinus restaurant, a local hangout in Brighton Beach, Brooklyn. One waitress says people come in the summer to peel shrimp and drink beer outdoors near the ocean.

About twice a year I hit Brighton Beach in Brooklyn, usually with another Russian friend.

We grab some comfort food, enjoy the sight of women wearing leopard print unironically, and make sure to pick up some really bad vodka in a Kalashnikov-shaped bottle.

A lot of us Russian-born Americans have a love-hate relationship with Brighton. It’s a time capsule that manages to combine both the reassuringly familiar and the super uncool aspects of our Cold War youths.

“It’s the same. People are not changing that much, you know.”

That’s what Inna Litus told me. She’s been working as a cook at Gambrinus, a pirate-themed restaurant and beer hall in Brighton Beach, for two years, but she’s lived above the restaurant for almost 10.

Even the names don’t change — Inna is also my mother’s name.

Tonight I’m not accompanied by my usual Russian nostalgia seekers, but a group of Americans. Our table includes a three year old, a female sword swallower, and two vegans. I’m mostly worried about the vegans. As my Russian grandmother used to say, “If it isn’t meat, it isn’t food.”

I shouldn’t have worried — the plate of pickled vegetables our waitress puts in front of them looks like a page torn from a food magazine. And I seriously want to faceplant right into their bowl of fried potatoes.

Despite the tourist-trapping pirate statues and fishing nets, Gambrinus is still very much a local hangout, a fixture on the boardwalk scene for over 20 years now.

As our waitress, Svetlana Castro explains, “People love this restaurant. Some customers come here up to five times a week. Not every restaurant can claim that. Around 50 percent are regular customers, to sit here in the summer, peel some raw shrimp, have some beer outside by the ocean, after the beach.”

It’s hard to imagine Brighton Beach without that idyllic shrimp-eating scene, but Hurricane Sandy shut all the boardwalk restaurants down for a month or more. On the other side of Brooklyn, my husband and I spent the storm bored at home, binging on "Arrested Development."

Out here, Gambrinus was flooding, and Inna was in serious cat-rescue mode.

“Like I was swimming,” Inna said. “I was coming home because we got stuck in a car with my brother on Neptune Avenue, so I was swimming to get home. It was crazy. Why would I go home? I cared about my cats that I have at home.”

I feel like there’s a metaphor here somewhere. This is where my friends and I come to remember our fresh-off-the-boat roots, to laugh and to drink and celebrate our lost accents. But when the storm hits, we’re sure to be someplace else, someplace safe.

It turns out I’m only the latest in a line of Brighton Beach nostalgia seekers. You could even call nostalgia-seeking a long-standing tradition here.

“The owners of this restaurant opened it in homage to the same restaurant in Odessa,” Svetlana explained. “It seems like they really missed it, and decided to make another one — another seafood, beer hall.”

The original Gambrinus looks just like this one, Svetlana told me. Dark Wood. Pirates. And lots and lots of beer.