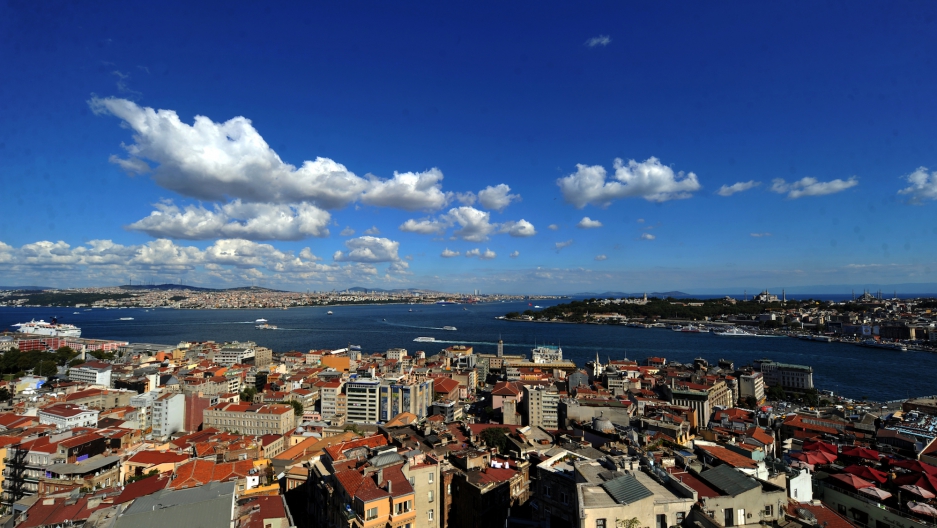 The Bosphorus river is pictured from the Galata Tower in Istanbul.
Credit: Ozan Kose
Share

ISTANBUL, Turkey — Istanbul’s Bosphorus Strait is a world-renowned tourist attraction. Every day, thousands of sightseers go through by boat to see the historical and modern architecture on both sides, as well as the massive tankers that pass slowly by. But the idyllic waterway hides a dark side in plain sight.

The US Energy Information Administration calls the Bosphorus and Dardanelles Straits, the latter 140 miles southwest of Istanbul, “one of the busiest and most dangerous choke points in the world.” Almost 60,000 vessels, including 5,500 oil tankers, snake through the narrow, twisting waterway every year. The problem? Increasingly, they’re carrying materials you really wouldn’t want involved in a collision — not just oil, but weapons and radioactive materials.

Turkey’s prime minister, whose office overlooks the Bosphorus, can do nothing to regulate its use: The 1936 Montreux convention ruled open access for all civilian vessels in peacetime. Naval vessels of all countries can pass through the Bosphorus with few restrictions.

Ships carrying dangerous cargo such as nuclear or radioactive material are required to inform authorities up to 72 hours before entering the Bosphorus, but experts such as Nilufer Oral, the deputy director of the Istanbul Bilgi Marine Research Center for the Law of the Sea, say spot checks on cargo, which would be necessary in order to enforce this rule, don’t happen.

The last vessel to transport radioactive material passed through the Bosphorus “six months ago,” according to Capt. Mustafa Can, the director of Transbosphor, an Istanbul-based maritime transport company. Can declined to elaborate on details of the ship in question, but when asked whether vessels are regularly transporting nuclear and radioactive waste through the strait, he wrote simply: "There is not too much rule[s]. Agent can handle easily."

Levent Kalfa, the head of the government-run Vessel Traffic and Pilotage Services Department, says he is unaware of radioactive material having passed through the Strait during this time period. The Directorate General of Coastal Safety, when asked about Capt. Can’s claim, explained how the system works: “Notice [for what cargo is on board] is based on the basis of statement in Sailing Plan of a vessel and, it is known by this notice. There have not been such notification[s] in recent months.”

If one of Transphobor’s ships sailed beneath the bureaucratic radar, it’s conceivable that others have as well. Transbosphor isn’t the only company in the business: An Istanbul-based representative of shipping company Arkas Line also confirmed that his company ships hazardous class 7 (radioactive) and class 8 (corrosive) material through the Bosphorus.

The Bosphorus has proven to be an important sea route in the course of the war in Syria. Last June, an unidentified Pentagon official told CNN that parts of a major air defense missile system were thought to have been shipped by Russia to Syria. In January 2012, the Russian-owned cargo vessel Chariot docked at the Syrian port of Tartous carrying between 35 and 60 tons of munitions from Russia and having passed through the Bosphorus, according to Reuters. Today, Russian warships are regularly seen in the Bosphorus en route to Syrian waters in the eastern Mediterranean, due to arms deals between Moscow and the Syrian government that pre-date current EU and US military sanctions.

A report published last September by the Washington, DC-based research organization C4ADS titled The Odessa Network, found that a shadowy network of Ukraine-based individuals and logistic companies is responsible for transporting weapons out of Russia and Ukraine “on behalf of government sellers.”

“Transport of complete missile systems is rare these days due to international consensus,” Karl Dewey of the defense and security analysis firm IHS Jane’s told GlobalPost. “That said, there have been violations of these voluntary agreements, particularly in the early years.”

Government officials say a warship has never sunk in the Bosphorus before. It’s hard to say precisely what such an incident would entail. “In general authorities have been quite happy for conventional munitions to stay in the water,” Dewey said. Missile shipments are a different story. “Regardless of completeness of the missile,” Dewey said, “liquid fuel is very corrosive,” though only some missiles carry fuel as they are transported. The “urgency” of the recovery effort — and the recovery would be “very hard … particularly in [a] busy shipping lane” — “would depend on whether there was anything embarrassing or sensitive onboard.” With nuclear material, everything would depend on whether there was damage to the special containers now used in such shipments.

Cahit Istikbal, a maritime pilot for the Istanbul Port and Harbour, is less equanimous in his response. If any sort of warship were to sink in the strait, he said, “the results would range from bad to disastrous.”

To appreciate the likelihood of such an incident, one need only look at the lessons from other ships, including oil tankers, which pose their own risk.

The strait’s narrowness and congestion are a bad combination on their own. But in addition, the 80-degree turns mean massive tankers up to 900 feet long have little time to stop for emergencies. Opposing surface and under water currents along the 19-mile waterway also complicate ship passages. Specialized local pilots are often hired by ships to guide large tankers through the strait. They are not, however, required by law.

The transportation of potentially dangerous material through the city, though not illegal, has alarmed many.

In 1979, Aksit Ozkural, the general manager of the Turkish Marine Environment Protection Association, saw firsthand what happens when disaster strikes the Bosphorus. “An oil tanker collided with a Greek cargo ship and the explosion blew in the windows of houses across the area. The petroleum sank to the sea bed killing all animal and marine life,” he said. The accident involved a Romanian supertanker carrying 94,000 tons of petroleum. Forty-three crew members were killed and the consequent fire burned for days.

In 1994, 27 people died when a similar collision led to the spilling and burning of around 30,000 tons of petroleum in the strait north of Istanbul.

Nilufer Oral says a number of regulations introduced in recent years have helped reduce the chances of a collision.

The Turkish Straits Vessel Traffic Service (VTS), introduced in 2003, monitors vessels in a fashion similar to an air traffic control center, and has significantly reduced the potential for accidents, she said. Also, to help reduce the potential for a major accident, supertankers are barred from traversing the strait at night.

“However,” Oral said, “what you should look at are the number of ‘missed accidents.’"

“Missed accidents” are the groundings, collisions, and engine failures that could have developed into or contributed to a more serious accident, but didn’t. The number of minor mishaps or near-misses indicates what the risk might be of a major accident happening in the near future.

The Bosphorus’s “missed accidents” list includes at least eight incidents of groundings, collisions and engine failures on the Bosphorus since last May alone. On Jan. 31, a 1,000-foot container ship destined for Istanbul ran aground north of the Dardanelles Strait. With increasing volumes of crude oil being produced by Kazakhstan and Azerbaijan in central Asia destined for Western Europe passing through the strait, the congestion and potential for collision is set to grow. The weapons shipments, meanwhile, continue.