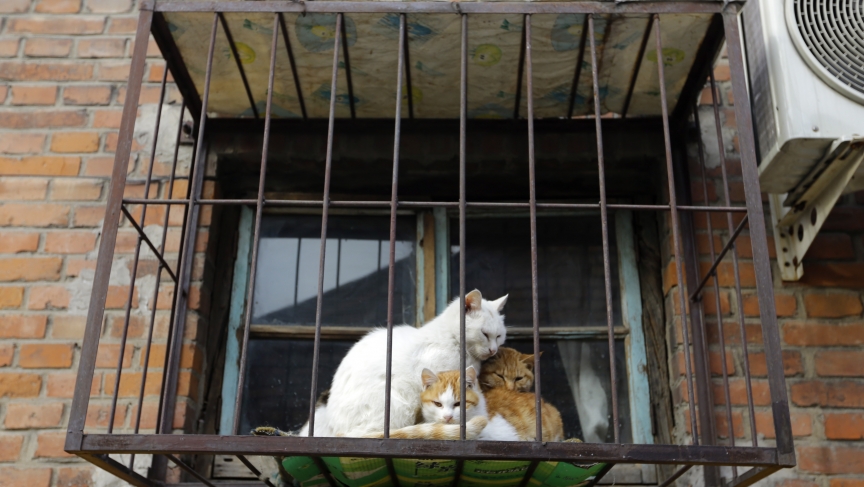 Cats are seen in a steel cage covering a window at an old residence in central Beijing, December 10, 2013.

In most parts of the Chinese capital Beijing, stray cats are considered unwanted guests. Their numbers are estimated to be around 200,000.

However, around 200 privileged felines enjoy a protected existence in the Forbidden City, former home of the Chinese emperors. They are there to protect the priceless relics in the Imperial Palace complex from rats and vermin. And officials say there are no signs of any cat claw marks on any of the artifacts.

Museum curator Ma Guoqing has suggested they could even be descendants of royal pets, according to the BBC. One thing is for sure: it’s unlikely they realize quite how lucky they are.

For Ukrainian expats around the world who have been watching the scenes in Kiev’s Independence Square, sending money to help the protestors is no easy task. Paypal will only transfer money out of Ukraine — while international bank transfers can take days to complete.

Meanwhile, those who have supported the revolution by camping in the square need funds now, to help pay for food, clothing and medical supplies. So this week, a new campaign began to raise money by asking for donations of Bitcoins, the cryptocurrency that can be transferred instantly. Protestors are being photographed holding up signs displaying the Bitcoin symbol, to encourage those watching to donate. The website Coindesk has the story.

Myanmar welcomes its Jewish community back

If you walk down Mahabandoola Street, in Yangon, the capital of Myanmar, you may notice a little, blue Star of David painted above a row of ordinary-looking shops. It’s on the side of a beautiful, and old, Sephardic synagogue. The Congregation Mesmuah Yeshuah is a relic of Burma’s Jewish history. It’s been more than 50 years since regular services were held there, but ever since the regime became nominally democratic in 2011, Jews and non-Jews have started visiting the synagogue once again. Naomi Gingold reports for PRI’s The World.

Google's mapping services continue to cover new ground, photographing increasingly remote parts of the globe. Through Google Street View, you can visit many corners of the world from the comfort of your home. One Google team working in the Canadian tundra managed to go beyond the typical house shot — photographing polar bears at close range with a 360-degree camera.

Google released the pictures for International Polar Bear Day. The Independent has more about Google's trip to Churchill, Canada, the "polar bear capital of the world." Google has built a special collection of its images, including many of the polar bears.

The Middle East is just a stone's throw from Disneyland

Anaheim, California attracts millions of visitors every year, usually to Disneyland. Now, some community leaders and business owners are hoping to promote a new attraction — part of the city known to some as “Little Arabia.”

The two-mile stretch of Brookhurst Street has attracted Arab-owned businesses since the 1980s — and today, many people travel for hours to buy delicacies and items there they can’t find elsewhere in the state, such as the nine different varieties of Kibbeh, a meat dish served at one of the street’s restaurants. But the idea of officially branding part of Anaheim as Little Arabia has some residents upset. Josie Huang reports about the controversy for PRI’s The World.

The Pacific seems to be spawning the first typhoon of 2014. Three storms are forming near Fiji, Guam and the Solomon Islands, according to AccuWeather, and could threaten land later in the week. The tropical low off Guam is predicted to be the first one to reach typhoon status.