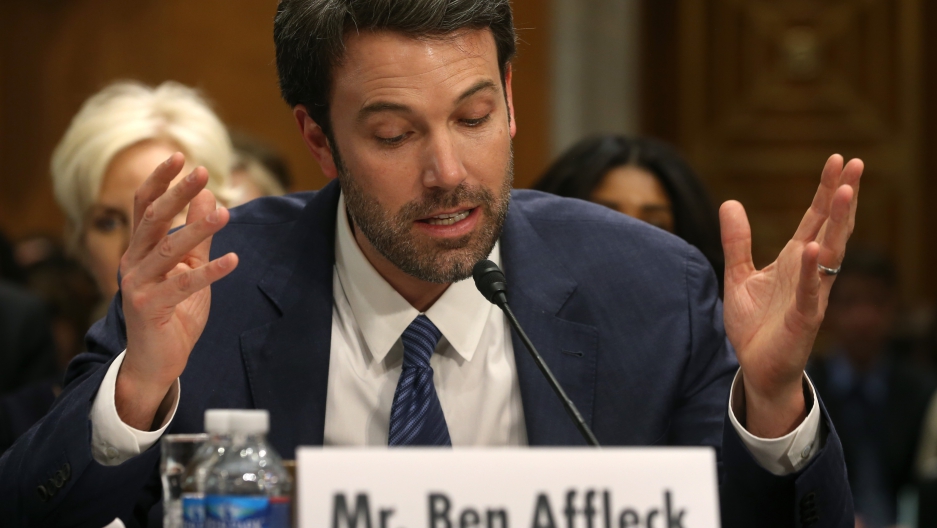 NAIROBI, Kenya — This Wednesday, Ben Affleck testified before the Senate Foreign Relations Committee as an expert on Africa. Yes, Ben Affleck: actor-director Ben Affleck, Argo Ben Affleck and, lest we forget, J-Lo Ben Affleck. Ben Affleck, whose tuxedo stands a decent chance of being analyzed on live television during the Oscars this Sunday. He was invited to guide American lawmakers on their policy toward the Democratic Republic of Congo.

Ridiculous, right? Actually, no. Affleck has been involved in eastern Congo for years now. In 2010, he set up an organization called the Eastern Congo Initiative after making repeated visits to the region. It raises money and funnels it to local civil society organizations. Affleck’s commitment and sustained engagement means that if you’re looking for an advocate who has some clue about what’s actually going on and doesn’t need to take his lines from a teleprompter, you could do a whole lot worse.

If you’re going to be a celebrity with a cause in Africa — and sometimes it seems like the continent has been colonized by the A-Z listers — you could do worse then follow Affleck’s lead. A lot worse.

To help you separate the serious from the silly, we present GlobalPost’s Africa Celebrity Do-Gooder Scorecard.

Note: this list is not exhaustive, as it appears to be an unspoken rule that pretty much every celebrity has to say something about Africa at some point. Feel free to tweet your own suggestions using the hashtag #StarsLoveAfrica.

He does it quietly (the Affleck name isn’t anywhere to be found on the ECI website) and with an unusual degree of humility for a celebrity. Academics, analysts and self-declared experts may scoff at his credentials but he’s spent time on the ground and has shown commitment over time. He’s cajoled American lawmakers before speaking to Congress in 2012 and when he speaks it attracts attention to a place often ignored.

George Clooney speaking to John Kerry and John Prendergast of the Enough Project after a press conference in Juba marking the beginning of South Sudan's vote for independence. (Tim Freccia/Enough Project/GlobalPost)

Sustained engagement, money where his mouth is

Clooney has shown long-term commitment to Sudan’s restive regions, first in Darfur, then southern Sudan, the disputed territory of Abyei and rebel-held Nuba Mountains. With his own money, he funds the Satellite Sentinel Project [http://www.satsentinel.org/] which tracks and exposes war crimes and human rights abuses along the contested border between South Sudan and Sudan. His protests against President Omar al-Bashir’s regime have seen him (and his father) arrested in Washington.

Mia Farrow takes part in a mass at the Bossangoa cathedral on November 10, 2013. (Matthieu Alexandre/AFP/Getty Images)

The actress and ex-wife of Woody Allen has invested herself in Darfur for years and visited the conflict-riddled western region of Sudan in 2004. She’s also spoken on a range of other examples of mass atrocity and manmade human suffering in Africa and elsewhere, although she’s awfully free and easy with the G-word (genocide, that is). There’s little doubting her sincerity and long-standing commitment, but it also begs the question of how effective celebrity-led advocacy is: after all the years of attention and concern the conflict in Darfur rumbles on regardless.

The television host and actress opened her $40 million Oprah Winfrey Leadership Academy for Girls (zero points for humility here) in South Africa in 2007. Within a year it was mired in allegations of sexual and physical abuse. After this rocky start the academy got its house in order and has been doing what it was supposed to do: give poor South African girls the opportunity for a better life.

The modern celebrity obsession with Africa, or at least being seen in Africa, can be traced back to Bob Geldof’s 1984 Band Aid song and 1985’s Live Aid concert. The U2 frontman and the Irish rocker have long been outspoken activists and advocates for aid to Africa roping fellow celebrities, the rich and powerful into their efforts. Neither are shy of using Africa to make a bit of cash with Bono and his wife advertising Louis Vitton luggage and Geldof setting up a private equity fund. Their brand of musical money-raising to end poverty rubs a lot of people the wrong way but undoubtedly the most invective-filled response comes courtesy of British comedy writer Jane Bussman whose stand-up show "Bono and Geldof Are C###s" sold out both the Sydney Opera House and London’s Frontline Club last year.

Oh dear. When faced with a torrent of criticism for her preferential quicky adoption of her first Malawian child, a boy called David Banda in 2006, Madonna set up a charity to build an academy in Malawi to improve the lives of those not lucky enough to be rescued by a global music star. The charity all-but collapsed in a riot of corruption allegations and name-calling. Madonna’s falling-out with Malawi seemed complete when State House called her a “bully” (and much else besides). Others, including writer Binyavanga Wainaina, then weighed in with their own scathing assessments of Madonna’s attempted do-goodery. Today the charity limps on, building primary schools and sponsoring kids in Malawi.

The flame-haired enfant terrible of fashion, dressmaker to the ‘70s punk scene, and designer of vertiginous footware visited a Nairobi slum a few years ago and vamping it up alongside models in a shoot for her Ethical Fashion Initiative, which pays local folk in Kibera to stitch together handbags to sell to wealthy Westerners (for around $200). In our humble opinion, it is hard to see how any of this offers the seamstresses of Kibera much more than the opportunity to be the authentically slummy backdrop to a photo shoot.

Clueless, embarrassing for all involved

Downton Abbey’s Lady Cora went to Sierra Leone last year as an ambassador for child-sponsoring evangelical Christian charity World Vision. It did not go well. She became a laughing-stock after a journalist from London’s Daily Telegraph invited along to cover her trip reported that she couldn’t tell the difference between Darfur (war-torn western region of Sudan) and Dakar (seaside capital of peaceful Senegal). Nor did she know much about the country she was visiting or the charity she was with. Amanda Taub and Kate Cronin-Furman of ‘Wronging Rights’ comprehensively shredded the whole sorry affair in this article for Warscapes.