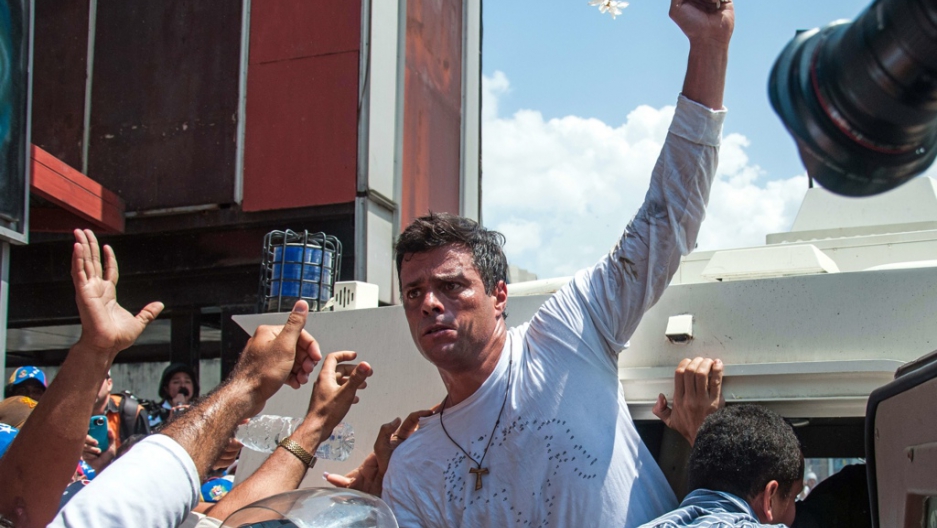 Leopoldo Lopez, an ardent opponent of Venezuela's socialist government, turned himself in during a demonstration in Caracas Feb. 18.
Credit: Cristian Hernandez
Share

LIMA, Peru — Venezuela is close to breaking point. Shortages of basic goods and some of the world’s highest crime and inflation rates triggered protests earlier this month that appear only to intensify with each attempt to repress them.

More from GlobalPost: Why they're protesting in Venezuela

As the government and opposition struggle for the upper hand in bitterly polarized Venezuela, GlobalPost runs down the key players in the fight.

Before his death in March, El Comandante Hugo Chavez personally anointed Nicolas Maduro as his political heir, a decision the nation then ratified in April when the 51-year-old former bus driver and union leader won the presidential elections. Maduro was a longtime Chavez ally, first visiting the leftist army officer as he languished in prison for a 1992 failed coup attempt. During Chavez’s presidency, Maduro rose to become foreign minister and then vice president. He was sometimes viewed as a “pragmatist” within the leader’s inner circle. Since taking office, however, Maduro has been full of surprises. Routinely described as lacking his mentor’s “charisma” and political skill, Maduro has responded to Venezuela’s dire straits with increasingly extreme — and sometimes plain outlandish — rhetoric. He dismisses just about anyone who questions his government as “fascist,” and has even claimed Chavez has returned from beyond the grave to offer him advice — in the form of a little bird. As Venezuela speeds toward a dead end, Maduro appears increasingly out of his depth, but unwilling to take his foot off the accelerator.

The anti-government protests convulsing Venezuela initially began in early February as a small student demonstration over an attempted rape in the western city of San Cristobal. But the unrest quickly mushroomed as some opposition leaders called on the public to take to the streets across the country to express their anger over surging violent crime, economic mismanagement and the president’s authoritarianism. Now, although many of the protesters are young students, and often from relatively affluent neighborhoods, their ranks are swelling with people of all ages and from all walks of life. As radical youths — many of them barely out of diapers when Chavez took power in 1999 — place burning barricades in the streets, many older Venezuelans are also marching or participating in “cacerolazos,” a form of protest by loudly banging pots and pans. President Maduro claims the demonstrators have the support of just 5 percent of the population. Although that appears a serious underestimate, many neighborhoods, especially the poorest, have largely been unaffected. Analysts say the protesters are unlikely to achieve their goal of forcing the president to step down until a larger chunk of Venezuela’s poor majority join them.

More from GlobalPost: This is what it looks like on the ground in Caracas

After losing to Maduro by less than 2 percentage points in April’s presidential election, Henrique Capriles cemented his status as the unofficial but undisputed leader of the opposition — until now. Scion of one of Venezuela’s richest families, the 41-year-old is the basketball-playing governor of wealthy Miranda state, which includes much of the capital Caracas. Capriles, too, is sometimes accused of lacking charisma. But he has proven himself articulate, tenacious and energetic, sidestepping the government’s stranglehold on TV stations with tireless, old-school grassroots campaigns — including stump speeches in many of Venezuela’s grittiest neighborhoods. A singleton grandson of Jewish victims of the Holocaust, Capriles, who professes Catholicism, has also withstood a barrage of homophobic and anti-Semitic insults from the government and its supporters with quiet dignity. But the born moderate may have lost ground to more radical opposition rivals in recent weeks over his reluctance to back the protests. He argues that for the opposition to take power, they need to reduce Venezuela’s polarization rather than exacerbate it, including by winning over disaffected Chavistas. Angry demonstrations, he argues, will not achieve that goal.

The Harvard-educated former mayor of Chacao, an upscale Caracas district, Leopoldo Lopez achieved global fame this month with his calls for peaceful anti-government demonstrations nationwide — and his subsequent arrest for supposedly inciting violence. Telegenic and undoubtedly ambitious, Lopez, 42, has grown impatient with Capriles’ long game, believing that Venezuela’s twin economic and public safety emergencies are too severe for the nation to wait until the next scheduled presidential elections in 2019. It remains to be seen what charges, if any, Lopez may face. But a conviction and jail term might only further burnish his reputation, turning him into Latin America’s highest-profile political prisoner. His arrest and defiance have already catapulted him to a position where he’s legitimately being discussed as a threat to Capriles’ presidential aspirations. Yet other opposition figures don't fully trust him. Thanks to WikiLeaks, we know that he’s sometimes viewed as “arrogant, vindictive, and power-hungry,” albeit also a brilliant organizer. He’s also been accused of actively participating in the failed 2002 coup against the democratically elected Chavez.

Another longtime Chavez ally, Diosdado Cabello is currently speaker of Venezuela’s National Assembly and regarded as the leading Chavista hardliner. A former army officer, the 50-year-old holds huge behind-the-scenes power and has strong ties to the military. He’s usually viewed as the biggest danger to Maduro from within the ruling United Socialist Party of Venezuela (PSUV). Opposition leader Henrique Capriles has even cautioned against the protesters’ calls for Maduro’s resignation, warning that unseating him would likely pave the way for the ambitious Cabello to take over. As speaker, Cabello has overseen various measures in the National Assembly that critics say undermine Venezuelan democracy, including banning opposition lawmakers from speaking until they accepted Maduro’s presidential victory.

Nearly a year after his death from cancer at the age of 58, “El Comandante” could hardly cast a longer shadow across Venezuela. Revered by the poor majority as the country’s first president to give a damn about them, Hugo Chavez’s folksy, direct style — including routinely lambasting the rich during his hours-long televised diatribes — was just part of his appeal. His 14 years in power genuinely transformed the country. He achieved a massive drop in poverty levels through his “missions,” vaunted social programs aimed at curbing hunger, disease and lack of opportunities in Venezuela’s overcrowded slums. But the former army officer’s highly personal governing style also sowed the seeds of many of his country’s ills today. Chavez frequently made vital national decisions on a whim and destroyed the system of democratic checks and balances in all but name. His use of petro-dollars to finance social policies has also been disastrous, economists say, leaving Venezuela utterly dependent on oil exports. Meanwhile, some analysts blame his willingness to arm pro-government militias, known as “colectivos,” for helping fuel the violent crime wave that makes Venezuela one of the deadliest peacetime nations on Earth. If there were any doubt about Chavez’s influence beyond the grave, then his successor and political disciple President Maduro dispels it with his constant references to the late leader.

Washington’s alleged role in Venezuela could hardly be more contentious. Maduro has intensified Chavez’s “anti-imperialist” rhetoric, demanding one-on-one talks with President Barack Obama over what Maduro claims is the United States’ active support for the pursuit of his ouster. Maduro has also revived the Chavez habit of expelling US diplomats for supposedly destabilizing his administration. Meanwhile, Venezuela’s vast oil reserves give Washington a genuine strategic interest in what happens there. The country remains one of the US's top five sources of foreign crude, even though Venezuela's oil exports are in decline. The Obama administration denies allegations of meddling, stressing that “Venezuela’s political future is for the Venezuelan people to decide.” But claims of US interference resonate deeply. That’s because of Washington’s long history of backing Latin America’s brutal dictators, including helping to install them in the first place — perhaps most notoriously in Guatemala in 1954 and Chile in 1973. The George W. Bush administration also appears to have been involved in planning the failed 2002 coup against Chavez, an event seared into the memory of El Comandante’s many supporters. It may not be Obama’s fault, but the clucking of chickens coming home to roost in the Oval Office must now be deafening every time Maduro sounds off.

Just like its nemesis the United States, Cuba finds itself at the heart of the debate over Venezuela's direction. That Caracas and Havana have close bonds is very public — the depth of trust was demonstrated by the fact that the ailing Venezuelan president received most of his cancer treatment in Cuba. Those ties include the personal relationships between the two countries' leaders: Chavez and Fidel Castro delighted in bear-hugging each other in public and had a shared love of baseball. Their successors, Maduro and Raul Castro, have maintained and possibly deepened that bond. Venezuela exports a reported 110,000 barrels of heavily subsidized oil to Cuba every day, a crucial lifeline for the island’s struggling economy. Meanwhile, the Cuban government has sent an estimated 40,000 of its nationals to work in Venezuela in a variety of fields, from medicine to national security. But the allegations by extreme members of the Venezuelan opposition that Raul Castro is running Venezuela have yet to be proven.

Venezuela’s poor may ultimately decide whether and when Maduro leaves power. His mentor Chavez came from the wrong side of the tracks and never forgot it, making poverty alleviation the be-all and end-all of his presidency. He lavishly spent petro-dollars on everything from vocational training to housing for the needy, making a real difference in the lives of most. The poor majority never forgot it. In October 2012, Chavez was re-elected with 54 percent of the vote. Much of that loyalty was transferred to his hand-picked successor. Nevertheless, Maduro only narrowly won last year’s presidential election. Many of the 49 percent of voters who preferred opposition candidate Capriles were likely from poor neighborhoods — a sign Maduro commands less respect and affection than his mentor. Impoverished Venezuelans are the hardest hit by soaring prices, food shortages and endemic crime. A big question remains: Will the poor turn against the government, too?

This image from Twitter could not be independently verified by GlobalPost.

Armed militant Chavista groups are at the center of the storm over anti-government protests turning violent. Critics accuse them of being thuggish enforcers, who intimidate opposition voters at polling stations and now zoom around the capital on motorbikes to square off against protesters, sometimes side by side with official security forces. Colectivo members number just a few thousand across Venezuela, with most groups hailing from Caracas slums. In quieter times, they provide neighborhood security, soup kitchens, bookshops and other community services. They undoubtedly make for a PR headache for Maduro, but many question to what degree the president or members of his inner circle either permit or actually encourage their alleged violence.

More from GlobalPost: Venezuela expats are tweeting the way for embattled protesters