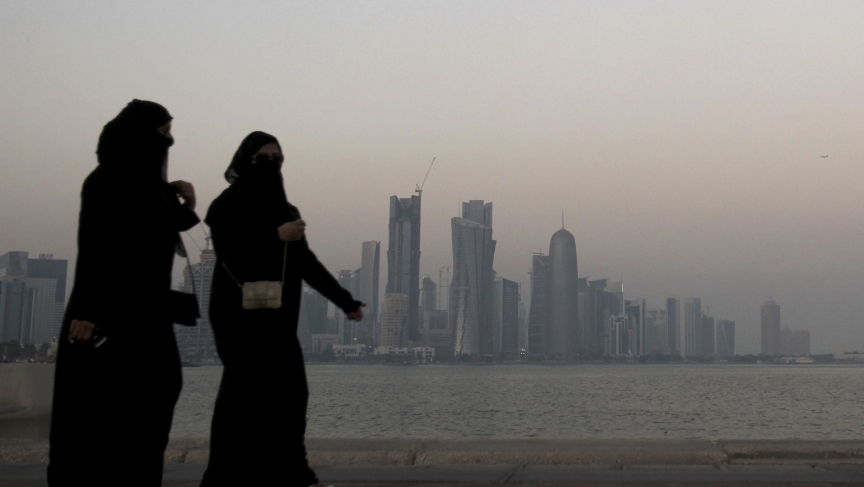 Qatar is a nation that depends on migrant laborers.

They come from South Asia to build the soccer stadiums that will host the World Cup in 2022, they build the skyscrapers that have practically risen from the sand. They work in private homes as nannies and housekeepers. And eventually they'll staff the hotels that will house all the World Cup guests.

But, as The Guardian reveals, these migrant laborers often toil in the harshest conditions — often unable to leave even if they've decided they've had enough. From the Philippines alone, more than 600 maids have sought shelter at their country's embassy, citing abusive treatment at the hands of their employers. In Qatar, employers have extraordinary control over employees' lives. In its report, The Guardian details allegations of wages withheld for months and even victims of sexual assaults being charged with having inappropriate sexual relationships.

Qatar is understood to be reviewing its migrant labor system in the wake of repeated reports of employee mistreatment.

Later this year, Swiss voters will have the chance to decide if they want to offer workers the highest minimum wage in the world — 22 Swiss francs an hour ($24.80) That compares to £6.31 in the UK, ($10.55) 8.50 euros in Germany ($11.69) and just $7.25 in the US — though some states and localities already have higher rates themselves. Switzerland doesn't currently have a minimum wage, and voters will be asked to weigh in on the matter in a referendum on May 18. Not everyone is in favor, though, of the new measure as the English language website thelocal.ch reports. Swiss economics minister Johann Schneider-Ammann has warned that the proposal would damage the country’s job market.

If you want to make a mark in Colombian politics, you better have a jingle

It's an age-old problem for would-be politicians — how do you stand out in the minds of voters? It's an even bigger problem for candidates in Colombia, where the ballots don't even lists candidates by name — just by number. That's because, due to the Colombian electoral system, there are literally thousands of candidates. To overcome this, congressional candidates in the country use jingles to reach the electorate. That's because radio reaches more people in Colombia than newspapers or TV. Creating these all important jingles takes great skill, as John Otis discovered in Bogota, Colombia, where he met some of the composers. From PRI's The World.

The faces — and feet — of Egypt's unending revolution

Iranian photographer Shirin Neshat says the sense of loss people face as they grow older is a major influence in her latest exhbition, “Our House is on Fire.” She took pictures of countless Egyptian, illustrating the price many have paid for the country's seemingly endless revolution. Her pictures focus on the simple: the faces of people who have lost sons and daughters, the feet of those who have lost their lives themselves. All of Neshat's subjects are from Egypt’s aging poor — housewives, grandmothers, mechanics, street peddlers — the kind of people whose stories aren't often featured in the mainstream media. Neshat spoke to PRI’s the World about the exhibition, and the ideas behind it.

That smog? That's an opportunity

The dreadful smog in some of China’s cities is headline news around the world. As we told you yesterday, some people have compared it to nuclear winter. But, inexplicably, not everyone is so down about the situation. One enterprising student has been putting smiles on his fellow city dwellers' faces, by putting face masks commonly used as protection against the air pollution on statues around Peking University.

The stunt has been picked up by users of the Chinese social media site Weibo, who are also reposting pictures of the former Communist leader Mao Zedong complete with an anti-smog face mask, the BBC reports.

Unlike much of the US, it's been a balmy winter in Israel. And that's been bad news for Israel's shopping malls and even its ski resorts, Haaretz reports. Stores reported sales as much as 10 percent lower and just 35,000 tourists have arrived at the Mount Hermon ski resort. A typical year sees 200,000 to 300,000.