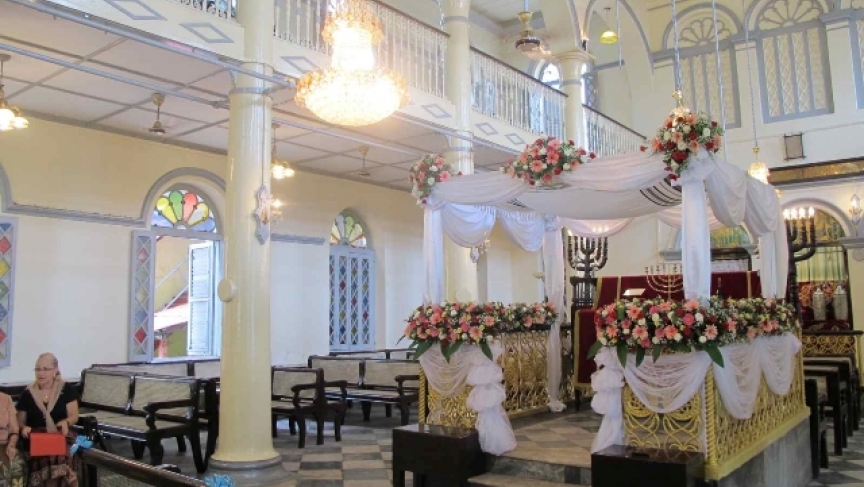 Mesmuah Yeshuah Synagogue in Yangon, Myanmar, is decked out for Sammy Samuel's wedding.

Walking down Mahabandoola Street, one of the main thoroughfares of downtown Yangon, right at about 26th Street, if you look carefully, you may notice a little, blue Star of David painted above a row of ordinary looking shops. It’s on the side of Burma’s beautiful, old, Sephardic synagogue.

It's been almost 50 years since regular services were held at Congregation Mesmuah Yeshuah, but every morning 63-year-old Moses Samuel, patriarch of Burma’s remaining Jewish community, opens the synagogue doors and waits for any visitors, Jewish or not, who might come by.

At its peak, the prosperous and prominent Jewish community numbered about 2,500. Most migrated from Baghdad during British colonial times. Burma’s then-capital, Rangoon (today known as Yangon) even had a Jewish mayor in the early 1900s.

But when Japan invaded during World War II, Jews were generally treated like British spies, and most fled.  Some returned after the war, and in 1948, when Burma gained independence, Burma became fast friends with another new country — Israel.

But in 1962, the Burmese military toppled the government and nationalized businesses. Most of the remaining Jews left, but the Samuels family stayed. Sammy says they never thought of leaving. They loved their home country and being there was important, because they wanted Jewish visitors to Burma “not to be alone.”

In 2002, Sammy got a full scholarship to go to college in the US. He moved almost permanently to New York, but every summer he’d travel back to Yangon.

One Friday evening in summer, Moses went to the synagogue alone. Sammy wasn’t feeling well, but 45 minutes later Sammy got a call from his dad begging him to come. “He sounded as if he won the lottery,” Sammy says.

Before he even got there that night, he heard the singing. About 40 American tourists had showed up for Friday night services.

“My father was so happy, he opened all the kosher wines that he had,” Sammy says.

Sammy, who was looking for a way to connect his homeland with his adopted country, got a brilliant idea. If those 40 tourists would come for Friday night services, maybe others would come, too. He started a travel agency called Myanmar Shalom, to — as he puts it — “keep the Jewish spirit alive in Burma.”

In 2011, Burma became nominally democratic, and tourists began to pour in, relatively-speaking. And Myanmar Shalom, which does group and personal tours for Jews and non-Jews, has gone from two employees to 20.

The US-ASEAN Business Council Institute (USABCI) just finished restoring parts of the synagogue, and Frances Zwenig, head of the project, says there are always tourists at the synagogue when she visits now.

And now that Myanmar Shalom can cover costs, the USABCI handed synagogue upkeep back to the Samuels Family.

Myanmar Shalom is not only easing the way for tourists, Sammy also runs a consulting company for Fortune 100 businesses trying to tap in to Burma’s untouched markets. Those businesses often bring Jews into Yangon for work opportunities — much like their ancestors did.

This past December, the local community gathered at the synagogue to celebrate the last night of Hanukkah. Sammy thanked everyone for coming and pointed out that, “the community slowly is growing.” It was the most Jews Sammy had ever seen at a local Hanukkah celebration.

As more Jews make their way to Yangon, one thing is certain: the Samuels family will be at the synagogue, waiting to greet them with open arms.