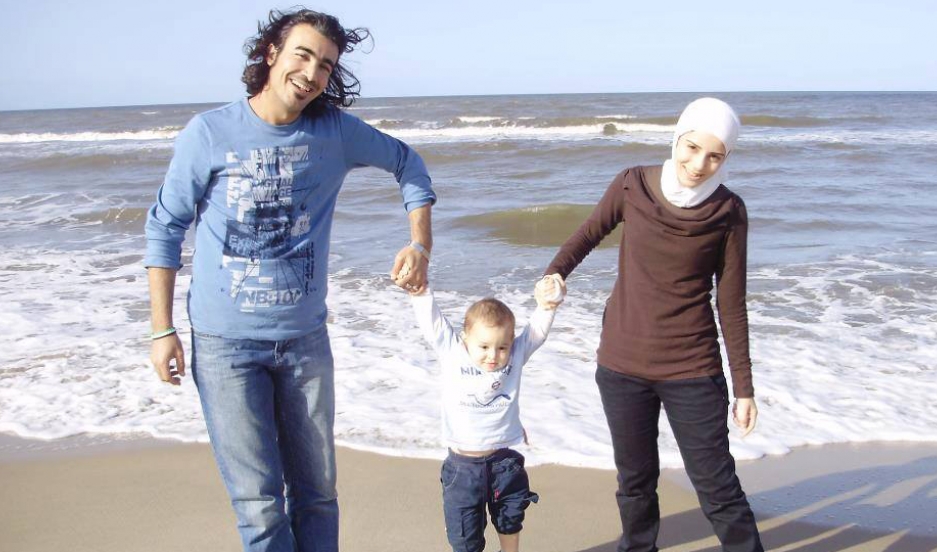 Ayham and Sania spend time at the beach with one of Sania's relatives.

Ayham and Sania met in the aftermath of a tragedy.

After dozens of members of Sania's extended family were killed by Syrian forces, Sania called Ayham, a journalist and activist in exile in Istanbul, asking him to publicize what she calls a massacre.

AYHAM: I was in a relationship at that time. Meeting Sania changed everything. I was here in Istanbul. My friend, who she was visiting, he called me and he said, "hey Ayham, how are you? I have a friend that is in Syria and she, they need help." I told him "OK, I will talk with her." We introduced each other and she told me about the massacre that happened to her and she lost 60 of her family.

SANIA: When we start talking about this story my memory goes right back to the beginning, as if it’s in front of me all over again. The massacre isn’t something that can be forgotten. 125 people were killed, 60 of whom were from my family.

AYHAM: It was really very hard. After the massacre, she told me about what happened and I give her my number and my real name and I told her "If you need anything, you can call me." Then she told me, "Ayham, can I hear your voice?" And I say it’s OK. And I call her and that was the first time we talk to each other.

SANIA: It was the start of a new love, but our conversations were really painful.

AYHAM: In the morning, I was in prayers, Friday prayers, and she was calling me, calling me. I called her and she was screaming and crying. "Ayham another massacre happened to my family!" She told me, "I have an old father and my mother is very old. My sister is a doctor also, dentist, I don’t know what could we do." I told her don’t worry. When I go home, I make some calls with my friends, activists in the land.

SANIA: My sister’s husband was wanted by the government and we were so scared one day we’d pass a checkpoint and they would take him.

AYHAM : I called my friend another time. I told him that she wants to go out. He told me, "I will do my best." I called her and told her that there will be a man coming. I told her that "I know it is hard to trust me. If you want to survive your life, you have to trust me. You have to go with this man. Don’t ask him where you are going." She told me OK. She told her family, they accept. So when they are in the road, in the car — eight from her family were looking at her in the mirror and they were thinking, "Sania, where are you taking us?"

SANIA: This is the first time we see this guy, we just want to know where we’re going. He would just look at us through the rearview mirror in the car, but he would not answer a single word. Ayham told us, "don’t worry. You need to have confidence."

AYHAM: I was sure that he will take them for the safest place. After that, she called me and told me this man take us for his house, between his children. She told me, "Ayham, we want to go to where my sisters live. He took them to her sister’s house, and they stayed there."

SANIA: I was very happy. I cried at that day. So much.

AYHAM: She called me from there. She said, "Ayham, I love you." We got married on the 6th of December.

SANIA: And now, the most important thing is that we will have a baby, on our anniversary!

AYHAM: Now the baby in our life, he is like a flower. We will try to take care of him and bring him up here in Turkey.

Editor's note: The last names of Sania and Ayham have been withheld for safety reasons.