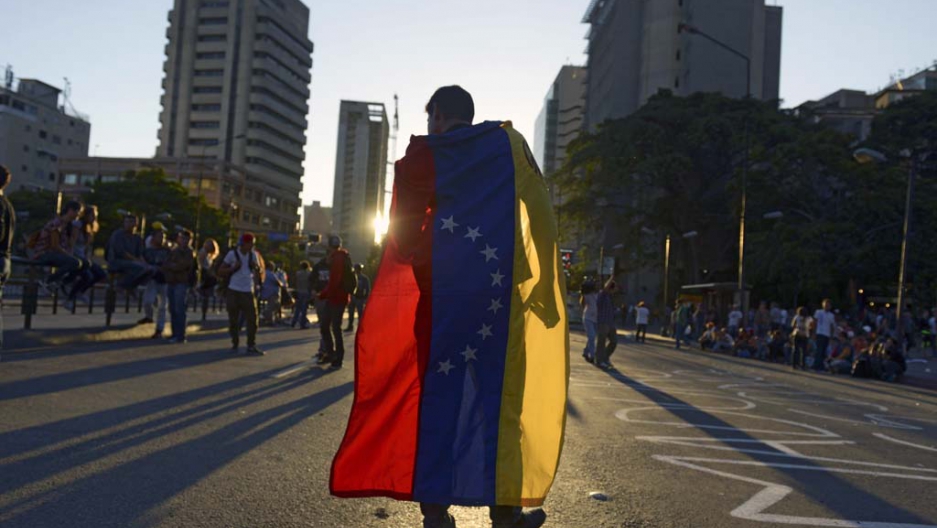 Thousands of demonstrators have filled the streets of Caracas in the last week to protest President Nicolas Maduro’s socialist government. Clashes with security forces have left at least four protesters dead.

It would be hard to know any of this if you only watched the commercial media. This time, the revolution is not being televised. Maduro has even threatened to block the little coverage CNN is giving the protests. So, as is so often the case, many are turning to Twitter.

Hashtags associated with the protest movement — like #SOSVenezuela and #PrayforVenezuela — are trending.

Jailed opposition leader Leopoldo Lopez’s supporters have been using the hashtag #LaSalida. On the other side, government supporters have used #VzlaUnidaContraElFascismo (“Venezuela United Against Fascism”).

In the middle of it all, numerous photos have been shared claiming to represent the scene on the ground in Venezuela. Some of them have gone viral. But not all of them are true.

The spread of fake or misrepresented images online is not specific to the unrest in Venezuela. It's a symptom of the social media frenzy that accompanies any large protest these days. Many disturbing, and very fake, videos have made the rounds in Syria for years.

Below are some of the images that have spread widely across Twitter misidentified as current scenes from Venezuela's protests. They have all since been shown to be false — keep an eye out.

This image of a protester being shot by rubber bullets did not take place in Caracas. It did not even take place in Venezuela. The photo was taken in Rio de Janeiro in June 2013, when Brazilians took to the streets in nationwide riots against corruption, demanding better public services and demonstrating against enormous spending for the 2014 World Cup.

Twitter user José Manuel Castillo, and others, posted this photo as a message to President Maduro to “get the hell out." The picture, which Castillo claimed was taken in the streets of Venezuela, was debunked by a quick Google image search that lead us to a Financial Times photo gallery on the Brazil protests from June 2013.

This alarming image was reportedly taken in Aleppo, Syria, in 2012. It ran with a story about the Syrian civil war in the International Business Times. The picture is described as the grizzly result of a massacre carried out by Syrian President Bashar al-Assad’s regime.

Twitter user Jonathan Mora posted the image with the popular opposition hashtags #SOSVenezuela and #PrayForVenezuela, writing that the photo needed to be seen around the world. Mora said the image was of students killed in Maracay, a city in north central Venezuela. While protests, as well as a government crackdown, have spread from Caracas to Maracaibo, Valencia and Maracay, this photo has nothing to do with it.

Hundreds of thousands of Catalans peacefully called for independence in September 2013. They formed a human chain stretching across their entire region. The demonstrators, wearing yellow T-shirts and draped in separatist banners, demanded the Spanish government allow them to hold a referendum on autonomy.

So this powerful image, which Twitter user Juan Pablo Mendoza posted, did not take place in Venezuela either. Although Mendoza suggested that in the future a human chain could one day connect the Universidad Nacional Experimental del Táchira with the region of Carabobo — where demonstrations have been taking place in Venezuela — many Twitter users assumed this event had already happened. It hadn't.

This photo is the most accurate description to what is happening in Venezuela right now. #SOSvenezuela pic.twitter.com/9c6px7wWAD

In his post on Twitter, Ezequiel Vázquez-Ger said the photograph was the “most accurate description of what is happening in Venezuela right now." While he could have meant that symbolically, it prompted other users to wrongly speculate that the image was shot during Venezuela's protests.

While this photo was taken in Venezuela, it is outdated. This was actually an AFP photo taken by Miguel Gutiérrez during Venezuelan student protests in January 2010.

After Twitter user @SoyOtraJessi posted the picture, many others suggested it was dated, because of the presence of the Metropolitan Police of Caracas in the picture. The Metropolitan Police force no longer exists. In 2009, the Venezuelan authorities disbanded the security force, paving the way for the Bolivarian National Police to take over operations in the nation’s violent capital.

According to a thread on Reddit, this photograph was taken during a riot in Bulgaria in November 2012. The image, which was also posted on a revolutionary news website, was taken by Stefan Stefanov and shows a young female demonstrator gripping the shoulders of a Bulgarian policeman.

After posting the photo with the caption, “You and I are Venezuelans my friend,” Daniela Frias’ post was retweeted more than 1,700 times. It's possible some of those retweeters were confused.

Jorge Rodriguez, a mayor of one of Caracas’ districts and an ally of the Venezuelan president, tweeted an photo on Feb. 16 from an earlier pro-government rally. His accompanying message was loud and clear: “While the fascists try to destabilize the country, we fight for peace and life.”

It was retweeted hundreds of times, apparently by many who thought it was current. But the photo, while indeed in Venezuela, was old. The website Latina Press managed to set the record straight, explaining that the giveaway was a building in the photo featuring a “Pepsi-Ball,” which was removed several years ago by the same mayor.