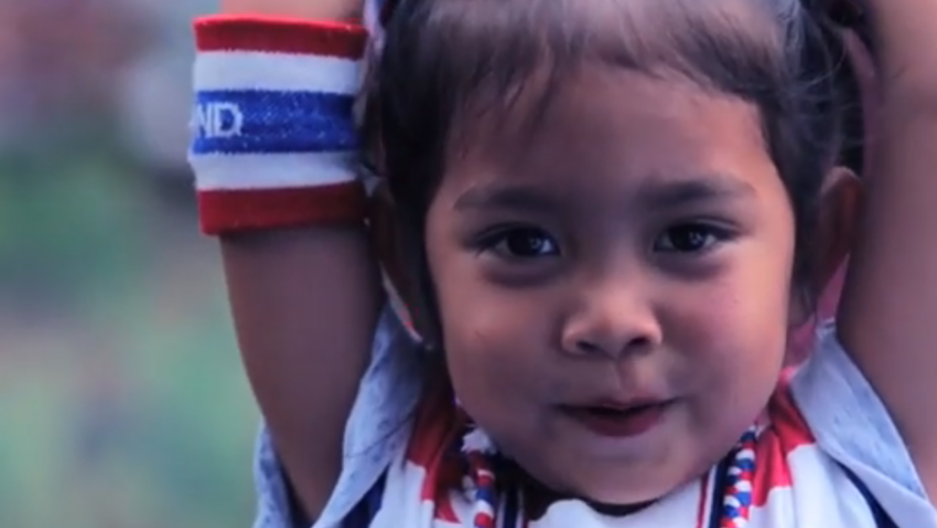 BANGKOK — It would seem to be an intuitive rule of parenting: Don’t bring your kids to an insurrection.

But in Bangkok, it is routinely broken.

Thailand’s ongoing crisis is veering towards a bloodier chapter. The three-month-old anti-government uprising is increasingly adopting elements of armed struggle. Aggressive tactics have in turn awakened mysterious resistance forces, who attack the protesters with grenades and assault rifles.

These urban encampments are places so threatened that the movement’s frontline guards frisk passersby for weapons, and patrol the perimeter in bulletproof vests.

In other words, Thailand’s uprising is clearly a terrible place for children. Yet kids are commonly found in them, waddling alongside their parents.

And that has taken a serious toll. The country is reeling from the deaths of four children in recent days. All were aged between four and six, and were killed by explosives. Other young children have been severely injured.

The violence brings the death toll from this self-proclaimed “people’s coup” to roughly 20. More than 700 have been injured since November.

The bombings have been roundly condemned by all sides. Prime Minister Yingluck Shinawatra, openly targeted for abduction by the uprising, called the attacks on her rivals “acts of terror for political benefit without regard for human life.” The uprising dubbed the attacks “attempted massacres” and promptly blamed them on the government.

“We’re asking all the forces to make sure that we protect those children from going into those violence-affected areas,” said Bijaya Rajbhandari, UNICEF’s Thailand representative. This is the responsibility, he said, of all sides: protesters and the government as well as parents.

Given the bloodshed and the uprising’s radical cause — forcing out an elected government to install a council of hand-picked wise leaders — observers may fail to understand why any parent would lead a child into a Bangkok protest zone.

Some parents expose their children unintentionally. The uprising has blockaded some of Bangkok’s key thoroughfares, busiest shopping malls and central train stations. For downtown dwellers, these locations can be hard to avoid.

Two children slain by a Feb. 23 grenade attack — a 4-year-old and a 6-year-old — were siblings walking past a Walmart-style superstore called Big C. Their father wasn’t taking his kids to wage a battle against the state. He wasn’t even a protester. They were simply out shopping in Bangkok.

In addition to being centrally located, the protest encampments don’t convey a round-the-clock menacing vibe.

Visitors might find a protest captain in a throat-searing screed against a “tyrannical government” run by “hell beasts.” They might just as well find a mediocre cover band struggling through “Kiss Me” by Sixpence None the Richer. Or given the way the mobs’ numbers have dwindled of late, they may encounter a deserted patch of asphalt.

For Thai parents, there appears to be little reason for vigilance.

When the uprising does explode into armed resistance, the participants aren’t the usual protesters — the urban, upper-class rank and file who fill out the crowds. Gun battles are fought instead by rough men allied to the uprising who spring forth with guns to fend off riot cops or rival political camps. These irregular toughs have also played a prominent role in sabotaging February elections that were seen as impeding the uprising’s dreams.

Despite the episodes of violence, the uprising (officially titled the People’s Democratic Reform Committee) does not in fact discourage children from attending rallies. Instead, it practically welcomes them. And it has not publicly agreed to UN requests to stop children from entering protest camps. (Key spokesmen did not respond to GlobalPost’s requests for comment.)

Protesters’ young kids are not just toted along but often kitted out in anti-government kitsch (namely scarves and headbands) and encouraged to cheer on the crusade. Following the bombings that killed several children, the uprising posted to its Facebook page a montage of kids singing its signature anthem: a entreaty to fight on and never retreat.

The movement’s leader, a veteran politician named Suthep Thaugsuban, frequently reads letters of encouragement sent in by children and even marches through Bangkok with kids at his side. The desired effect, it seems, is to project an air of innocence and convey a righteous struggle for the country’s future.

But Suthep’s rhetoric regarding the children of his enemies is less than righteous. He has repeatedly invoked a 10-year-old boy — Yingluck’s son, nicknamed “Pipe” — in his lacerating condemnations of the premier. His most recent tirade imagined an ominous future for the prime minister’s son.

“In the days ahead, your child will become an orphan and he will curse you,” Suthep said to raucous applause. The premier, he said, will soon be locked away and “your bastard son, Pipe, will surely be abandoned.” Uprising supporters have even visited the boy’s posh private school to intimidate him by blowing whistles.

The worst rhetoric from the uprising’s detractors is similarly dark. The leaders of a rival street faction sworn to defend the government, the Red Shirts, had to rein in a police officer at a recent rally after he ascended the stage to express joy at a mysterious attack that left six dead — including two five-year-old girls.