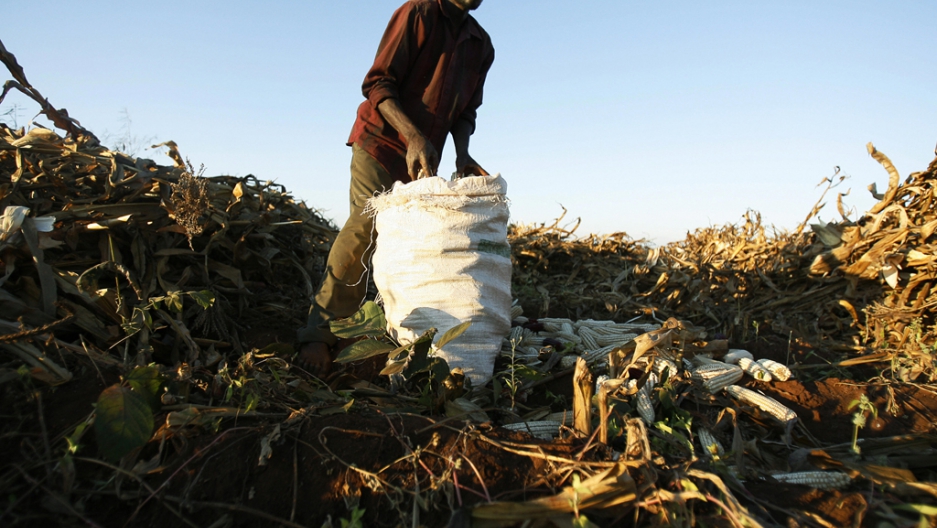 A Malawian land worker harvests maize in Masungo village on the outskirts of the capital Lilongwe.
Credit: Gianluigi Guercia
Share

LILONGWE, Malawi — Visit this small, landlocked country in late January and you will have a hard time believing its people often go hungry.

It is mid-rainy season, and in and around the capital city the landscape is lush and green.

Look more closely and you’ll notice that nearly every inch of unpaved space seems planted with maize (corn); the green stalks rise up to five feet above moist, rich soil. Outside of the city, along the road leading south toward the former colonial capital of Zomba, the hills roll with maize, not in vast tracts reminiscent of Iowa but in small, neatly bordered plots.

It certainly doesn’t seem like a land that cannot feed itself. But until recently, that is what Malawi has been.

Droughts often threaten the country’s one rainy season, and with per capita incomes at around $900 per year, hunger, and even starvation, stalk the countryside. The World Food Program has permanent offices here, and for good reason.

Even this season, when the rains have come strong but late, more than 10 percent of the country’s 16 million people face severe food insecurity. According to news reports, some have starved.

It is paradoxical only to outsiders that this greenest of seasons is also the hungriest. By planting time late in the year, many peasant farmers have consumed the last of their saved grain, even following a decent harvest like they had last year. Until the new crop comes in late March or April they have to rely on meager cash income to feed themselves and their families.

“We don’t have a food shortage,” said Billy Mayaya of the Malawi Right to Food Network. “We just have a maize shortage.”

The right to food movement has grown in tandem with Malawi’s fixation on maize. Both were sparked by the same deadly event, a famine in 2002-2003.

Between 1998 and 2001, the World Bank and International Monetary Fund recommended that the Malawi government cut spending. The government eliminated a small but effective program of seed and fertilizer distribution, and maize production fell 40 percent by 2002. The World Bank and IMF then persuaded the government to sell off its food reserves.

Sure enough, no sooner had emergency stocks been sold off in an unsurprising wave of corruption, than the rains failed. As many as 1,000 people died in the ensuing famine.

This humanitarian crisis prompted the government to resume its food reserves, critical in a landlocked country where emergency food aid can take 3 to 5 months to reach the hungry. And it ignored World Bank and IMF advice by establishing a broad input subsidy program intended to put good seeds and fertilizer into the hands of poor farmers.

The cash-strapped government had to launch the program with its own funds when international donors refused to support an initiative seen as inimical to free market principles.

This was true, for the simple reason that in this largely subsistence economy, the market was rife with failures. No investor was about to step in to improve small-scale farmers’ productivity. And there was no one else to produce food.

The program was a success, and within a few years Malawi had grown enough maize to export some to neighboring countries. Even most donors conceded that the program had worked.

The 2002 famine, as much a product of governance failure as it was crop failure, also sparked the Malawi Right to Food Network. A 2006 international fact-finding mission pinpointed the causes of the crisis, and activists set to work crafting Malawi’s Right to Food Bill. The bill enshrines in legislation every Malawian’s right to “the progressive realization of the right to food,” committing the government to advance such rights.

The right to food has gained traction in recent years as part of the broader recognition within the international community of economic, social, and cultural rights. Under the leadership of UN Special Rapporteur on the Right to Food, Olivier De Schutter, the concept has translated into national legislation and constitutional guarantees. In India, the Supreme Court found in favor of plaintiffs claiming their right to food had been violated by the elimination of key government programs.

For a country as vulnerable as Malawi, Mayaya says the movement made perfect sense.

De Schutter brought an official UN mission to Malawi last year, issuing a comprehensive report that praised the government for its efforts but faulted it for the overreliance on maize and chemical fertilizer, which he warned could be masking rather than replenishing depleted soils. The sentiment seems widely accepted both in and out of government, though the subsidies are so entrenched in the political structure that they would be hard to eliminate.

But they can be shifted. Current government efforts to distribute legumes seeds – for beans, pigeon peas, groundnuts, soybeans – along with maize are a start. They diversify diets, offer crops that ripen at different times of the year, and replenish the soil with nitrogen and organic matter. Ultimately, such programs can reduce Malawi’s heavy dependence on fertilizer imports, which consume an unsustainable share of scarce foreign exchange.

South of the capital, I saw plenty of legumes intercropped with maize. Farmers were enthusiastic, one telling me that thus far he had not needed chemical fertilizer on his one acre of maize, which stood tall above him.

I asked if the high-yield hybrid maize favored by donors and the government didn’t need those fertilizers. After all, modern hybrid seeds like those distributed in Malawi by Monsanto and other seed companies perform well only with the application of high levels of fertilizer.

The farmer smiled. This was a local variety, he told me, which he didn’t need to purchase every year. Specialists explained to me later that its yield isn’t as high as hybrid seeds under optimal conditions, but under the variable conditions farmers face, it does almost as well, even if fertilizer is scarce. It also tolerates erratic rainfall better and stores more reliably.

The farmer pointed to his healthy maize plants and told me proudly that he was growing “orange maize.” He said it’s high in Vitamin A, which I knew was chronically in deficit in developing countries. In fact, it’s the reason behind the long-promised, never-delivered “golden rice,” genetically modified to add Vitamin A.

This farmer may not have known it, but he was rejecting the kind of high-tech agriculture heavily promoted by international donors. He was rebuilding the fertility of his depleted soils by intercropping nutritious legumes while growing a vitamin-rich, resilient variety of maize. At the same time, he had reduced his costs — he saved seeds, and didn’t need to buy fertilizer — and reduced Malawi’s need to import fertilizer.

Maybe this is what the progressive realization of the right to food will look like in Malawi.

More from GlobalPost: Why it's dangerous to trust corporations to lead the fight against world hunger

Timothy A. Wise is the Policy Research Director at Tufts University’s Global Development and Environment Institute (GDAE). He is currently on an Open Society Institute Fellowship researching agriculture, climate change and the right to food through a project called "A Rights-based Approach to the Global Food Crisis."