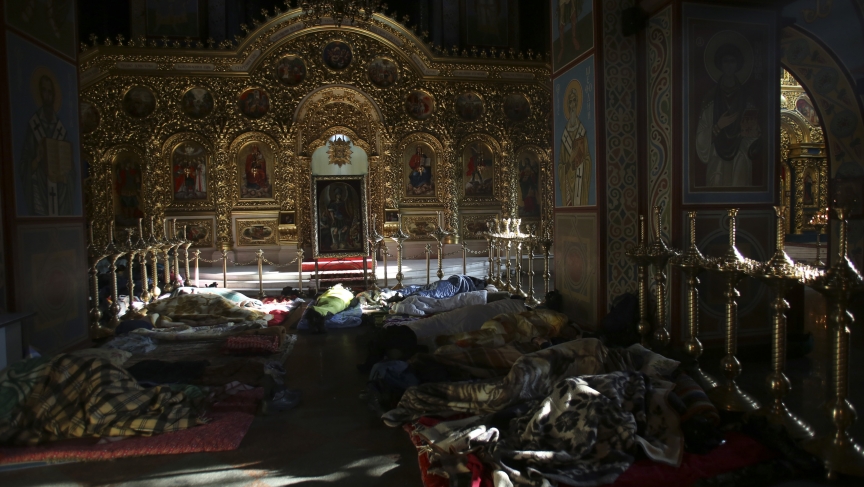 Residents of Kiev are jittery, just days after Ukraine's protests reached their peek and President Viktor Yanukovych fled the capital.

"People are much more peaceful now, but the mood is very somber. Nobody is happy, and nobody is full of joy with the victory because nobody is sure this is the victory which will end the problems," Kurkov says.

Ukraine's interim President Olexander Turchynov has admitted he's worried about separatism. That's not too surprising, given opposition to his role in Ukraine's Russian-speaking regions. Adding to those worries, one of Mr Yanukovych's former aides, Andriy Kliuyev, has reportedly been shot and wounded.

One of the pivotal moments in the demonstrations happened at Kiev's Michailovsky Monastery. It was a refuge for protestors when riot police chased demonstrators up a Kiev hill on November 29.

"The monk ... opened the gates of the monastery and let everyone in, then closed it, and then went up to the belfry and started ringing the bells. And the people from Kiev, from around the area, started coming.  And from this moment this church became a symbol also of the uprising,  And it's still helping a lot people from Maidan. They're walking in with their helmets, with long wooden clubs, and they leave their clubs or the weapons outside the monastery gate and outside the entrance to the main church, and it's still going on," he says.

But he says the scene outside other Kiev buildings today is troubling.

"Today when I was taking my kids to the schooI, I was passing by the headquarters of security service, which is a huge building — Stalin's color gray and Stalin's architecture. And in front of the main gate there were five or six masked protestors also with clubs and in bullet-proof vests. The head of [the Secret Service of Ukraine] along with nine of his deputies fled. But the people are still working there. Nobody knows actually what is happening. At the moment, there is a new head, but no information except that of course the secret service was also involved in different operations against the protestors," Kurkov says.

But some parts of Kiev, he says, have found a sort of calm.

"Finally we have police on the streets, sometimes accompanied by the representatives of the self-defense groups from the protestors. There is some kind of strange order now — some of the barricades are removed.  But ... people are staying there probably until the 25th of May — the day of presidential elections, maybe even longer because normally we never have a president in one round of elections."

But Kurkov says the relative peace in Kiev masks turmoil elsewhere in Ukraine.

"I'm wary because in the Crimea, the situation is very tense. In the east of the country there are still fights between pro-European protestors and those who are not really pro-Russian, but anti-European, anti-western," he says.

Efforts to form a unity government for Ukraine have been postponed, at least until Thursday.