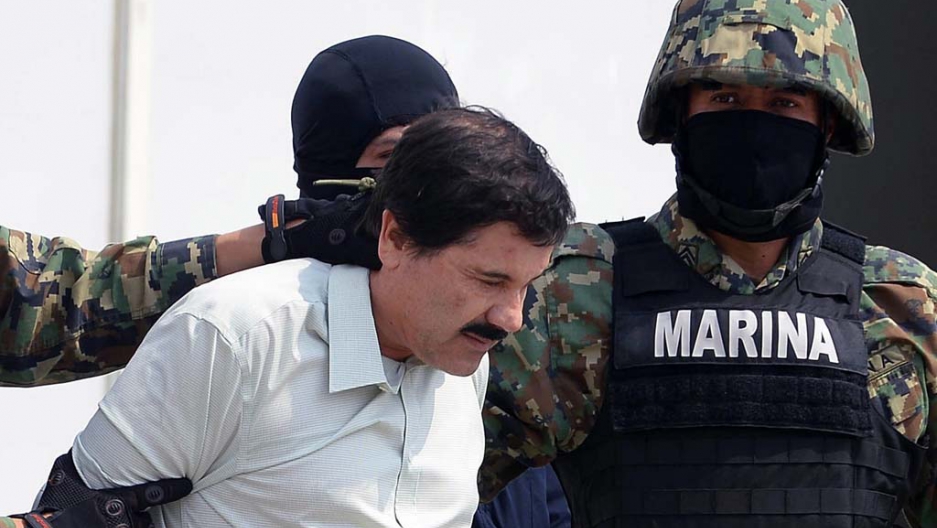 MEXICO CITY — With cartel kingpin Joaquin “El Chapo” Guzman back behind bars, Mexican President Enrique Peña Nieto must decide what to do with his prize, as communities and gunmen the mega-gangster controlled brace for a bloody backlash.

Will Peña Nieto opt to judge and imprison Guzman in Mexico or approve the extradition requests being drawn up by US prosecutors? Will he risk violent underworld chaos by further dismantling the crime empire Guzman built?

What will Mexican officials do with any names Guzman provides of politicians and security force chiefs assumed to have been protecting him?

“They’ve grabbed a tiger by the tail,” says US political scientist John Bailey, an expert on Mexican politics and organized crime. “Now what are they going to do with it?”

El Chapo, meaning “shorty,” was Mexico’s most wanted man. His influence reaches throughout the Americas and into Europe and Asia.

The US Drug Enforcement Administration and a number of federal grand juries want him on drug and organized crime charges as well. Chicago declared Guzman Public Enemy No. 1.

For more than a decade, he’s headed the so-called Sinaloa Cartel, considered Mexico’s most powerful criminal organization. The gang has trafficked a huge share of the cocaine, marijuana and other illicit drugs reaching US consumers.

Sinaloa battles with rival gangs and government forces have provoked much of the hyper-violence that’s left 100,000 Mexicans dead or missing in the past seven years.

Guzman is famous for being protected by scores of gunmen. But when Mexican marines snatched him near dawn Saturday from a fourth-floor condo in the Pacific resort of Mazatlan, they only had to subdue one bodyguard, Mexican authorities said. Guzman, who was with his wife and their toddler twin daughters, made no effort to grab his bedside assault rifle. Not a shot was fired.

A Mexican judge filed organized crime charges against Guzman on Monday, beginning what’s expected to be a lengthy legal process. Most experts don’t believe he’ll be extradited, at least not before serving time in Mexican prison.

Some analysts have hailed Guzman’s arrest as the most significant blow to global drug trafficking since the 1993 killing of crime lord Pablo Escobar by Colombian police.

More from GlobalPost: How Mexico's west was won — it takes a village, and plenty of AKs

Yet Escobar’s death fractured but didn’t destroy the cocaine industry he had dominated. Neither will Mexico’s narcotics trade unravel with Guzman’s return to prison.

The arrest or death of other Mexican kingpins in recent years set off bloody fighting among their underlings and rivals. The same might be expected from Guzman’s turn of fortune.

He had tightly controlled his far-flung empire and dealt harshly with employees and enemies alike, says Mike Vigil, a retired senior international operations agent for the DEA.

“They become like wounded animals on the tundra,” Vigil says of gangs that lose their leaders. “All of a sudden you have these predators who move in.”

Analysts suspect that Guzman allies Ismael Zambada and Juan Jose Esparragoza will be able to take over for him, at least in the short term.

But Zambada is a 66-year-old great-grandfather. His own organization has been weakened by the arrests or killings of key underlings, including two sons and a brother now in US custody.

Esparragoza is considered the weakest of the three, reportedly in semi-retirement, says Alejandro Hope, a former organized crime analyst for Mexico’s equivalent of the CIA.

Criminal empires like Guzman’s thrive only in the embrace of official corruption. Their protection networks string from town mayors and police chiefs through governors, military commanders and top federal officials.

Guzman presumably can finger a number of his paid benefactors. Whether he will — and what the government will do if he does — remains to be seen.

“There have got to be a lot of high-level people who were protecting him,” Bailey says. “The question is what are they going to do with that list? Until they really go after the political networks nothing is going to change.”

In the past decade only one former governor, Mario Villanueva of Quintana Roo, which includes Cancun, has been convicted of underworld connections. US efforts to prosecute the former governor of another state have been thwarted by his disappearance.

Guzman escaped from a maximum-security prison in January 2001, just five weeks after former President Vicente Fox took office. In the 13 years since, El Chapo’s rivals and many other Mexicans have alleged that the drug lord was protected by Fox and his successor, fellow conservative Felipe Calderon.

“Just a few fools say that,” former President Fox told Milenio newspaper on Monday about speculation that his government allowed Guzman to escape. “Same as Calderon, we were looking to recapture him and it wasn’t until now that he let down his guard.”

Recent US trials of other Mexican gangsters have exposed the workings of the cartels and their relations with the authorities.

So officials might have practical as well as prideful reasons to keep Guzman at home, analyst Hope said.

Hope added, “He can be the best informant of all time.”