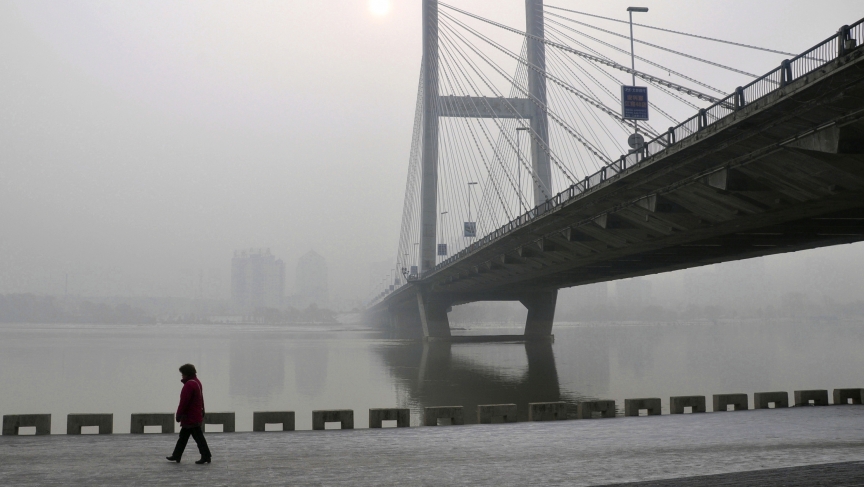 A resident walks along a street on the banks of the Songhua River near a highway bridge on a hazy day in Jilin, Jilin province, on February 25, 2014. China has sent teams of investigators to parts of the country worst hit by air pollution as part of efforts to stop the heavy smog engulfing about 15 percent of the country.

A Chinese state-run newspaper reports that a man living in a city in the north of China has filed a lawsuit against the government for failing to cut down on air pollution.

Li Guixin lives in Shijiazhuang, capital of Hebei province. He has asked the district court to force the Shijiazhuang Municipal Environmental Protection Bureau to control the city's air pollution. It’s not yet known if the court will pursue his complaint. Li Guixin says his health is under threat from the level of smog in his city, which has at times forced him to wear a face mask, use an air purifier and exercise indoors on a treadmill, according to the Israeli newspaper Haaratz.

More than a dozen Chinese cities are enduring record levels of smog right now. Chinese officials recently compared the current situation to "nuclear winter" — raising concerns that the current level of pollution would endanger the country's food supply, according to a report in The Guardian.

French photographer Roman Veillon has a thing about abandoned buildings. “It’s like they’re frozen in time. You can see and smell what people used to do there 10, 20, 30, or even 40 years ago. There is a unique atmosphere in these places.” he says.

A few years ago, he saw a picture of Kolmanskop, a defunct German diamond mining settlement in the Namibian desert, in National Geographic magazine. “I was haunted by that photograph, and I wanted to go myself,” Veillon said. But those types of trips aren’t cheap, and he wanted to do his subject justice. So he spent time researching the history of the town — which was started by a single German, a worker named Zacharias Lewala, who in 1908 accidentally found a diamond, starting an onslaught of German fortune hunters. Clark Boyd reports for PRI’s The World.

Just a day after President Yoweri Museveni signed into law a draconian bill allowing gay people convicted of homosexuality to be jailed for life, a Ugandan tabloid newspaper has published a list of the country's 200 “most prominent homosexuals.” Included on the list are Ugandans who have not made public statements regarding their sexuality, as well as well-known activists. US officials have condemned the new law, with Secretary of State John Kerry saying he would consider reducing aid to Uganda.

One activist, speaking anonymously to the Associated Press, said many of the people named feared violence and were considering leaving the country. In 2011, a different tabloid newspaper published a list of gay people and called for them to be executed. The prominent Ugandan gay activist David Kato was murdered shortly after. Those who knew him believe he was targeted because of his activist work.

Giving birth in the African nation of Malawi is a dangerous affair, for both mother and child. It has one of the highest rates of maternal mortality in the world. Chief Kwataine, the headman in the district of Ntcheu, says the situation in his part of the country was particularly bad when he became chief a decade ago. He believed that a culture of secrecy surrounding sexual matters, including birth and pregnancy, was to blame.

Expectant mothers often avoided speaking to doctors or nurses, and even feared that revealing their pregnancies might expose them to witchcraft. So Chief Kwataine came up with an idea — linking up pregnant women with “secret mothers” — trusted female villager elders elected by their communities, who keep tabs on women who are expecting babies in their villages. Anders Kelto reports for PRI’s The World.

There will be a crackdown on the use of English in Quebec, according to the minster responsible for Quebec’s French language, if the Parti Québécois retains a majority in the forthcoming provincial election. She cited examples, such as the trend amongst retailers to greet customers with “Bonjour-Hi,” to illustrate the growing use of bilingualism. Elections are due to be held in April, and the party is expected to win a majority, according to the National Post. But not everyone supports the party’s aims. Yves-Thomas Dorval, present of the employers’ council, warned against burdening businesses with excessive regulations.

There's been no measurable rain in Singapore since Jan. 12, one of the longest stretches of dry weather in the city's history. Things aren't much better in Thailand or Malaysia. All that dryness is leading to water shortages and endangering crops — and there's no end in sight. If something doesn't change, AccuWeather reports, hundreds of thousands of people could see their drinking water supplies run out in the very near future. 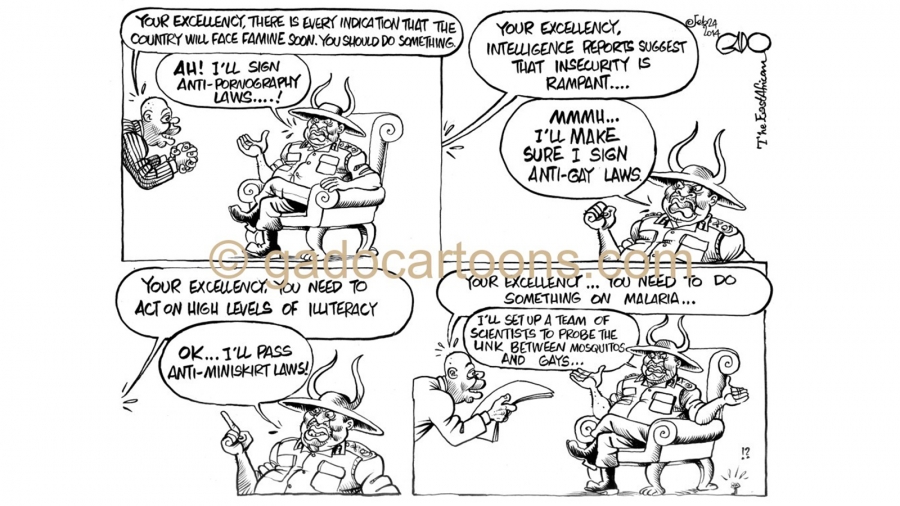 Tanzanian-born cartoonist Gado comments on Ugandan President Yoweri Museveni's easy answers for solving his country's biggest problems. Museveni signed an anti-gay bill on Monday, saying it was necessary because the west was promoting homosexuality in Africa. He also said "arrogant and careless Western groups" were trying to recruit Ugandan children into homosexuality, but he didn't name these purported groups.