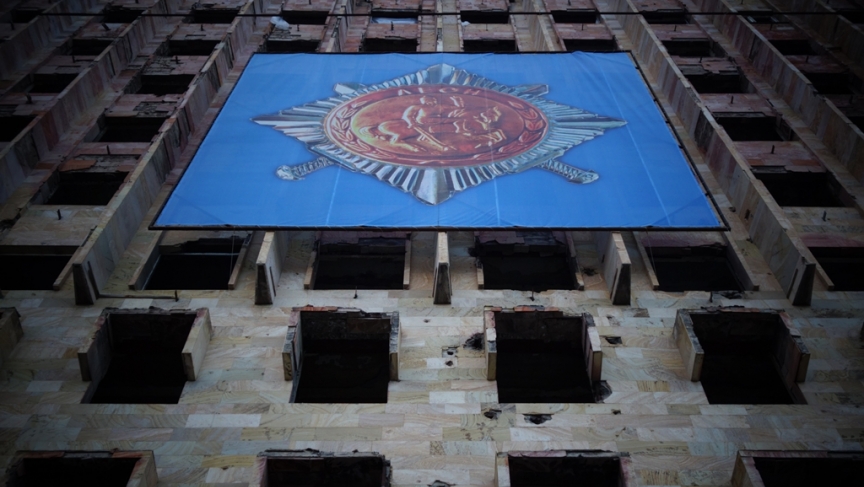 The Soviet-era central government complex in Sukhumi was nearly destroyed during the destructive 1992-93 war of secession that killed more than 20,000 people and forced more than 200,000 ethnic Georgians from their homes.

The world's attention, for the past month, has been on Sochi, host of the 2014 Winter Games. The games were meant to showcase Russia's technological and cultural advancement since the collapse of the Soviet Union.

But within sight of the bright lights of Sochi, just to the south, lies tiny Abkhazia, a breakaway province of the country of Georgia. When the USSR collapsed, Abkhazia became a province of newly independent Georgia. Soon after, ethnic Abkhaz began demanding autonomy, and an eventual civil war left 20,000 dead and displaced more than 200,000 ethnic Georgians.

Today Abkhazia remains in limbo. Mostly unrecognized as an independent state, — its largest benefactor, Russia, and fewer than a dozen others recognize it — it was not invited to the Olympic party. And the Olympics are putting a crimp in even everyday activities in Abkhazia. The border between Abkhazia and Russia been sealed to traffic — except for vital goods with a special permit. All trains have been canceled to and from Russia.

Towering over the Abkhazian capital city, Sukhumi, is the former Soviet-era administration complex. From the top of the 12-story, burned-out shell of a building, you can see the Black Sea coast, long a top resort area for elites. These vacation towns are about the same distance from the Olympic ski slopes in Russia as Sochi. Locals had hoped people attending the games might stay in Abkhazia.

But it wasn’t to be.

Near the border, a cafe owner named Gunda points to a pair of women at a nearby table who normally shuttle goods back and forth to Russia.

“Look at these women," she said. "They left their families very far from here and are living in someone else's house so they can work on the border. They're the breadwinners. And now there's no work.”

The women nodded in agreement, but were quick to affirm their allegiance to the Russian Federation. Not only are they allowed to work across the border, but they also get a pension from the Russian government. Which is why, they said, they support Russian athletes at Sochi.

They can’t actually root for an Abkhazian team because Abkhazia isn’t recognized by the International Olympic Committee.

Dzharnaz Benia, Abkhazia’s head wrestling coach, would like to see that changed.

Wrestling is big here, and Benia has coached some world-class athletes, but almost always under the Russian flag.

“My wish is that the international community would recognize Abkhazia so it could participate in the summer Olympics,” he said. “For many coaches and athletes, this is their dream.”

But that may take a while.

Abkhaz officials praise Russia for supporting them, both financially and militarily. Russia has deployed thousands of troops in Abkhazia — ostensibly to protect the country from invasion.

Georgia considers this a military occupation of its territory, and believes Abkhaz authorities are mere puppets of the Kremlin. This month, Georgian officials called on Olympic visitors to stay away from Abkhazian resorts, and vowed that Georgia would never give up the territory.

Abkhazians ask the world for recognition as an independent state, while Georgia’s government says that will never happen and demands Russia stop propping up what they see as a rogue regime. So the stalemate continues.

In the meantime, Abkhazia’s people are missing out on Sochi’s $51 billion dollar Olympic party just up the road.