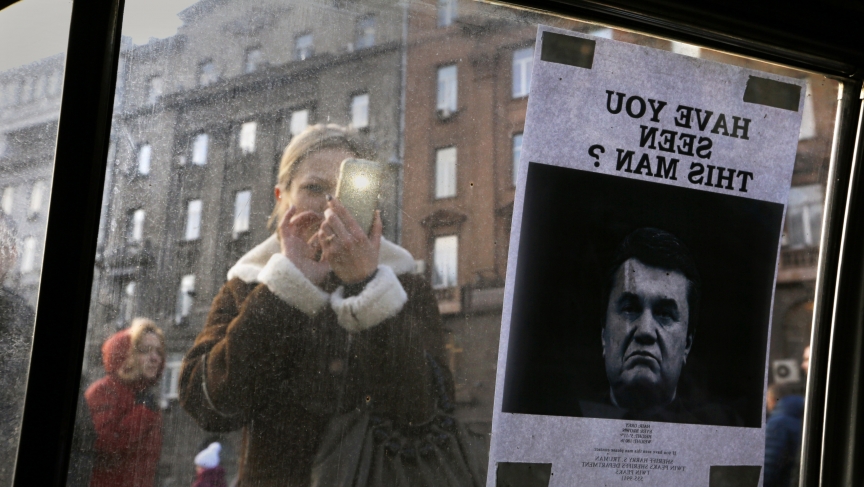 A woman takes photos of a "Wanted" notice for fugitive Ukrainian President Victor Yanukovych. This one was plastered on the window of a car used as a barricade near Kiev's Independence Square February 24, 2014.

Viktor Yanukovych is the latest addition to the global list of petty corrupt dictators tossed out of power by popular protests.

But up until recently, a fair-minded biography of the 63-year-old Ukrainian might have described Yanukovych as a political survivor.

Things did not have to turn out this way, according to Alexander Motyl, an expert on Ukraine and Russia and professor of political science at Rutgers University. Motyl spoke with me on Monday morning and the following is a lightly edited transcript.

Where did things start to go wrong for Viktor Yanukovych?

Almost immediately after his election in March 2010, he was riding on a wave of popularity. He won [an election] generally considered to be fair and free, and there was enormous disillusionment with the Orange government that had preceded [Yanukovych's] coming to power.

He could have easily made himself the president of all the people by appointing a cabinet that would have consisted of individuals from the opposition, as well as his own Party of Regions and others. Instead, he chose to appoint hardliners from within his own party to positions of authority.

So, very quickly, within a few weeks of becoming president, he sent out a very clear signal that this was not going to be a government of national reconciliation and that the people who had originally been in the Orange camp, and voted for him, would be disappointed. That was unnecessary, at least theoretically unnecessary.

The next big mistake he made was in April of that year, when he signed a deal in Kharkiv with Russia, in which he acquired very ephemeral concessions regarding the gas price in exchange for a very long extension of the lease on the Black Sea fleet — Russia's fleet — in Sevastopol, part of the Crimea. That [agreement] was criticized for just being a bad deal. [Yanukovych] was criticized for essentially giving away the store, and letting Russia control the Crimea.

I think his third blunder — and this is all, mind you, within the first few months of his coming to power — came in October, when, in a pretty shady fashion, [Yanukovych] changed the constitution and arrogated to himself enormous powers. He essentially came to become what was known as a "super president." That was seen with alarm by people with democratic inclinations. But it was also a major mistake because he then became responsible for the entire country.

Had he been a genius, a statesman like Bismark or something like that, he might have been able to pull it off. Possibly. But Yanukovych is not a statesman. He has no experience. He's pretty much a teenage hooligan who happened to survive and make it to the top. The result of that was a series of enormous mistakes — politically, socially, culturally — which proceeded to alienate a large portion of the Ukrainian population.

But is the "teenage hooligan" label not too harsh for someone who was democratically elected?

Frankly, not. Because winning a democratic election is not a mandate to engage in embezzlement and theft. It's an obligation to serve the people.

As a matter of fact, in his presidential oath, he explicitly said he would serve the people, promote their prosperity, and all these sorts of things. Instead, what he did, almost from the get-go, was use the office as a means of enrichment for himself, for his immediate family and then the so-called "Family." It consisted of 5, 10 or 15 of his closest cronies. These people, according to estimates, embezzled something like $10 to $15 billion in the three and a half or so years that they were in power. It's simply astounding.

So, when one considers that Yanukovych was insisting that the European Union give him $15 billion back in November of 2013 as a prelude to the Association Agreement, it could have easily been made up if he had gone to his bank accounts and withdrawn the money that he had purloined.

That was a key moment for the downfall of Yanukovych. What was the final straw?

It was quite simply Yanukovych going back on the deal to sign the [EU] Association Agreement and the deep and comprehensive free trade agreement with the European Union.

The problem for him was that he set himself up. For about a year and a half, he and his ministers were stating that this was a done deal, that they were committed to European integration. And there was significant support from the [Ukrainian] public. Even people who were wavering about Europe eventually came on board.

After all, the president and his government were promoting the deal, so why shouldn't they? So, by the time the moment came when the agreement was supposed to be signed, the consensus among Ukrainians was that [Yanukovych's government] would indeed sign and that this represented not so much an opportunity for economic reform, but they saw this as a "civilizational choice." That's the terminology that was used.

Namely, this was finally a choice that was being made by Ukraine to join Europe. And that means joining the world and kind of being like everybody else in the democratic and capitalist world. When Yanukovych went back on his own promises, that just led people to go out onto the streets. And, you will recall, there were mass demonstrations and many were 500,000 and more people in downtown Kiev. And they were simply insisting at the beginning that Ukraine just sign the agreement.

Last April, I was at a luncheon with [Ukraine's] minister of foreign affairs and I asked him, "Will the Association Agreement be signed?" And his response was, and I'm quoting, "We will sign it. I'm not sure about the Europeans, but we will sign it." And as it turned out, they didn't. But the Europeans wanted to.

What is the legacy of Viktor Yanukovych going to be in the long run?

He will be considered one of the villains of Ukrainian history. There is no question about that.

And in terms of objective evaluations of what he did for the country, I think [experts] will view these last four years as something in the nature of an institutional disaster, almost like an atom bomb that fell and destroyed the economic, political, and cultural institutions of the country.

His legacy will be as dark as one can possibly imagine. There is a silver lining in this particular cloud, at least in terms of Ukraine. One of the consequences of this institutional ruin that Yanukovych imposed upon the country is that he has essentially presented Ukrainian democrats with only one way out. That is to say, they have no choice but to rebuild from scratch, which is arguably not a bad way to rebuild. It's easier than having to renovate malfunctioning institutions. And at the same time, it's clear to them that they have no choice but to embark on democracy, the free market, and the rule of law. There is no alternative.

For the last 20 or so years, Ukrainian leaders have always been waffling. They wanted a bit of the Soviet past, a bit of the West, a bit of Russia, a bit of this and a bit of that, and they have been muddling through. Mudding through has effectively become impossible. It means essentially, losing the country.

In that sense, the destructiveness of Yanukovych has done the democrats a favor.