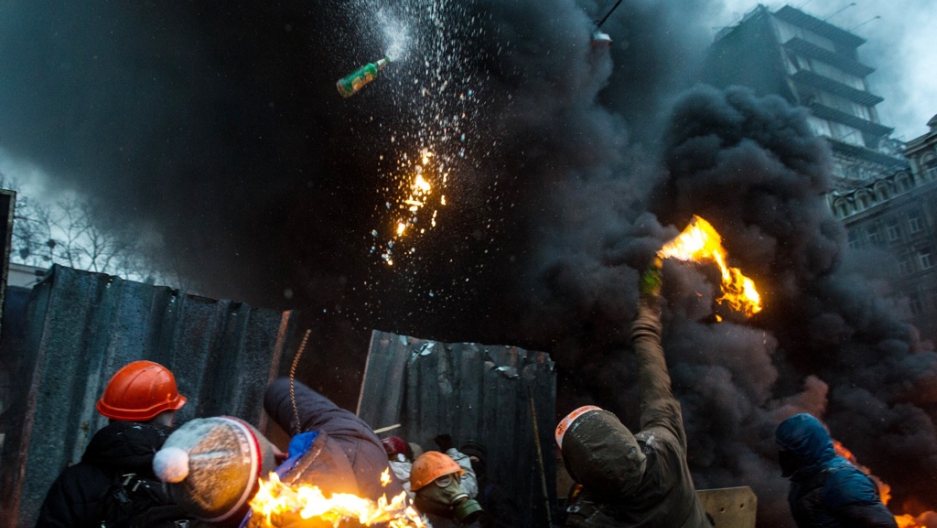 BUZZARDS BAY, Mass. — The images have been burned into the world’s consciousness: a huge square filled with protesters; black smoke billowing over a beautiful and historical city. Bodies are rushed by on stretchers, angry voices are raised. A man with his feet on fire dances madly around before someone shoves him to the ground to smother the flames.

Whatever else the recent events in Ukraine may ultimately bring in their wake, they certainly were telegenic.

But, as journalist Bob Garfield remarked on his National Public Radio show “On the Media” this weekend, that may have been part of the problem.

“While insurrection makes for great TV, complexity does not,” the veteran reporter said. “American news mostly defaulted to Cold War mode, characterizing the upheaval as a confrontation of East and West.”

This, in turn, led to a “simplistic narrative” full of “die-cut stereotypes,” which largely obscured the true nature of the violent drama taking place on the streets of Kyiv.

The result, according to renowned Russia expert Stephen Cohen, is not just foolish, it is dangerous.

The conflict in Ukraine is not a clear-cut standoff between those thirsting for democracy and those who prefer a thuggish autocracy, he insists. Rather, it is a far more explosive mix of regional, ethnic, even linguistic tensions that could force Ukraine to break apart.

And if that happens — watch out.

“Ukraine is not one country … historically, ethnically, religiously, culturally, politically, economically, it’s two countries. One half wants to stay close to Russia; the other wants to go West … The longer-term outcome may be … the emergence of a new Cold War divide between West and East … right on the borders of Russia, right through the heart of Slavic civilization. And if that happens, it’s permanent instability and permanent potential for real war for decades to come.”

The ouster of an admittedly nasty, albeit democratically elected president is not necessarily a triumph of democracy, Cohen says.

More from GlobalPost: 'It's easy to be a part of revolution.' But what happens next? (VIDEO)

The opposition who organized the resistance to the government of Viktor Yanukovych is not a monolithic entity composed of visionary democrats. It is a fractured and fractious body that contains ultra-nationalist groups like the Svoboda (Freedom) Party. That party is headed by the rather unappetizing Oleh Tyanhybok, who liked to disparage the former government as the “Jewish-Russian mafia” and who has publicly referred to Jews as “scum.”

Yulia Tymoshenko, with her iconic braids and angelic demeanor, captured attention when she spoke at Maidan, the protest site in Kyiv, shortly after her release from a prison hospital on Saturday.

Her incarceration was widely seen as politically motivated, which does not change the fact that Tymoshenko was just as widely suspected of corruption — and was named in a US indictment of former Ukrainian Prime Minister Pavlo Lazarenko, for giving hefty bribes in exchange for favorable business deals.

So it’s not exactly the Founding Fathers who will be trying to form a national unity government over the next few days.

Blame for the violence in Kyiv has been laid squarely at the central government’s feet, but the true villain, according to the new cold war scenario, is Russian President Vladimir Putin. It was his refusal to let Ukraine sign a trade deal with the European Union last November that started the whole mess.

Many analysts disparage this point of view as fairly myopic. Yes, Putin put pressure on Yanukovych to stay closer to Moscow, but he also offered what Ukraine needed most at the time — cold, hard cash.

“Under the terms of the European Union offer of last year … the EU was offering $160 million per year for the next five years while the bond repayments to the International Monetary Fund alone were greater than that amount,” wrote Ben Aris, editor of Business New Europe magazine. “In contrast, Russia offered $15 billion in cash and immediately paid $3 billion.”

The EU deal also mandated certain trade restrictions that would have hindered the development of Ukraine’s fragile economy. “Had Yanukovych accepted the EU deal, the country would have collapsed,” Aris insists.

Putin at the time suggested talks on a tripartite arrangement, which would have given Ukraine the opportunity to get closer to Europe without exiting the Kremlin’s proposed “Eurasia Union,” but the EU insisted on an all-or-nothing approach.

Washington also comes in for a share of the blame, Cohen says.

The now-famous “F--- the European Union” phone call, in which apparently Assistant Secretary of State for European and Eurasian Affairs Victoria Nuland discusses the future of Ukraine with US Ambassador to Kyiv Geoffrey Pyatt, exposes the White House interest in the goings-on in Ukraine.

The truly sensational part of that conversation was not the expletive, but the ease with which two US officials plot the future government of a country far from its shores and sphere of influence.

“I think Yats is the guy who's got the economic experience, the governing experience,” Nuland continues. “He's the ... what he needs is Klitsch and Tyahnybok on the outside.”

“Yats” is Aresny Yatsenyuk, head of the Fatherland Party and a close associate of Tymoshenko. It’s unclear which of them will take the top spot now that the former prime minister is out of prison.

More from GlobalPost: 26 things found at Yanukovych's residence that make him look even worse

Tyahnybok is, as mentioned above, the ultra-right head of the Svoboda Party.

“The highest-ranking State Department official, who presumably represents the Obama administration, and the American ambassador in Kyiv are, to put it in blunt terms, plotting a coup d’état against the elected president of Ukraine,” Cohen said.

Cohen’s thesis is by no means universally accepted. He was taken to task by Fox News commentators Charles Krauthammer and Bill O’Reilly, who called him a “leftie” who defends Putin’s “thuggishness” just because he “likes the US even less than [he] likes Putin.”

More seriously, another renowned Russia expert, Timothy Snyder of Yale, wrote in an upcoming issue of the New York Review of Books that the concern over ultra-nationalists in Ukraine is overstated.

There’s little time for such theoretical discussions at present: The world is still gawping at golden showerheads and personalized vodka at Yanukovych’s presidential palace.

The future of Ukraine’s “revolution” is still in doubt. In the immortal word of Zhou Enlai, supposedly talking of a similar contretemps in France a couple of centuries ago, “It’s too soon to tell.”

Check back in a few hundred years.

Jean MacKenzie worked as a journalist in Russia and other parts of the former Soviet Union for more than a decade. Her work has appeared in The Boston Globe, the Christian Science Monitor, Newsday and many other publications.