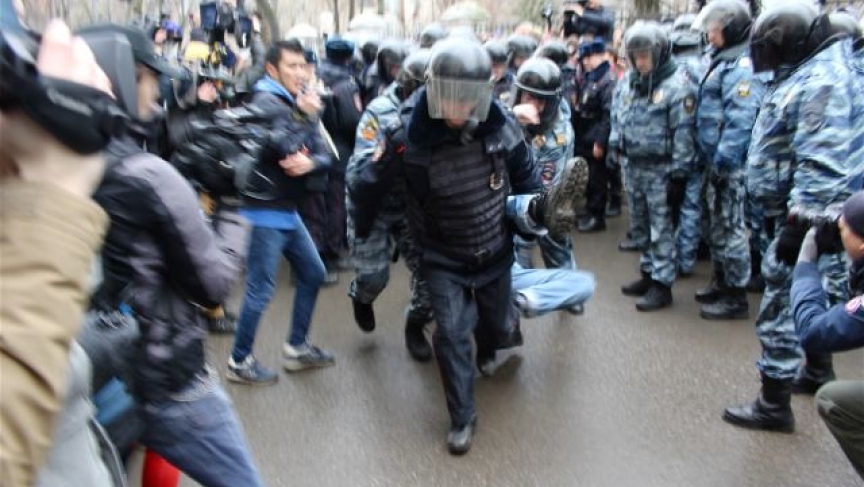 Russian OMON security forces detained dozens outside a Moscow courthouse, where anti-Putin protestors were sentenced to up to four years in prison.

If there were suggestions of a political thaw during Russia's Sochi Olympics, Monday’s verdict in a Moscow courtroom seemed to show those hopes were illusory at best.

A Russian judge sentenced eight protesters for rioting and attacking police during a demonstration against Vladimir Putin's inauguration for a third term in May 2012.

The case is being seen by many as a litmus test for Russia’s tolerance of dissent, particularly following the dramatic events in neighboring Ukraine.

Judge Natalia Nikishina read through the proceedings for four hours before sentencing the activists to up to four years in prison. All the defendents had denied that they attacked police, saying they merely intervened to prevent security forces from beating protesters.

The proceedings had dragged on for more than a year. According to Vyacheslav Makarov, one of the defense lawyers, the defendants did not receive a fair trial.

“Our arguments weren't included in the verdict,” Makarov says. “They weren't voiced or rebutted. The verdict did not reflect them."

The Kremlin’s tolerance for dissent seemed to be on short supply outside the courtoom. Russian OMON security forces rushed into a crowd of more than 1,000 protesters, arresting scores of people, sometimes at random and sometimes not.

Pussy Riot members Nadya Tolokolnikova and Maria Alyokhina were both detained, as was a man in a chicken costume.

“We're too few here,” says Lev Rubinstein, a Russian writer active in the protest movement, who was at the scene. “If they have enough buses to take us all away, they win — temporarily. I still think we're moving in the right direction, but slowly.”

Just a few years ago, Russia’s opposition movement looked to be on the ascent. Following flawed parliamentary elections in December 2011, tens of thousands of Russians took to the streets in protests that were largely peaceful.

But with Putin returning to the presidency in May 2012, a protest against his inauguration turned violent. The Kremlin quickly imposed new restrictions on public gatherings and several dozen activists were arrested in what became known as the Bolotnaya Affair.

The opposition has never recovered.

Andrey Mironov, a former dissident who spent time in prison in the Soviet Union, says the only hope for Russia’s beleaguered opposition movement now is the success of post-revolutionary Ukraine.

“I hope that people in Europe and America understand that the best way to help democracy in Russia is to help Ukraine,” Mironov says.

The events in Kiev were clearly on the minds of many outside the Moscow courtroom. One man held up a sign that read “Maidan” (Ukraine’s Independence Square), as protesters cheered him on.

Still, Alexey Navalny, the anti-corruption blogger who emerged as a leader of Russia's opposition movement, urged Russians to avoid seeking parallels with Ukraine.

"Maidan is not important here,” Navalny said. “Maidan was in another country, citizens of another country were fighting for their freedom. The question is now, for us, whether we are ready to fight for our freedom."

But Navalny would have to fight for that freedom another day.   Soon, he, too, was arrested.