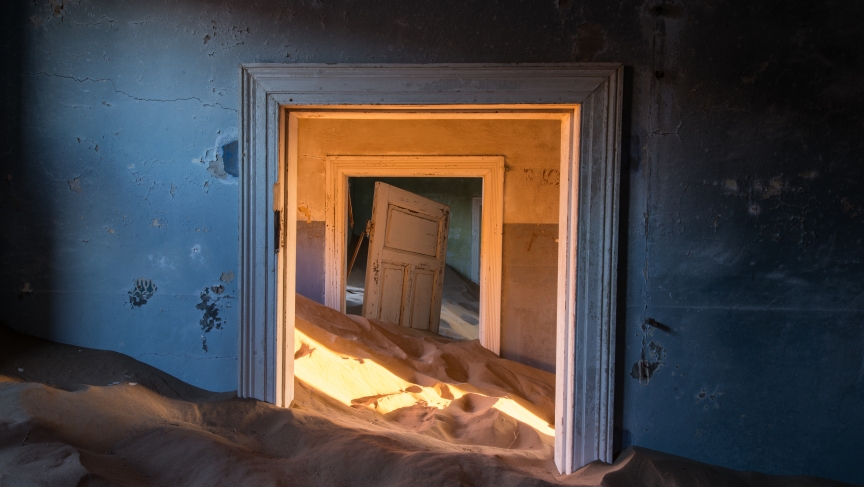 Kolmanskop: a German ghost town in the Namibian desert.

“I always liked abandoned buildings; it's like they’re frozen in time,” says French photographer Romain Veillon. “You can see and smell what people used to do there ten, 20, 30, or even 40 years ago. There is a unique atmosphere in these places.”

As a child, Veillon explains, he enjoyed exploring the empty castle near his elementary school, and the old warehouse used by his grandparents' trucking company.

It started out as exploration, but as he got older, he wanted to capture that frozen-in-time atmosphere, to turn it into art using photography.

To be honest, it's hardly a coincidence that I contacted Veillon.

Over the past year and half, I've clocked in on a number of stories involving once thriving communities that humanity, for whatever reason, left behind. Utterly. These are places where the past can be heard, seen and felt among the ruins.

First, there was Hashima Island in Japan, which was abandoned when the coal ran out, and then was revived in the latest James Bond film as the villain’s secret lair.

Then, there was Piramida, an eerie old Russian mining settlement above the Arctic Circle that now sits almost empty. It was here that a Danish band called Efterklang found musical ideas and themes for their latest album.

And now there is Veillon and his trek to capture images of a defunct German diamond mining settlement called Kolmanskop, awash with sand and ghosts in the middle of the Namibian desert.

Veillon’s quest started a few years ago, when he saw a picture of Kolmanskop in National Geographic magazine.

“I was haunted by that photograph, and I wanted to go myself,” he says. But trips to Namibia aren’t cheap for a freelance photographer, and Veillon intended to do it right. He wanted to spend enough time in Kolmanskop to get the pictures just the way he wanted them.

So, he saved his money and started doing research.

Kolmanskop’s past is laced with the kind of legends that rival those of gold rush towns in the American West.

The story goes that the town was “founded” by a single German, a worker named Zacharias Lewala, in 1908. At the time, Namibia wasn’t Namibia. It was a German colony called German South-West Africa.

The spot where Lewala got lucky was just a few miles inland from a town called Luederitz. He was working in the area, and stumbled across a diamond.

It wasn’t long before the rush was on. German miners began pouring into the area to look for diamonds, which they found in large numbers.

“The place became very rich, very fast. Actually, the legend says that you could find diamonds even at night, thanks to the moonlight,” says Veillon.

The German government soon declared a huge chunk of the desert a “Sperrgebeit,” a 10,400 square mile protected area for diamond mining.

The story goes that a passing transport worker named Coleman, had ox cart trouble, broke down nearby, and ended up lending his name to the settlement. Kolmanskop, or Kolmannskuppe in German, means Coleman’s Hill.

With the miners came families, and with families came the need for amenities.

Diamond wealth assured a comfortable lifestyle with all the Germanic trimmings. Just imagine it: German-style houses rising out of the desert, along with a school, a casino, a gymnasium, a ballroom, and a bowling alley.

Kolmanskop, unlike many towns back in Germany at the time, had electricity.

In its heyday, Veillon says, around 700 families lived in Kolmanskop.

“There was a swimming pool,” Veillon says. “You don't expect to find a swimming pool in the middle of the desert. I think they imported champagne from France.”

Kolmanskop had its own mini-factory for making ice. It also had its own team of sweepers who cleared the sand off the streets each day.

The first tram in Africa supposedly operated between Kolmanskop and Luederitz. And according to the tourist information on-site, Veillon says, the town's hospital had the first X-ray machine to be used on the continent.

“Although,” Veillon notes with a chuckle, “it wasn't strictly used to heal patients. It was used to see if workers had swallowed diamonds during the day.”

But you know what usually follows a boom like this, right?

In the years after World War I, bigger diamonds were found farther south in the desert. People began to move away from Kolmanskop in droves, chasing bigger gemstones and leaving a lot of their stuff behind. The town limped along until the early 1950s, when the hospital finally closed.

Since then, the town has been gathering dust. Or sand, to be more precise.

“Some of the buildings have been preserved, but some are really covered in sand,” Veillon notes. All around, he says, are reminders of Kolmanskop's quick growth, and even quicker abandonment.

“The school bell, for example, is still there," Veillon says.

The site is still owned by a diamond company called Namdeb (Namibia-De Beers).

Tourists can take a two-hour, guided walk through the ghost town, and a quick YouTube search reveals that musicians sometimes take advantage of the Kolmanskop gymnasium's acoustics.

But to stay the entire day, you have to buy a special permit. Veillon ended up buying seven permits, so he could be there from sunrise to sunset for an entire week, waiting for the light to be just right and for all the tourists to be gone.

“I was sitting in the sand waiting for the good sunlight,” Veillon remembers. “I put my hand in the sand, and I found the bottle of hair tonic still in the box, and I thought, ‘Whoah, that's been in the sand for 70 years.’”

Veillon says ghostly reminders like this are par for the course at Kolmanskop. He likens the strange atmosphere to those apocalyptic movies where all other humans have vanished.

“It’s like it’s haunted," he says. "You can see the miners working there, and going to the swimming pool, or going to the school.”

The site, in fact, has proven popular with filmmakers looking to make a point. It features in some scenes in a horror film called "Dust Devil." And, the BBC has used it in a couple of productions, including one entitled, fittingly, “Life After People.”

During his weeklong stint at Kolmanskop in July of last year, Veillon took some 4,500 pictures. He winnowed them down, and called the set "Les Sables Du Temps," the Sands of Time.

In September, he’ll host an exhibition of his work in Paris. He’s also actively looking for a book publisher, and he’s in touch with the Namibian consulate in France to see if they would like to use some of his shots in their tourism brochures.

I ask him if sees any danger in this kind of “ruins tourism,” which has become trendy of late. Veillon says you do have to be careful, especially in remote areas where you can “run into some bad people” or “fall off a roof.” But, he notes, he never felt unsafe at Kolmanskop.

What’s next on his list of abandoned places waiting to be photographed? Epecuen, Argentina.

It's a tourist town near a salt lake that went completely underwater during a flood more than two decades ago.

“Now the water is going away,” Veillon says. “You can rediscover the city, and with the salt in the water all the buildings are white, the cars are white. You can find a lot of old belongings.”