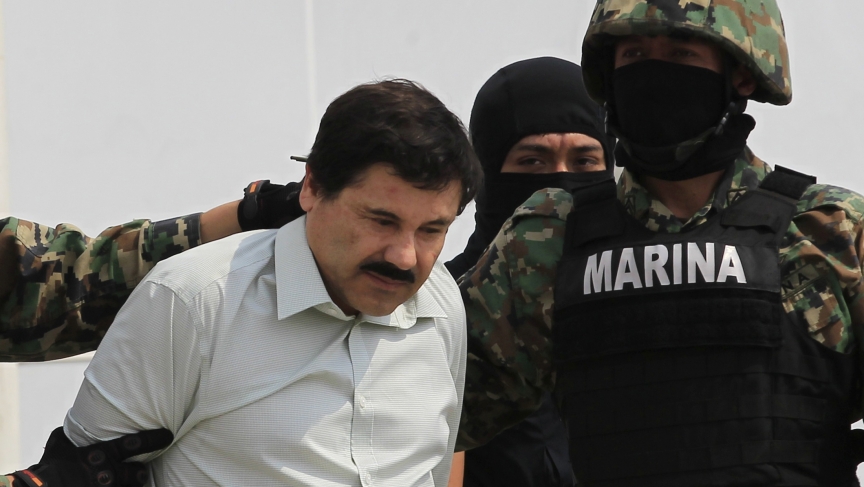 Joaquin "Shorty" Guzman is escorted by soldiers during a presentation at the Navy's airstrip in Mexico City February 22, 2014. Mexico has captured its most wanted man, drug kingpin Guzman, President Enrique Pena Nieto said via Twitter on Saturday.

El Chapo, the kingpin of the Sinaloa drug cartel and one of the most wanted criminals in the world, was captured in a joint US-Mexican operation over the weekend.

His capture challenges many longheld assumptions about the invincibility of cartel leaders and the relative impotence of Mexican law enforcement. Now, the BorderlandBeat site offers a look at the steps that led to the arrest of El Chapo, properly known as Joaquín Guzmán Loera. He'd been on the run for almost 13 years, after escaping from prison with the laundry.

According to Borderland, US and Mexican officials knew about the Mazatlán condo where Loera was staying for two days before moving in for the pre-dawn raid. Reportedly, he grabbed for an AK-47, but was subdued by Mexican Marines before he could fire a shot.

Ukraine's president is of sight, and out of options

Viktor Yanukovych, the now-fugitive president of Ukraine, dropped out of sight over the weekend, just before an arrest warrant was issued for him in connection with the deaths of protesters during the recent protests that eventually forced him from power. Since his fall from power, the world has gotten a better look at the opulence he'd gathered for himself — which further infuriated the protesters, whose initial aim was for closer ties with Europe and more distance from Russia. The Guardian looks at where Yanukovych could be and where he could go next, if he wants to avoid prison.

This is what being a 'supermom' means in Nepal

Januka Rasaeli lives in Nepal and recently gave birth. Practically up until the day she went into labor, Rasaeli worked in the fields, tending to crops, carting water and herding livestock. It's part of the rural culture, and it's not healthy.

PRI's The World reports on efforts by Nepal's government to change the view that pregnant women need to continue with their back-breaking tasks. The aim is to reduce deaths and illness among mothers and their newborns. The story and a video are part of a new series, The Ninth Month, exploring pregnancy and childbirth across cultures.

We'll stop their lasers with our smog

A few weeks ago, a Chinese defense official lauded his country's dangerous smog as a useful defense against enemy weapons. The comments were met with derision and downright anger from many Chinese who suffer from the extreme air pollution, especially in big cities like Shanghai and Beijing. Today, the South China Morning Post brings a new report of a top Chinese Navy admiral citing the smog as a defense against a new laser weapon the US Navy is reportedly deploying for the first time.

This time, Rear Admiral Zhang Zhaozhong is sticking to his guns — or his exhaust pipes. He says the comments were only one small part of his broader comments about the new US laser weapons. And he, rightly, points out that lasers are less effective in smog or fog. “I just stated a laser weapon’s weakness,” Zhang said. “I don’t support smog.” Whether that will mollify any of China's anti-smog advocates remains to be seen.

Vodka hasn't always been Russia's drink of choice. The powerful liquor has a long history there, to be sure, dating back a few hundred years. But even as recently as the 1600s, there was a deep tradition of brewing beers, ales and porters.

PRI's The World looks at how vodka turned into the beloved drink of Russia, and how it came to be used in diplomacy at large banquets with foreign heads of state. "They would have round after round of toasts, in some cases 20 or 30 rounds, before the meal begins. " Mark Schrad says the practice helped tilt negotiations in Russia's favor. He recently wrote the book on it, "Vodka Politics: Alcohol, Autocracy and the Secret of the Russian State."

Heavy fog enveloped the Indian capital of Delhi on Monday, delaying planes and trains and generally making a mess of things, according to DNA India. Humidity at 8:30 a.m. was already at 97 percent.