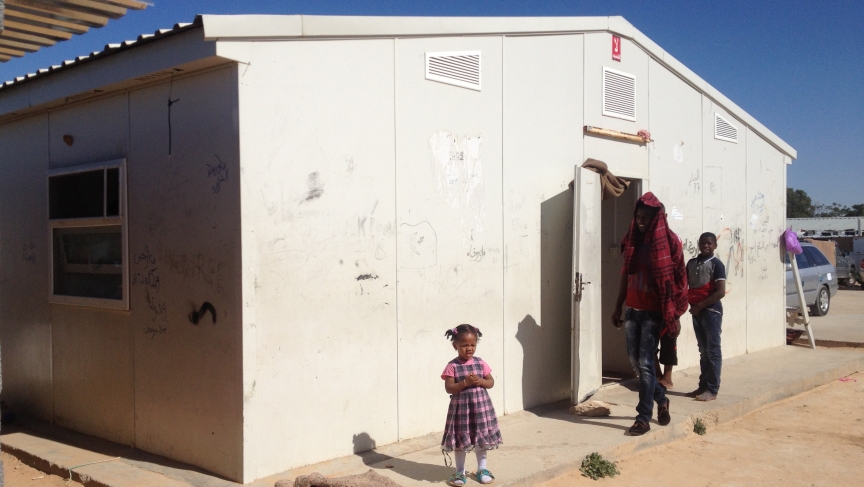 About 300 families from Tawargha live in this camp on the outskirts of Tripoli.

Libyans went to the polls last week to elect the people who will draft the country's new constitution. The vote was long overdue and, at this point, Libyans don’t seem all that engaged. Only about a third of those eligible registered to vote.

That might be because many have lost confidence that things will get better for them.

That’s especially true for one group of Libyans — those who used to live in the town of Tawargha. All 40,000 of them were forced to flee the town at the end of Libya’s revolution in 2011 because they picked the wrong side. They supported Muammar Gaddafi.

“All Tawarghan people love[d] Gaddafi,” says Mabrouk Eswesi, who used to live in Tawargha. He now thinks of himself as a refugee.

Tawarghans are the descendants of African slaves who settled in Libya generations ago. Eswesi says they're a traditional, rural tribe, and Gaddafi liked their simple manners. He sometimes visited on his way to his hometown, Sirte.

Eswesi says Gaddafi did good things for Tawargha: for instance, building houses and doling out scholarships for young people to study abroad.

During the revolution, Gaddafi's forces occupied Tawargha's schools and public buildings. For the most part, says Eswesi, locals welcomed them. Many young Tawarghans even joined Gaddafi's troops. The town became a rear base for the army in the months-long siege of Misrata — some 18 miles away.

“Gaddafi’s forces and the volunteers from Tawaragha would go to Misrata, attack Misrata and come back to Tawargha,” Eswesi says. They’d get food and weapons and then go back to Misrata again.

In the summer of 2011, the tables turned, and rebel fighters finally broke the siege of Misrata. Gaddafi's troops fled, and so did the Tawarghans.

Eswesi says the anti-Gaddafi rebels attacked the Tawarghans in their town and they were forced to flee. “We feel Misrata forces want to kill us. They attacked us in the desert on the road.”

For the militias in Misrata, it was payback time. Tawargha was burned. Scores of people were arrested, and many were killed. Human Rights Watch has called the collective punishment of the Tawarghans a "crime against humanity."

“Misrata has suffered a lot during the revolution, but this is no excuse, of course, for Tawargha also to suffer,” says Libya's Justice Minister Salah al-Marghani. “I hope anyone who has committed a crime against humanity will be brought to trial. Once Libya has stabilized enough, I think we will be able to prosecute those people. However, our highest priority now is to save lives and to make sure that people are not subjected to revenge.”

Misrata’s desire for revenge was, in part, fueled by allegations that some Tawarghans used rape as a weapon during the siege. Justice Minister Al-Marghani says reconciliation will only be possible when these cases are brought to trial. But Libya's new judicial system is still limping along and these kinds of claims are hard to address, particularly as rape is a taboo subject in Libya.

“We have no experience dealing with mass rape,” Al-Marghani says. “We, so far, failed to address the issue of the victims.”

Last week, the Libyan cabinet proposed a plan to recognize women who were raped during the uprising as war victims who deserve to receive compensation, like ex-fighters. That plan would require congressional approval.

In the meantime, hundreds of Tawarghans are still being held without trial in Misrati jails. Al-Marghani says the transfer of prisoners to state-run facilities would accelerate the justice process, and would ultimately pave the way for Tawarghan civilians to begin returning to their abandoned hometown.

For now, though, many displaced Tawarghans say they feel forgotten in the new Libya.

Zahara and her family fled Tawargha in August 2011 and took refuge in Tripoli. A month later, her husband was stopped at a checkpoint. A month after that, his body turned up at a hospital in Misrata. Zahara says her husband was just a civilian who was stopped because he was dark-skinned. Then, he was tortured and killed because he was from Tawargha.

In small rooms, just feet away from an election polling station, Zahara and a dozen women picked through huge piles of dates, selecting the good ones and putting them in boxes. If Zahara fills 90 boxes in a day, she earns a little less than $10.

Elections or not, she says, things can't change soon enough for her and her family.