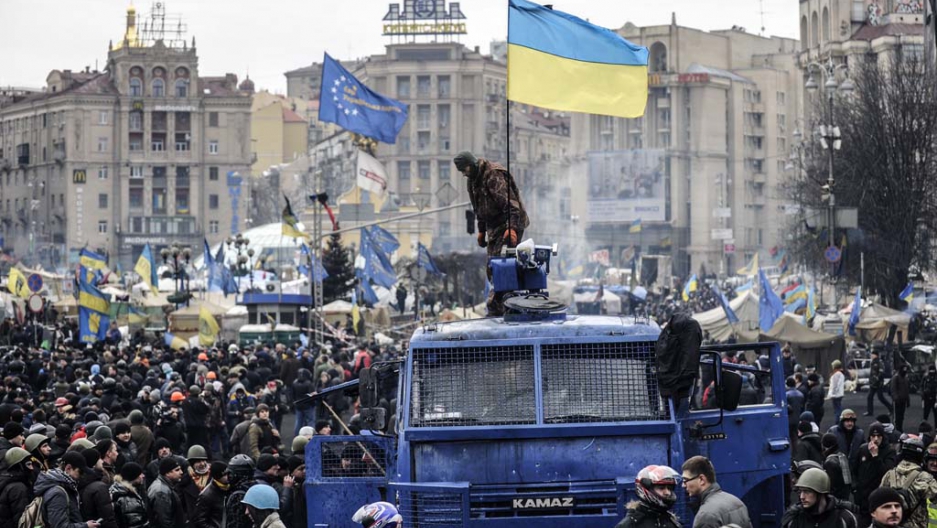 An anti-government protester stands on a police vehicle on Independence Square in Kyiv on Feb. 22, 2014.
Credit: Bulent Kilic
Share

KYIV, Ukraine — After two days of relative quiet, Kyiv's Independence Square once again filled with the sound of explosions.

But this time it was fireworks, not grenades.

Saturday saw rapid-fire developments in Ukraine, each one seeming to dismantle more and more of the existing regime.

Reports as early as Friday evening said President Viktor Yanukovych had fled Kyiv, and gone eastward to the city of Kharkiv, near Russia. By Saturday, protesters laid claim to his residence and the entire capital city.

Meanwhile, behind closed doors, some 300 lawmakers worked to take over power. Parliament impeached Yanukovych on Saturday, and planned early presidential elections for May 25.

"Yanukovych ran away and this is our victory," said Pavlo Kuchapin, 24, one of the thousands protesters in the square on Saturday.

Anti-government protests have been ongoing for three months, and protesters are clearly overjoyed to have something, finally, to celebrate.

Their excitement, however, is marred by the memory of some 70 protesters who died when clashes with police turned violent this week.

The mood in Kyiv's Independence Square, the epicenter of protests, reflects those mixed emotions. Mourners have strewn flowers to honor the dead. Every now and then political talks on the stage stop to give way for prayers.

"It's not a complete victory yet, but this gives us the way to make changes," said Kuchapin, smiling.

Yanukovych is not giving up just yet. In a video interview released just before parliament's vote, he said he was not going to resign.

"I'm a lawfully elected president," Yanukovych said. "What we see today is a coup."

Over a week, moods in Kyiv have fluctuated tremendously.

On Tuesday, a series of violent clashes between police and protesters took place, leaving more than 20 dead and many wounded on both sides. Police took over and destroyed half of the protesters' encampment at Independence Square.

Protesters took over the square again on Thursday, but lost some 40 men — almost all shot dead by snipers.

On Saturday, Yanukovych's infamous mansion near Kyiv, Mezhyhirya, suddenly became open to public after the security guards abandoned the premises. Protesters speak of plans to turn the luxurious residence, a symbol of state corruption, to a camp for children.

Many anti-government protesters ask for more than the president's removal.

"It is not a real victory 'til Yanukovych is punished for the bloodshed his police caused. He must stand trial, and it is better to be an international trial," said Viktor Katerinchuk, 45, who had been present at the protests for months now.

As Kyiv basked in victory, the spotlight shifted to Kharkiv, an eastern Ukrainian city where Yanukovych's loyalists called a meeting of local council deputies who claimed to have taken over.

In a symbolic flow after Yanukovych's ebb, former Prime Minister Yulia Tymoshenko made her way from Kharkiv to the square, newly free from jail.

Tymoshenko had been in jail since 2010, but parliament paved the way for her release on Friday by voting to decriminalize parts of the criminal code.

"Tymoshenko should come to the stage at Independence Square. She is not perfect, but she is a strong and experienced politician. She will know what to do," said Yuliya Shavlovskaya, 29, a protester from Kyiv.

But on this point, there is some disagreement between protesters, perhaps foreshadowing future complications and divisions yet to make themselves known.

"I don't like that Tymoshenko will walk free now," said Kuchapin, another protester. "People who died didn't die for her. This protest is not about her."