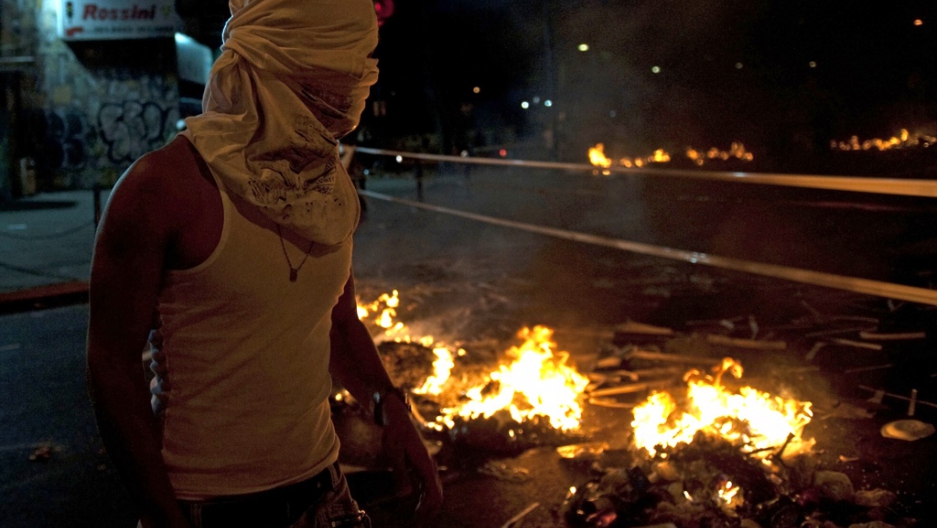 A Venezuelan protester lights a fire during clashes with riot police in Caracas on Feb. 20.
Credit: Raul Arboleda
Share

BOGOTA, Colombia — As anti-government protesters descended on Caracas’ main plaza this week, marcher Eiker Ramirez called a Venezuelan living in neighboring Colombia and asked her what was happening.

“They’ve got the whole avenue militarized,” Gonzalez told him via cellphone.

She warned Ramirez to avoid possible clashes between opposition demonstrators and government forces or the armed militia supporters of President Nicolas Maduro, after a wave of violence over the past week has left eight confirmed dead.

“You’ve got to go through the other way. There isn’t any other route,” she said.

Since the Maduro government blocked access to a range of visual media covering the protests, young Venezuelans abroad have resorted to online social networks to keep family and friends inside the country informed.

This is part of a global trend where young people from Kyiv to Tehran, Cairo to Rio de Janeiro have swarmed to social media for organizing, spreading the story, and voicing anger at their leadership.

Venezuela’s government, also an avid tweeter, is well aware of this. The authorities are now blocking websites and cutting off the internet in parts of the country after bloody scenes from the clashes went viral.

With very few remaining independent and critical local media, President Maduro is also cracking down on international broadcasters he deems dangerous to the stability of his regime. The country's telecommunications regulator took a Colombian network off the air last week. Now, Maduro is threatening to do the same to CNN.

“The government has launched an investigation into CNN. And they’re the very last channel on the air with a voice. If we lose CNN, the country goes blind — it’ll be an absolute blackout.”

Telecom regulator CONATEL, Di Cecilia explained, has threatened news anchors and broadcasters with heavy fines against their companies or getting taken off the air if they communicate information that the government considers to be “destabilizing.”

This has scared the national media into "a form of self-censorship," she added. “Basically everything expressed in opposition to this government implies ‘fascism’ or ‘destabilization’ … so they refrain from publishing it.”

In an attempt to muffle the noise of protests, Maduro’s government blocked images on Twitter last week, a spokesman for the social site told Bloomberg. After three days, Twitter’s image-publishing service was back online there, but other outlets have suffered.

Not long after that, the government removed NTN24, a Colombian 24-hour TV news station, from Venezuelan televisions after the network showed footage of violent clashes between police and protesters.

As the protests crescendo, the Committee to Protect Journalists condemned Maduro’s actions toward the press, saying, “Media blackouts, arrests, and a campaign of harassment against dissenting voices has become a hallmark of this administration.”

Gonzalez insists that citizen journalism through social media has become the only way for Venezuelans to publish and verify information as the government tightens its control over traditional forms.

On top of that, many protesters are relying on people like Gonzalez who are safely outside the country to monitor social networks since many protesters can’t get internet access on the streets to find out where violent flare-ups are happening.

“We’re trying to publish the human rights violations that are happening,” Gonzalez said. “That’s what is not getting published on [Venezuelan] national television right now and these images need to be seen.”

The tone of Venezuela’s protests is eerily similar to other violent clashes around the world, including Ukraine and Brazil. Deadly and lasting clashes in all three countries started with smaller rallies of young people — many of them college students — protesting the government plus a host of social and economic woes.

Venezuelan protesters are speaking out against a deepening economic crisis, high crime levels and corruption. Many feel strongly that President Maduro is incapable of solving the problems that lie ahead, while his staunchest critics say he's making those problems worse.

Indeed, Venezuela’s economy is in shambles. Consumer prices are up a whopping 56 percent. Many basics — like food and medicine — are widely unavailable across the country.

Yet, as to the causes and solutions to these problems, Venezuela is very polarized. That's clear just by watching the demos. Ardent government supporters have also swarmed the streets in counter-protest. Many Venezuelans still support the left-wing movement launched by the late Hugo Chavez in 1999. And they fear that Chavez’s disciple, President Maduro, is right: that his opponents are “ultra-right-wing fascists” backed by US interests who are trying to incite a coup — lines that are repeated by most national media outlets as fact.

Not 25-year-old Giovanna Delgada. She's a Venezuelan teacher who fled her native Caracas a month ago after finding that the economic situation had become intolerable for her profession. She now lives in Dublin, Ireland.

Commenting on Venezuela’s rampant inflation, Delgado says, “If I were working as a teacher in Caracas right now, I’d be dying of hunger.”

In addition to inflation problems, Venezuela’s debts are piling up and its foreign currency reserves are dwindling. It owes $3 billion to foreign airlines, and roughly $9 billion in private-sector imports. And even though Venezuela sits on top of what many agree to be the world’s largest oil reserves, it isn’t reaping all the rewards it could from its oil sales.

Right now, Venezuela is sending hundreds of thousands of barrels to pay off $40 billion worth of debt to China, one of its main trading partners.

Instead of claiming responsibility and confronting deep-seated economic problems, Maduro seems to be putting more energy into measures that quell the dissent. Over the weekend the government ousted three US diplomats and, on Tuesday, arrested opposition leader Leopoldo Lopez for inciting the marches.

Lopez, a 42-year-old Harvard-educated local mayor, is among those Maduro labels a “fascist.”

How Lopez’s trial in the courts, and Venezuela’s trial on the streets, shape up over the next week should tell the world a great deal about President Nicolas Maduro’s leadership. That is, if he doesn’t shut down the story on social media before Venezuela’s citizen journalists tell it.

Back in Bogota, as she scrolls through her Twitter feed showing images and videos of violence from the day in Caracas, Yoselie Gonzalez asked out loud to herself, “How did we come to all of this? This isn’t my Venezuela.”