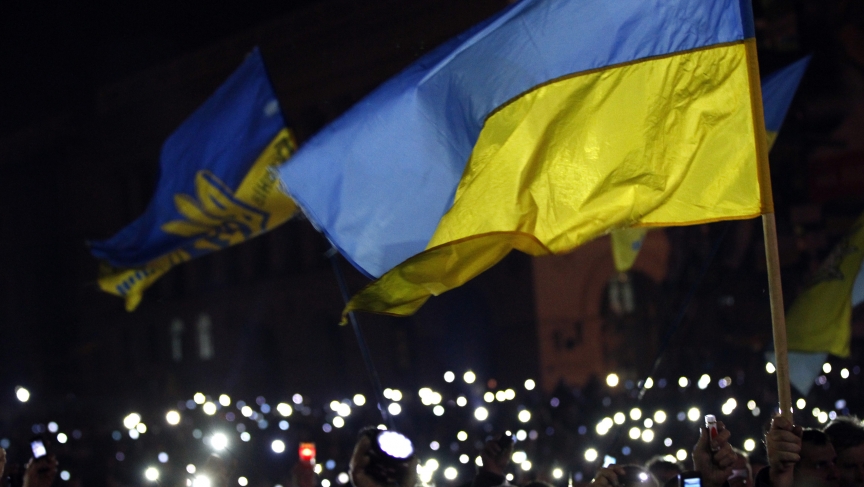 Anti-government protesters lit flashlights and mobile devices in Kiev's central Independence Square in honor of the protesters who died this week in clashes with government forces.

Ukraine's President Viktor Yanukovych appears to have blinked in his confrontation with the protest movement.

In meetings attended by leaders of the protest movement and officials from Russia, France, Germany and Poland, Yanukovych made a series of concessions to try and end the ongoing protests. Still, the hardcore protesters occupying downtown Kiev are not satisfied.

The violence in Ukraine died down Friday as news of the deal spread. Under the deal, the country reverts to the 2004 constitution that limits the power of the presidency. A coalition government is to be formed; presidential elections will be brought forward to December of this year; opposition leaders will work to get Kiev and other affected cities back to normal; and the government pledges not to declare a state of emergency.

But that may not happen, for a variety of reasons.

"In the square," says Canadian Broadcasting Company (CBC) correspondent Margaret Evans, "I didn't meet a single person who was happy that the deal had been signed. They don't think it goes far enough. They've always said, 'we're not going till Yanukovych actually resigns.' And nothing seems to have changed that."

Evans says people don't trust Yanukovych. They see the hand of Russia in government actions. "They didn't like the fact there was a Russian envoy in the discussions. They see it as a time-buying tactic. They all call Yanukovych a bandit. And they simply think he'll use this to gather his resources again and they'll be back in the same place a few months later," she says.

Already, there are signs the deal may not stand up. Russia refused to sign on, reports The New York Times, leading many to wory they may use indirect methods to pressure Ukraine not to follow through with its commitments.