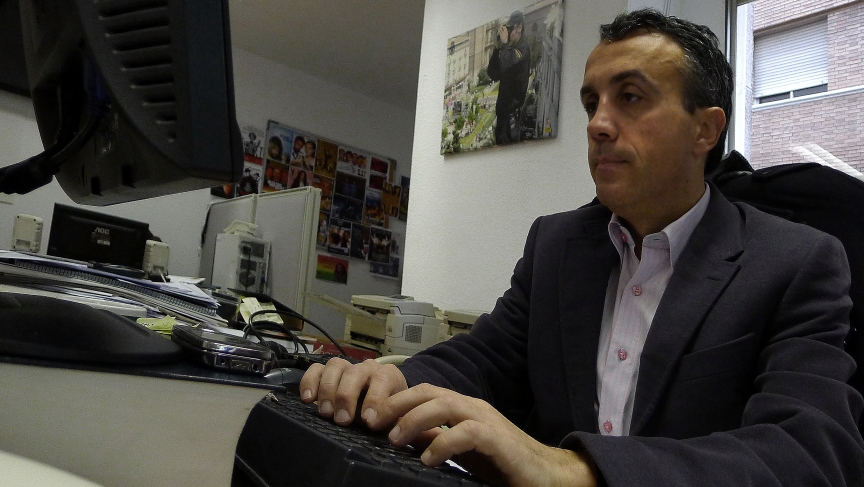 Carlos Fernandez at his computer.

You hear a lot about community policing around the world. Trying to get officers and citizens to know each other and cooperate more.

Spain’s National Police is giving it a shot. Not with more beat cops, though, but via Twitter. Behind the account is one man, a smartphone, and a gift for gathering followers.

The Twitter guy at Spain’s National Police is Carlos Fernandez. He claims his force is now the most followed in the world — surpassing even the FBI.

“We now have 756,000 Twitter followers,” he said on a recent morning at police headquarters in Madrid. In the days since that interview, his following has grown to 769,000.

“It is more than the FBI’s, but that’s just anecdotal,” said Fernandez. “The most important thing is the service we provide. Citizens give back. They cooperate.”

He gives an example from January of this year, when the police were searching for three fugitives. “The last was still on the loose,” he said. “I sent out just one single tweet, with the guy’s photo. It got retweeted 6,300 times.”

It ended up reaching 4 million people. “We started getting calls and emails,” he said, “which led us to the guy. We arrested him.”

But, sometimes, it’s not about arresting anyone. In fact, his most shared tweet of all time had nothing to do with crime.

“It was when I asked for volunteer blood donors after the high speed train crash in Galicia last year,” he said. “That one got retweeted 17,000 times.”

Fernandez said the trick is not acting like a cop. Which he’s not actually. He’s a marketing guy — on staff, but not an officer.

“I always try to think from the public’s point of view,” he said. “Because if we’re just staring at our own belly buttons, people will lose interest.”

He said that a day earlier, the director of the police had paid a visit to the commissary in the city of Lerida. But he didn’t tweet that. Why?

“Because it wasn’t funny, interesting or useful.”

Fernandez said another key is his offbeat, hip tone. Coming from the police, it shocks people. Then they click the follow button. Here’s an example tweet (translated into English).

Fernandez said he sees himself as the Starsky, or Hutch, of social media. Those were the hip cops of American television.

But all this has rankled a few among the ranks, who fear Fernandez is undermining their reputation for authority.

“Some 2 percent or 3 percent of the force don’t like it,” he said. “They say, ‘Carlos, remember, we’re the police.’ The rest are on board. But it took a while.”

As to whether the huge Twitter following translates into better police relations on the street? Fernandez said he hears, anecdotally, from officers that it does. And it helps to remember that just a generation ago, under the dictator Francisco Franco, Spain’s national police were generally feared.

You probably would have thought twice before sharing 140-character messages with them.