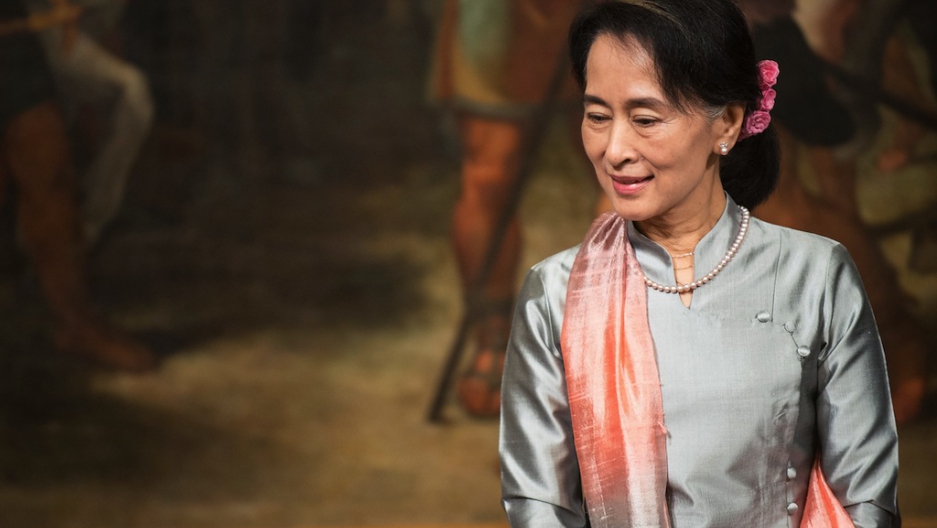 Nobel Peace laurate Aung San Suu Kyi attends a meeting with Italian Prime Minister Enrico Letta at Palazzo Chigi on October 28, 2013 in Rome, Italy. Aung San Suu Kyi was awarded the honorary citizenship in 1994 but had been prevented from receiving it after being kept under house arrest until November 13, 2010, by Burma's former military junta.
Credit: Giorgio Cosulich
Share

CHICAGO — For the past 18 months, the US Government and the American people have been buoyed by optimism about Myanmar. And, as a scholar of social justice leadership and the work of Aung San Suu Kyi,  the beloved voice of Burma’s freedom movement, so have I.

The other week, that changed. But I still see hope, somehow.

Hope against odds has been a longtime theme for Myanmar-watchers. Amidst the violent chaos of Libya, Egypt and Syria, Myanmar seemed exceptional: 1,100 political prisoners gradually released; draconian restrictions on press freedom lifted, and prohibitions on public gatherings eased.

When a small election held in April 2012 seemed open and fair, spirits, including mine, soared. The non-violent transition from despotism to democracy envisioned by Suu Kyi seemed possible. People drew glib parallels with Mandela, whose sacrifice was analogous, and with Gandhi, whose ideas Suu Kyi espoused.

But daily reality has obviated such comparisons.

Gandhi’s situation was also different. Whereas he, with the politically expert Nehru at his side, could focus on principle and human rights, Aung San Suu Kyi sees no choice but to engage in low-level legislative politics, courting influence one reluctant peer at a time.

Where the parallel does apply is in the extravagance of empathy all three bring to the fight for human rights — a willingness to extend to the oppressor the same compassion its extends to the oppressed. It is killingly difficult. And the story is not over, yet, for Aung San Suu Kyi.

When I was in Myanmar in March, everyone with whom I spoke — dissidents, academics, journalists, writers, artists, taxi drivers — expressed concern as they watched the leader they still call “The Lady” navigate. (“The Lady” was code the people invented in years they were forbidden even to utter her name.)

Photos of her listening, meeting, talking with people who had formerly been her captors worried them. Would she really be able to make headway, they asked, among people who hated her?

Khine Win, who teaches leadership to heads of NGOs, explained to me simply, during my recent visit, “They own everything and they are everywhere.”

“They will sap her strength and erode her credibility,” worried Win Tin, journalist, former political prisoner, and co-founder of the National League for Democracy, as we looked together at images of her reviewing troops beside generals.

So in July, when Parliament appointed a committee to solicit public opinion on the despised constitution, people were pleasantly surprised. Maybe Aung San Suu Kyi was getting through after all. Maybe this was real.

Hopes rose, especially when people offered input with no reprisal. Merely three years before, responding to such an invitation would have brought a military Intelligence van screeching to the door.

Spirits lifted another notch in December when the president, a former general, said on radio he would support constitutional change and the military’s political party followed suit. In early December, Judith Beth Celfkin, the State Department’s Senior Advisor on Burma, could tell the House Committee on Foreign Affairs Subcommittee on Asia and the Pacific, “We are encouraged that Burma’s parliament appears serious in working to reform such deficient laws....”

But now it all seems a throwback ruse. The long-awaited committee report, released January 31, said there was insufficient popular support to change Chapter 1, the despised section that guarantees military control by reserving 25 percent of the seats on every legislature to military appointees, and requiring 75 percent vote to amend. How could that be? The Democratic Voice of Burma reported. “Only 367 proposals opposed amending the charter, while a crippling 41,391 supported change.”

Equally incredible was the assertion that Article 59f, the clause designed to keep Aung San Suu Kyi from executive office, had popular support. It all seemed a return to Orwellian days when those in charge distorted reality to confirm their worldview.

It is premature to conclude that it signals that Aung San Suu Kyi’s extravagant empathy is a failure, but that idea is in the air.

On Facebook this week “Burma watchers” are circulating a cartoon in which Than Shwe, the retired senior general known to hate Aung San Suu Kyi, amusedly plays with the US and the Lady.

Depicted as a huge tree, Than Shwe looms over two saplings — the torch-bearing arm of liberty and a diminutive Suu Kyi. With his right hand the grinning general sprinkles water while with his left he fingers a pruning knife.

Aung San Suu Kyi, for one, is not ready to concede. On February 4, she spoke with journalists, gently repudiating the report and challenging her colleagues. “Parliamentarians need to be brave, and we will see whether the Parliament’s decision is for the people or if they are not brave enough to stand for the people who voted for them.”

Clearly, she has decided to soldier on. And we should too. The report is, after all, only that. Parliament can, as Suu Kyi suggests, choose to go beyond it.

“We should anticipate that along with steps forward there will be inevitable setbacks,” Celfin cautioned Congress in December. This is surely one. Its importance cannot be overstated, nor can its ominous echo.

The generals are expert at delay. For 24 years they promised to move toward democracy: in 1990, as they nullified a valid election calling for a constitution; in 1994, as they laid out a laborious “Roadmap to Discipline-Flourishing Democracy,” and in 2008 as they promised constitutional reform.

We cannot allow them to stall now. Without pressure, they will. We cannot let go of our hope and must continue to practice the extravagant empathy that Aung Sang Suu Kyi has modeled for us. It’s the least we can do.

Susanne Dumbleton, a Public Voices Fellow with The OpEd Project, is a professor and former dean at DePaul University. She is writing a book on the roles of Aung San Suu Kyi, Wangari Maathai and Helen Prejean as leaders for social justice.