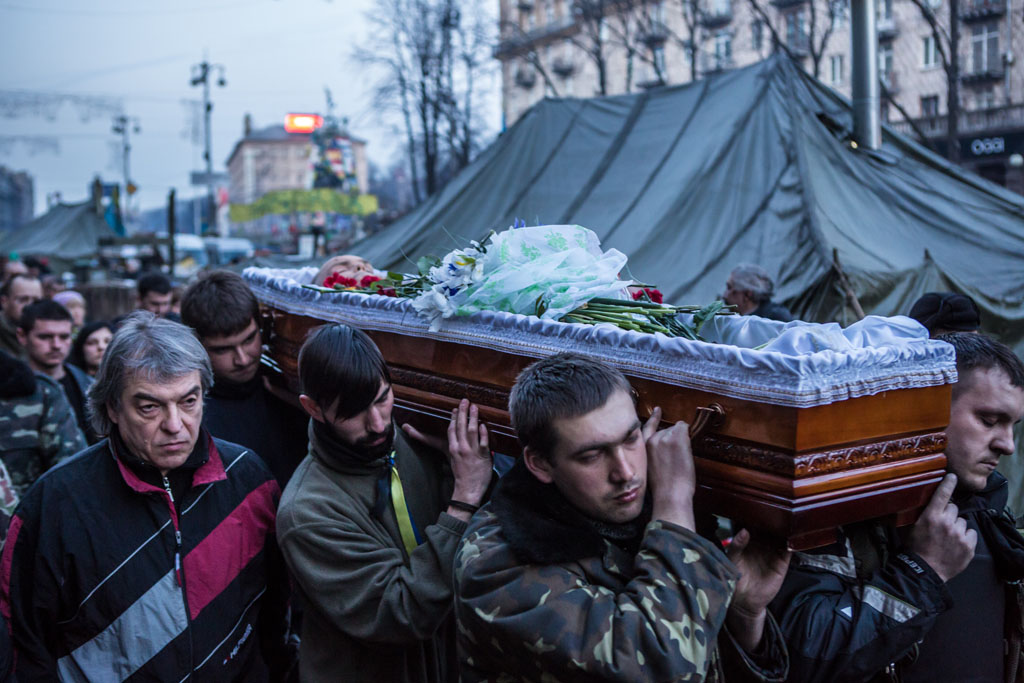 The body of Ustim Holodnyuk, 19, who was killed in fighting between anti-government protesters and police, is carried from Independence Square on February 21, 2014 in Kyiv, Ukraine.
Credit: Brendan Hoffman
Share

Ukrainian President Viktor Yanukovych signed a deal with opposition leaders Friday with the hope of ending a crisis that has gripped the country since last November.

The agreement came after a violent week in which at least 77 people were killed in clashes between protesters and riot police, and Kyiv's Independence Square saw bloody, fiery clashes.

The deal would mean Yanukovych would hold elections before December and form a national unity government. Ukraine's parliament also voted to revert back to the 2004 constitution, which would remove some of Yanukovych's powers.

Ukraine's parliament also voted for amendments to the criminal code that could see former prime minister and opposition leader Yulia Tymoshenko being released from prison. She has been in jail on what many call trumped up charges of abusing her authority since 2011.

GlobalPost talked to Olga Rudenko, an editor at the Kyiv Post, about the reaction in Kyiv's Independence Square — the epicenter of the protests — to the deal.

How have protesters reacted to news of the deal signed by Yanukovych and opposition leaders?

listen to ‘Protesters are not happy with the deal’ on Audioboo

Summary: It was very crowded in Independence Square today, with crowds mostly reacting to the aftermath of the violence yesterday that killed dozens of protesters. Protesters don't like the deal, that is for sure.

While they feel good about a new government and amnesty for protesters, they are angry that Yanukovych is allowed to stay in power until December.

They want him to be prosecuted for the violence. Most of the protesters, based on interviews, see Yanukovych as responsible for the deaths that happened.

Has signing the deal with Yanukovych changed the protesters' views of the opposition leaders (including Vitali Klitschko and Arseny Yatsenyuk)?

listen to ‘Revolution will go on until Yanukovych resigns’ on Audioboo

Summary: Protesters said they don't want opposition leaders coming to the stage of Independence Square with news like this [deal]. While it's certainly a compromise and no one gets everything they want, protesters are not happy with it. They are ready to part with their leaders and continue the revolution on their own.

One of the leaders of the nationalistic group called Right Sector said the revolution of the Ukrainian people will go on until all the demands are fulfilled, and one of the main demands is that Yanukovych leave office as soon as possible.

Will the news that opposition leader and former Prime Minister Yulia Tymoshenko might be released from prison change much in EuroMaidan?

Summary: From the protesters' perspective, Yulia Tymoshenko is hardly seen as the leader of the people. Some of the members of her party placed a huge banner on the square, which caused a lot of controversy and debate. Protesters said their fight was not about Tymoshenko, but about human rights in Ukraine.

The protesters have never voiced a clear demand for Tymoshenko's release.

Have any new figures emerged since the protests began?

listen to ‘Emerging voices of the protest movement’ on Audioboo

Summary: Two figures who have emerged since the Kyiv protests began are the radical group Right Sector's leader, Dmytro Yarosh and lawmaker Andriy Parubiy. Yarosh wasn't a public figure before the protests started. He's supported by the radical protesters.

Parubiy used to be a member of Tymoshenko's former party. He took responsibility for how the protest camps function, overseeing the makeshift kitchens and medical centers. He earned a lot of respect, by taking charge of the daily life of the city-within-a-city.