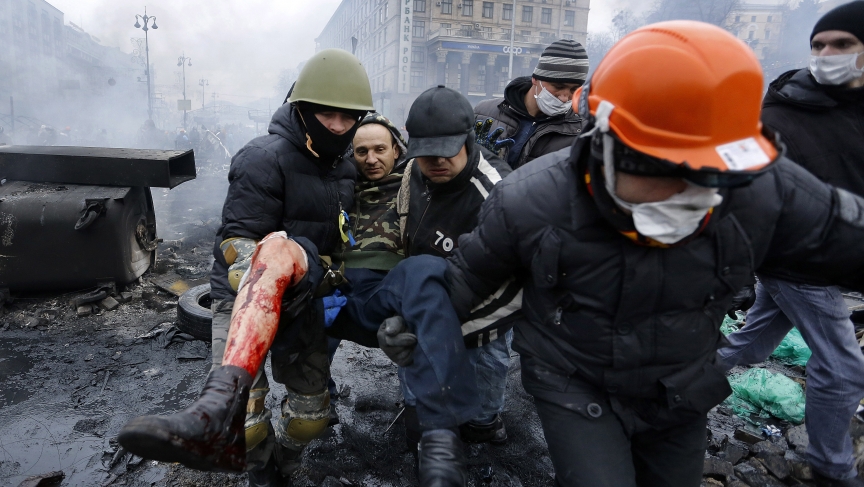 Anti-government protesters carry a man with a bullet wound on his leg during clashes with riot police in Independence Square in Kiev, February 20, 2014.

A "truce" in Ukraine declared yesterday collapsed on Thursday morning and the capital of Kiev experienced its bloodiest day since the start of anti-government protests late last year. More than 21 people died in violent clashes between protestors and security forces. Government snipers fired on people in the street. Demonstrators threw firebombs.

At various times over the last few months, it appeared that the demonstrations in Kiev were quieting down. So, what happened?

Ukraine analyst Olexiy Solohubenko with the BBC World Service in London says very little happened and that was the problem.

"I think they escalated because of the inability of the government to address those demands that were initially very, very modest," Solohubenko says. These were "demands of closer relations with the European Union, rather than going back to Russia as the old partner from Soviet times."

The government of President Viktor Yanukovych probably thought it could outlast the protestors in the streets, he adds. "They disregarded the numbers. They didn't want to engage in any meaningful negotiations." And then a cycle of violence started at the end of last November.

Yanukovych has made promises he either could not, or would not, keep, Solohubenko says. "The latest promise was yesterday about 'truce' and, obviously, riot police in Kiev didn't hear the word 'truce,' or didn't listen."

It is not entirely clear which side broke the truce on Thursday morning. "But what we can say," Solohubenko explains, "is that [the] level of brutality on behalf of the [government] troops is hardly justifiable."

He says most of those killed over the course of the day in Kiev appear to have died from gunfire.

Asked about the Ukranian opposition, Solohubenko says it is made up of an uneasy mix of different groups, including members of far-right, anti-Russian, anti-Semitic groups.

"It's a self-styled opposition," says Solohubenko. "It represents political parties in Kiev, but it doesn't necessarily represent everybody that's coming out into the streets to protest."

"Some [protestors] were radicalized groups of young people throwing stones, petrol bombs and the rest of it," he says. "But others were not. And I think it's important to stress the bulk of the protestors, the bulk of those who oppose this government of President Yanukovych, are peaceful citizens."

"Their demands are rather modest," he says. "Early elections, for example, or compromise regarding the constitution. They don't want the armed overthrow of the regime."

"It's an awkward partnership, because it's a marriage of convenience with some very unsavory characters there."

The crisis is not limited to the Ukranian capital. There have been attacks on police headquarters, prosecutors' offices and security services, Solohubenko says. Arms depots have been raided. Troops have refused orders to deploy to Kiev.

The mayor of Kharkiv, Ukraine's second-largest city which lies in the eastern part of the country — and the heartland for pro-Russian supporters of Yanukovych — has called for anti-government protestors to be physically eliminated. In the Crimea, Solohubenko says, there has been open discussion of secession.

It is difficult to see how Ukraine gets out of this crisis, but Solohubenko says the first thing that needs to happen is for the violence to stop.

The Yanukovych government must give the order to its security forces to stop using live ammunition against protestors, Solohubenko says, and then pull its troops out of Ukrainian cities. But he says it is not clear if government forces would even heed such an order from the president.

"I'm afraid now the situation is extremely volatile and unpredictable and there isn't a simple or optimistic answer," he says.